Bizarre footage has emerged over the weekend, after a suspect threw himself into the River Thames - despite being tasered THREE TIMES. 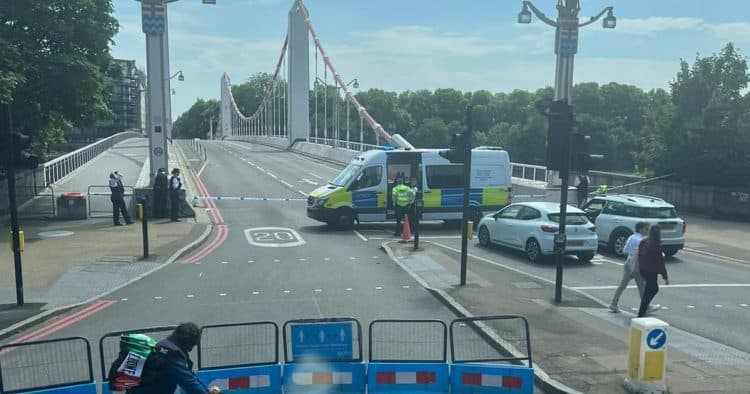 A bizarre event has played out on Chelsea Bridge this weekend, after a man armed with a screwdriver was tasered three times by police – before jumping into the River Thames from a great height.

Man tasered on Chelsea Bridge – then jumps into River Thames

The plunge, combined with the affect of the taser, have left the suspect in a critical condition. He’s now receiving top-level hospital care, after he was eventually rescued from the chilly waters.

In the minute-long footage shared on social media, two officers confront the male – said to be in his forties – after Chelsea Bridge was closed to the public. Just as the stand-off looked to have reached a conclusion, the tasered citizen to launched himself into the river below.

Initially, police officers had been questioned about how they allowed the suspect to clamber over the bridge and into the Thames. Detective Chief Inspector Rory Wilkinson has confirmed a full investigation is now underway.

“My thoughts are with this man, who is extremely unwell in hospital. Officers are making every effort to make contact with his family.”

“I understand that there are always concerns about incidents in which people come to harm having been in contact with police. All Met officers know that they are accountable for their actions, and a full investigation is under way to establish exactly what happened.”

Initially, a wave of confusion greeted the incident, with several media houses reporting that the suspect ‘fell off the bridge’, as a result of the police response. However, the video footage proves this is not the case.

The male was tasered on three separate occasions, yet still refused to comply with officers. His last-ditch escape attempt has now left him in a life-threatening condition, and the Directorate of Professional Standards is set to review the matter.