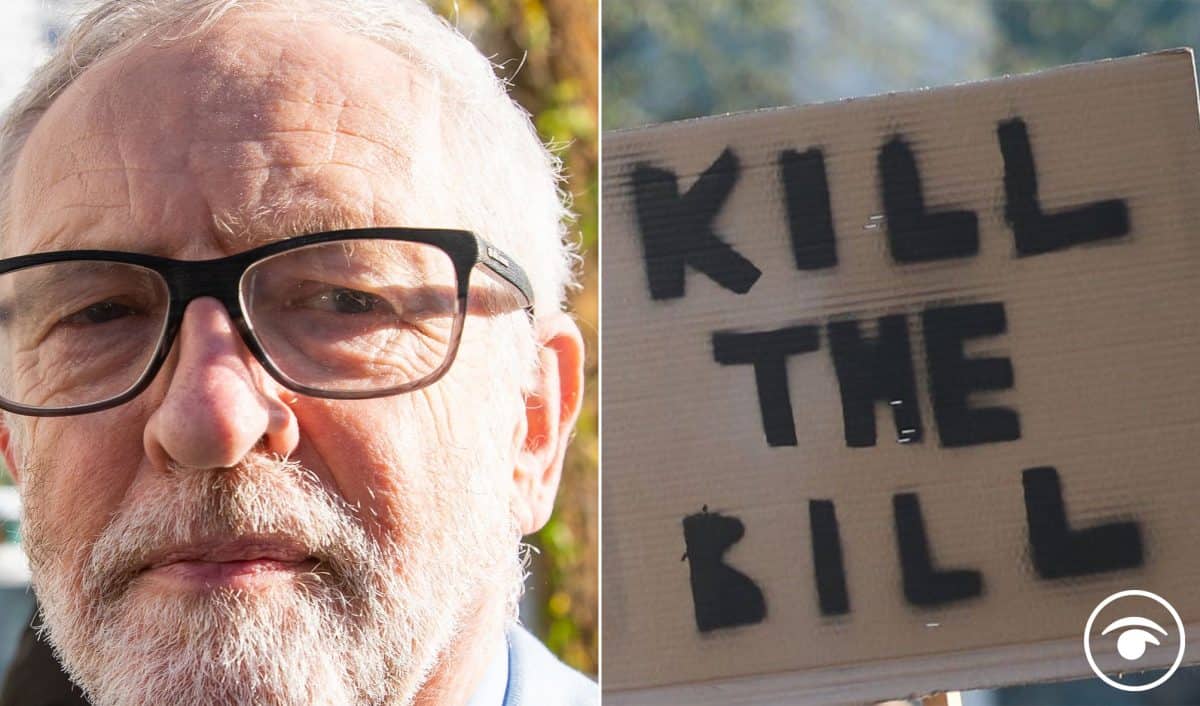 People have taken to the streets in towns and cities across England in demonstrations against a crime bill they fear will limit their right to protest.

Kill the Bill protests have been staged in London, Newcastle, Birmingham, Liverpool and Bristol, despite the lockdown restrictions.

Protesters, including many who carried anti-sexism placards and chanted “women scared everywhere, police and Government do not care”, passed Downing Street.

Organisers reminded demonstrators to stay socially distanced as crowds grew to more than 300 in London’s Parliament Square, where speeches were made opposite the Houses of Parliament.

Several women addressed the crowd and shared personal experiences of suffering abuse and being drugged.

The protests have been sparked by the proposed Police, Crime, Sentencing and Courts Bill, would give police in England and Wales more power to impose conditions on non-violent protests, including those deemed too noisy or a nuisance, with those convicted liable to fines or jail terms.

There were scuffles between police and protesters in Parliament Square on after thousands marched in opposition to the bill from Hyde Park.

Protests on March 23 and 26 in Bristol ended in clashes between the police and protesters.

Placards carried by protesters included slogans such as “educate your sons”, “misogyny is the virus”, and “girls just wanna have fun-damental human rights”.

Many people who were carrying Kill the Bill placards also gathered at Hyde Park in central London.

Former Labour leader Jeremy Corbyn told the crowds in London that the  Bill as a “very dangerous, slippery slope,” as he defended the right to protest.

To cheers and applause, he said: “If we don’t protest, things don’t change.”

Zarah Sultana, the Labour MP, said: “Power is with us, it’s with you, it’s with all of us … I know that because now I am in the so-called corridors of power, and they are scared of what we can achieve in the streets, they are so scared.”

Jeremy Corbyn speaking today at the #KillTheBill protest. His passion for social justice shines as bright today as it has ever done.
pic.twitter.com/shZOBPZHeY

The Metropolitan Police said the “majority” of people at Saturday’s events in central London had tried to adhere to social distancing and to Covid-19 legislation rules.

A “small minority” had been blocking the road at Parliament Square, police said.

Tensions with the police service are running high following the arrest of serving Met Police officer Wayne Couzens for kidnap and murder of Sarah Everard and Met probationer Benjamin Hannam being convicted last week of belonging to a Neo-Nazi organisation.

#KillTheBill in London is big, lively and now with added base.

Not yet had a vantage point good enough to estimate turnout, but there are certainly thousands here. pic.twitter.com/XxfvDnV4cP

Scale of the #KillTheBill protest in #London now pic.twitter.com/WB9SBraTj1

good afternoon, this is @bencsmoke, Huck’s politics editor, reporting from central london where today’s #killthebill demonstration is underway. there’s a carnival atmosphere here as a crowd of thousands slowly make their way down Park Lane pic.twitter.com/DqFyxNpMEP

“I don’t know how a country that colonised 22% of the world can say that they are the model country for racial equality.”

Dorset Police thanked those who took part in “peaceful protests” in Bournemouth and Weymouth and stuck to the Covid-19 restrictions.

Dorset Police Superintendent Richard Bell said:  “We have always sought to find the right balance between the rights of protesters and those of residents and businesses, while also considering the very real risks from the spread of the virus.”

There was a low-key response from Northumbria Police as hundreds of  people gathered beneath Grey’s Monument in Newcastle.

Protesters, including one who held up a placard saying “we will not be silenced”, cheered as a singer with a guitar performed in opposition to the proposed bill.

Demonstrators who marched from the monument through Newcastle city centre chanted: “Whose streets, our streets.”

Many took the knee at the Civic Centre and held a minute’s silence for victims of oppression, after which a round of applause broke out.