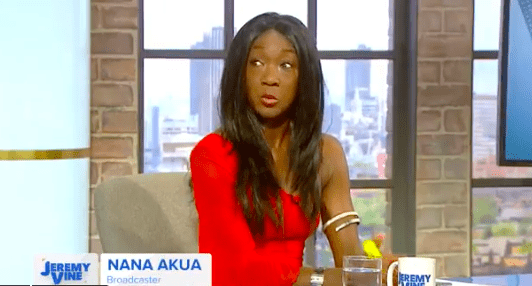 A GB News host has been criticised for an “extraordinary lack of empathy” after saying Border Force officials shouldn’t rescue refugees drowning in the English Channel.

Appearing on Jeremy Vine’s Channel 5 show alongside writer Jemma Forte, Nana Akua was discussing Priti Patel’s to give officers immunity from prosecution should migrants drown while crossing to the UK in small boats.

Akua – who presents a show on GB News – said it was “fair enough” for British officials not to rescue drowning migrants.

She said: “If people have come across from the Channel, from France, which is safe, why they would want to take a dangerous border crossing and then have to be rescued… Basically, what often happens is they throw themselves overboard so they then have to do a rescue mission, which is part of maritime law.

“I personally think… look, as long as you know that if you come across you won’t be rescued if your boat sinks, I think that’s fair enough, and that’s why they’re saying if they come across with jet skis, then they can’t rescue them, it will actually hopefully stop the people trafficking, because if you are supporting that they should be rescued, you’re actually supporting people trafficking which means that more people will come across because they think they’ll be ok.”

Forte replied that it was “one of the most disgusting things I’ve ever heard in my life”, pointing out that refugees crossing the Channel are “desperate”, and are often fleeing war-torn countries like Syria – causing Akua to interject and say they were “coming from France”.

Vine said: “We still have a situation where our paid officials will be on a boat, and they’ll look at a father jump off a dinghy with a child”, but Akua interrupted to say: “But why would he jump off a dinghy? He shouldn’t do that.”

She added: “Don’t go on the boat. You’re not a murderer. If somebody’s just jumped into the water so that you rescue them and you’re on a jet ski, you’re not a murderer, you do not have the facility to pick them up in the first instance.”

The backlash was instant. Gary Lineker tweeted: “Find it hard to imagine how anyone could show such an extraordinary lack of empathy for our fellow human beings. Vile.”

Others pointed out that the controversy reflected poorly on Jeremy Vine’s show. Just last week, contributor Mike Parry sparked thousands of complaints after saying “minorities have to be squashed” on air.