Under Home Office plans, officials would be legally protected if a refugee they "push back" dies in the Channel. 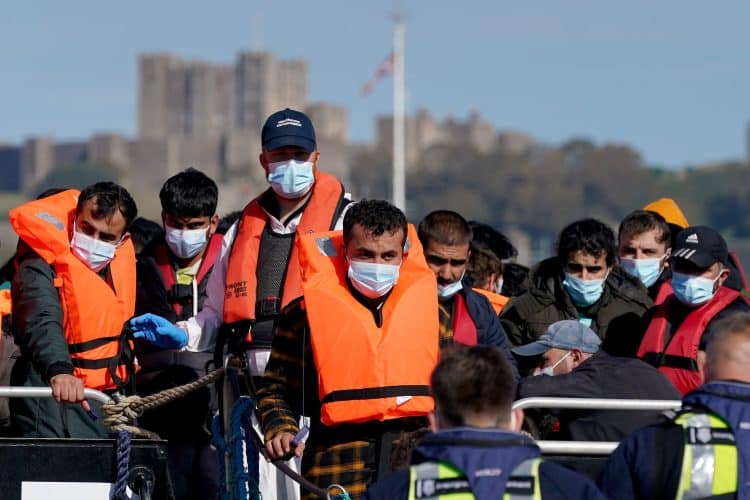 Border Force staff who follow Priti Patel’s plans to “push back” migrant boats in the Channel could be handed immunity from conviction if a refugee dies, reports suggest.

The bill, which is at committee stage, states its intention as making the asylum system fairer, deterring illegal entry to the UK and removing those with no right to be in the country.

It means anyone arriving in the UK via an illegal route – such as in a small boat across the Channel – could have their claim ruled inadmissible and receive a jail sentence of up to four years with no recourse to public funds.

The Home Office revealed last month that it was training Border Force guards to push back small boats.

Schedule 4A, part A1, paragraph J1 of the bill seems to be an effort to give officers immunity from conviction. It states: “A relevant officer is not liable in any criminal or civil proceedings for anything done in the purported performance of functions under this part of this schedule if the court is satisfied that (a) the act was done in good faith, and (b) there were reasonable grounds for doing it.”

Immigration barrister Colin Yeo told The Guardian that the provision was not guaranteed to protect officers from prosecution under either maritime or domestic laws.

“There are two qualifiers in the provision and it is hard to see how it could be reasonable to leave someone to either drown at sea or in a small boat which doesn’t have enough fuel to reach land,” he said.

Home Office sources told the newspaper that they were seeking to protect Border Force guards from prosecution.

A Home Office spokesperson said: “As part of our ongoing response to these dangerous crossings, we continue to evaluate and test a range of safe and legal options for stopping small boats.

“All operational procedures used at sea comply and are delivered in accordance with domestic and international law.

“We will fix the broken asylum system through our new plan for immigration, break the business model of people smugglers who put lives at risk and welcome people through safe and legal route.”