The Government have told people not to panic, but are they listening? 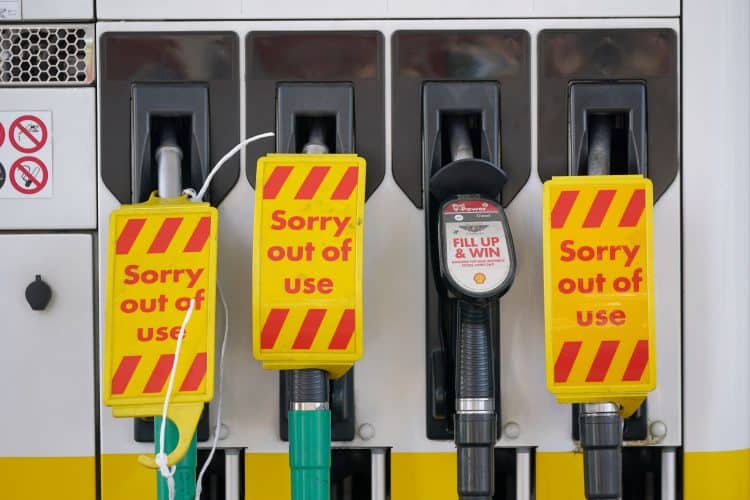 Plans to offer 5,000 three-month visas for foreign lorry drivers are “insufficient” to address supply issues in the lead up to Christmas, according to business groups. The queues at petrol station forecourts up and down the county have now boiled over as a violent confrontation took place at one petrol station.

UK drivers have been told not to panic buy petrol as there is plenty at the source – and any shortages are down to driver delays.

But pictures have shown chaos at pumps across the nation on Saturday – with some people even using jerry cans to stockpile.

In response the Government has announced a temporary visa scheme that will see 5,000 HGV drivers and 5,500 poultry workers allowed to take up employment in the UK until Christmas Eve, in a bid to keep supermarket shelves stocked with turkeys and tackle delivery difficulties at petrol stations.

The intervention came amid scenes of lengthy queues at petrol stations after a shortage of fuel tanker drivers forced some retailers to shut their pumps and ration sales.

But the British Retail Consortium and the British Chamber of Commerce criticised the scope of the package of measures revealed by Transport Secretary Grant Shapps on Saturday, which were seen by some as a step back from the Prime Minister’s ambitions to create a high-wage, high-skilled post-Brexit economy.

Mr Shapps said the changes, with short-term visas available from next month, would “ensure preparations remain on track” for the festive season.

Chamber president Baroness McGregor-Smith, however, said consumers and businesses faced “another less than happy Christmas” due to the visa offer being “insufficient”.

A fight broke out between a group of men at petrol station on Saturday, as tempers flared on some UK forecourts over fuel shortage concerns.

The brawl, reportedly between two families, took place at an Esso station in Chichester, West Sussex.

In a video of the fight recorded by onlookers, four men can be seen yelling at each other before a punch is thrown.

The altercation lasts for nearly a minute.

The exact reason for the fight is not known.

Related: Reactions to the ‘not a fuel shortage’ petrol panic and drafting in HGV drivers from abroad