One of the dogs can then be seen running off with the lifeless fox as members of the hunt on a quad bike and horseback follow it into the bushes. 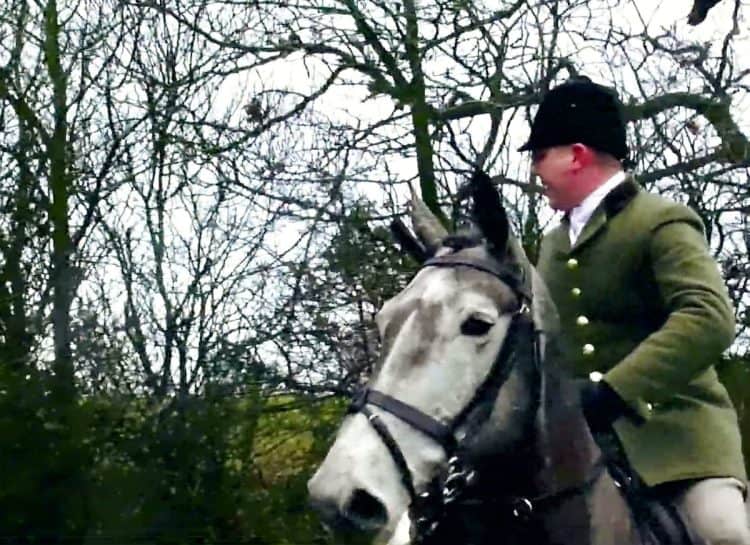 Harrowing footage shows the moment a fox appears to be savaged to death by a pack of crazed hounds – just two days after a deer was killed by dogs from the same hunt.

Animal activists captured the gruesome scenes while following members of the Warwickshire Hunt in Napton on the Hill, Warks., on Thursday (30/12).

The shocking video shows four hunt hounds in the middle of a field viciously tearing chunks of flesh from the animal’s bloodied body as they swarm around it.

One of the dogs can then be seen running off with the lifeless fox as members of the hunt on a quad bike and horseback follow it into the bushes.

The disturbing footage was filmed two days after hounds from the same hunt where caught on camera killing a small deer in Preston on Stour, near Stratford-upon-Avon.

A spokesperson for West Midlands Hunt Saboteurs said “We filmed the same hounds killing a deer two days before this latest kill.

“In response to that incident the Warwickshire Hunt claimed that ‘incidents of this nature involving hounds are incredibly rare’.

“So rare that this is the second kill this week and the fourth we have filmed since September.

“These incidents are happening far too frequently. The Warwickshire Hunt and their hounds are out of control.

“Any responsible dog owner would keep their dogs on a lead if they knew their dogs may attack other animals. These hounds should not be let loose in the countryside.

“We question the motives of a foxhunt who have deliberately chosen to employ a huntsman who has previously been convicted under the Hunting Act.

“A huntsman who repeatedly takes the hounds to places he knows he will find foxes.

“One hunt member informed us that it was a children’s meet, there were certainly a lot of children present and at least one child was present in the same field as the kill and would have seen the fox’s body being ragged about by the hounds.

“We have always maintained that a foxhunt is no place for children and this incident raises some very serious child safeguarding issues.

“Who knows what psychological damage has been done to those children who were present.”

Related: Watch: Pack of dogs chase deer and tear it to pieces during Boxing Day hunt