"Every time I see him it breaks my heart. He has no quality of life, he just exists." 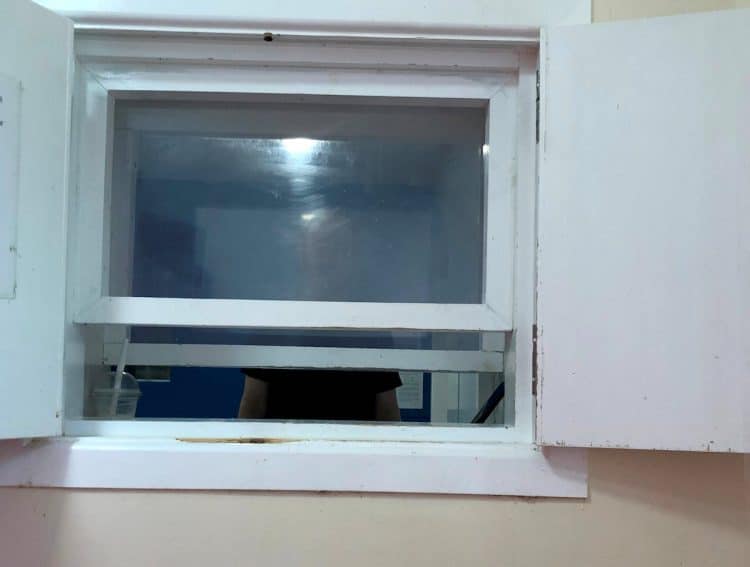 A young man with autism has been detained behind a hatch for more than four years in a mental health hospital’s old file room.

Patient A, 24, lives in a tiny room at the Cheadle Cheadle Royal Hospital in Greater Manchester, part of the Priory group.

His movements are constantly tracked by CCTV cameras, he has no physical contact with anybody and his meals are slid through a gap in the bottom of a wooden hatch.

Patient A, who also has a learning disability and Tourette’s syndrome, has been detained under the Mental Health Act since September 2017.

The space used to be an old file room at the back of the hospital.

It has a bedroom, a bathroom and a small lounge area, plus a “snug” or sensory room, where Patient A often sleeps, under the eye of a CCTV camera.

He is looked after by staff at a ratio of five to one and when his room needs cleaning he is shut in a separate area, such as an area of garden, closed off by high metal fencing.

His mum Nicola Cassidy, 49, says “people wouldn’t treat an animal” like they do her son and his care is “worse than being in prison”.

Nicola, from Liverpool, is preparing to launch a legal battle in the Court of Protection to have him released from his “life in a box”.

She wants a judge to review his sectioning under the Mental Health Act and provide a route to a proper home in the community.

She said: “We fully appreciate that my son has complex needs but he’s being treated terribly.

“He’s locked away from the world and has no physical contact with anyone. For his meals to be pushed through a tiny gap in the bottom of the hatch is awful.

“People wouldn’t treat an animal that way and I feel that his care is worse than being in prison.

“He has challenges but is a loving and caring person who needs stimulation and support.

“He is getting nothing at present. I can’t even hold his hand or hug him because of the conditions he’s kept in.”

She says with the right support that will help her son to flourish and spend more time with his family.

She added: “Every time I see him it breaks my heart. He has no quality of life, he just exists.

“I’ve been told by some of those involved in my son’s care that things aren’t working and Patient A could, with the right support, be cared for in the community.

“It’s difficult not to think that the longer he’s left, the worse his condition will become, until the point where he’s unable to be released.

“This isn’t about money. He has five carers assigned to him all the time.

“That level of staffing is costly and is probably a waste of money given that he has no contact with anyone.

“We keep asking for more to be done to support my son but nothing seems to happen. We’ve been left with no choice other than to take this action.

“All I want is what any mum would want and that is the best for their son so he can try and make the most of his life.”

Nicola says her son had a typical childhood up until around the age of 12.

He was diagnosed as autistic aged seven, then later with Tourette’s and a learning disability.

It was around the age of 14 that his family started to struggle with managing the changes in his mental state and Patient A hit crisis point.

He left his family home to go into residential care aged 14 in 2012 and was moved from placement to placement.

He was admitted to Mersey Lodge ward in Cheadle Royal Hospital on September 5, 2017, where he has stayed ever since.

Kirsty Stuart, an expert public law and human rights lawyer at Irwin Mitchell representing Patient A and Nicola, said: “This is yet another case where the loved ones of people with autism and/or a learning disability are detained in units which were not designed to care for people such as Patient A.

“The first-hand account we’ve heard from Nicola about what’s happening to her son is probably the worst I’ve heard.

“Understandably Patient A’s family are deeply concerned. We’re now investigating these concerns and how the legal process can help the family.

“We call on The Priory, the CCG and local authority to work with ourselves and Patient A’s family to reach an agreement over his care, which the family believe should be in the community as this would give him the best quality of life.”

A total of 2,040 people with learning disabilities and/or autism were in the hospitals at the end of August, according to NHS Digital figures.