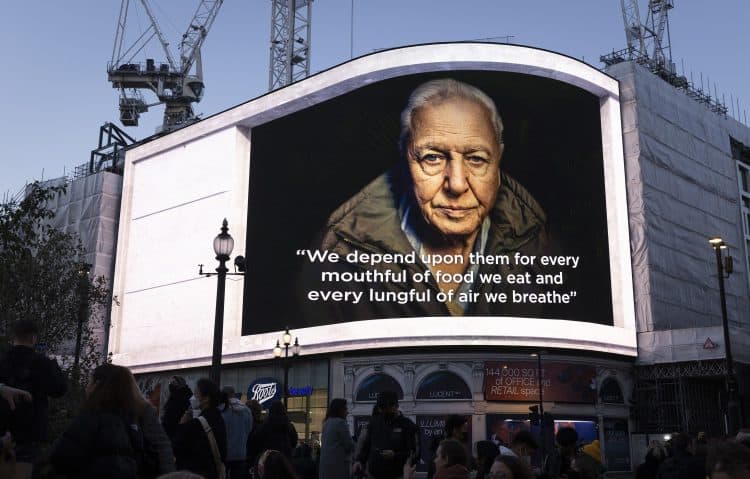 The face of Sir David Attenborough dominated Piccadilly Circus’s advertising screens for a special takeover as the veteran broadcaster alerted commuters about the importance of plants and their integral role in the survival of the planet.

The naturalist, 95, dominated Europe’s largest advertising display for 20 minutes on Thursday evening as he promoted a digital experience inspired by his latest documentary series The Green Planet.

Sir David said: “We must now work with plants, make the world a little greener, a little wilder. If we do this our future will be healthier, safer and in my experience, happier.”

After the announcement, a giant 3D animation showing a concrete backdrop slowly turned into an abundance of green foliage, eventually covering the entire screen.

In addition to Sir David’s announcement, the Shaftesbury Memorial Fountain, also known as the Fountain of Eros, in Piccadilly Circus was transformed into a plant installation, with flowers and foliage covering its steps.

The final episode of The Green Planet was broadcast on Sunday and saw Sir David exploring how plants manage to survive in London, despite the city’s inhospitable environment.

As an extension of the series, The Green Planet AR Experience will open on Regent Street on February 11.

The immersive experience will allow visitors to travel through a variety of digitally enhanced worlds, including Rainforest, Freshwater and Desert before finishing with an exploration of how humans are able to affect positive change.

Participants will be accompanied by a 3D hologram of Sir David as they learn how plants behave in the natural world, how they interact with animals and why they are vital for the future of the planet.

The Green Planet AR Experience will open at 55 Regent street and run until March 9.

Related: Watch: Boris Johnson tries to explain why he sat maskless next to Sir David Attenborough