Insider reporter Henry Dyer said Coyle had made Sinophobic comments in a bar on the parliamentary estate. 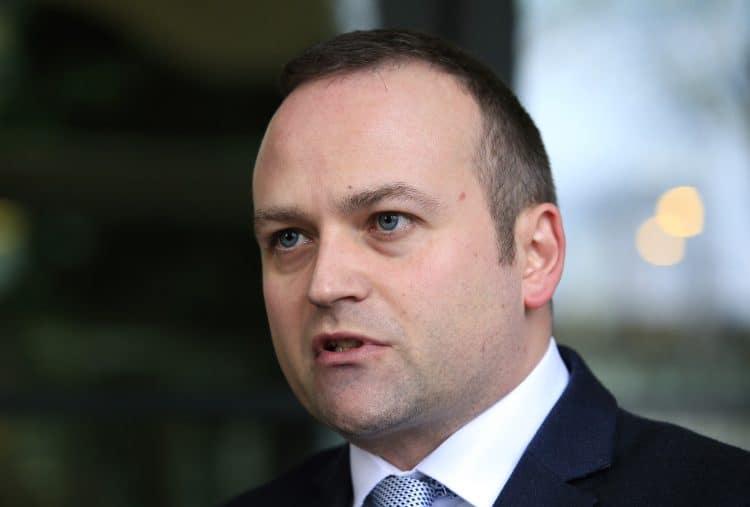 A Labour MP has been accused of making racist comments to a British-Chinese journalist in a House of Commons bar.

Neil Coyle, MP for Bermondsey and Old Southwark, has reportedly been banned from bars on the parliamentary estate after he was accused of making a Sinophobic remark towards Insider journalist Henry Dyer.

Dyer said the pair had been discussing Barry Gardiner, a Labour MP who received funds from a suspected Chinese spy, when Coyle said his colleague had been “paid by Fu Manchu” – a cartoon villain based on Chinese stereotypes.

The journalist said he suggested the reference was inappropriate, and noted that he is British-Chinese.

He said the MP told him his heritage was obvious “from how you look like you’ve been giving renminbi to Barry Gardiner”.

As he left the bar, Dyer said he wanted to defuse the tension by waving goodbye – but Coyle responded by sticking two fingers up at him.

The incident is said to have taken place on Tuesday 1 February – Chinese New Year.

Labour said on Friday morning that the party had removed the whip from Coyle. A spokesperson said: “The Labour Party expects the highest standards of behaviour from all our MPs and we take allegations of this sort very seriously.

“Accordingly the Chief Whip has now suspended the Labour whip from Neil Coyle pending an investigation.”

Dyer, writing on Thursday night, said the remarks left him feeling “uncomfortable” – and said he had reported the incident to the Speaker of the House of Commons.

He said: “On Tuesday, February 1, I went for a Chinese New Year dinner with my family then returned to Parliament for work, before going to Strangers’ Bar.

“I had been at Strangers’ the previous evening and witnessed Neil Coyle, a Labour MP, angrily shouting at a Labour staffer I know personally, silencing the bar. This led to reports on Twitter that evening and later in the Mail on Sunday.

“On Tuesday evening, I spoke to other journalists at Strangers’. Coyle approached the small group I was in. He did not acknowledge my presence at the incident the previous evening, and spoke on several topics, including his claim that his constituency has the most restaurants with Michelin stars.

“The topic eventually moved to Barry Gardiner, the Labour MP who had received funding from a suspected Chinese spy. Coyle made a remark suggesting Gardiner was being paid by “Fu Manchu”, a comment that struck me at the time as not right, given it had been well reported who had been giving Gardiner money, and so there was no need to refer to a 20th Century trope of a Chinese supervillain.”

He added: “I gently pushed back at Coyle about this. He asked me if it was just the case that I was being over-sensitive, before saying that he would apologise if he had said something bad and it wasn’t just me being sensitive, which I believe was insincere. He then said that he had relatives of Chinese descent.

“I responded by saying that I am British-Chinese, to which Coyle responded that he could tell, “from how you look like you’ve been giving renminbi [the Chinese currency] to Barry Gardiner.”

“He then left our group. The two other journalists in the group ask me what he had just said, perhaps having not heard clearly, and I repeat Coyle’s remark to them.

“Later that evening, as a group of us were leaving the bar, others turned and waved goodbye to other journalists. I also turned, and saw Coyle. Keen to defuse the tension from earlier, I waved goodbye to him, to which he responded by putting two fingers up at me.

“I told friends that evening that someone had made Sinophobic remarks to me. But it was not until the following day that I fully realised his remarks were not just inappropriate but made me feel uncomfortable.

“The next day, I encountered Coyle twice on the Parliamentary estate including on Wednesday evening when we were both in separate groups at Strangers’. He made no acknowledgement or recognition of me. I felt uncomfortable seeing him both times.

“On Thursday morning, I informed the Speaker of the House of Commons what had happened. The Speaker and his staff took immediate action, in conjunction with the Serjeant at Arms and the House of Lords’ authorities, to suspend Coyle from the bars on the Parliamentary estate pending an investigation by the Labour Whips office into the incidents on Monday and Tuesday evening.”