There were ugly scenes on the streets of Dalston this weekend, after an alleged 'immigration raid' was thwarted by protesters 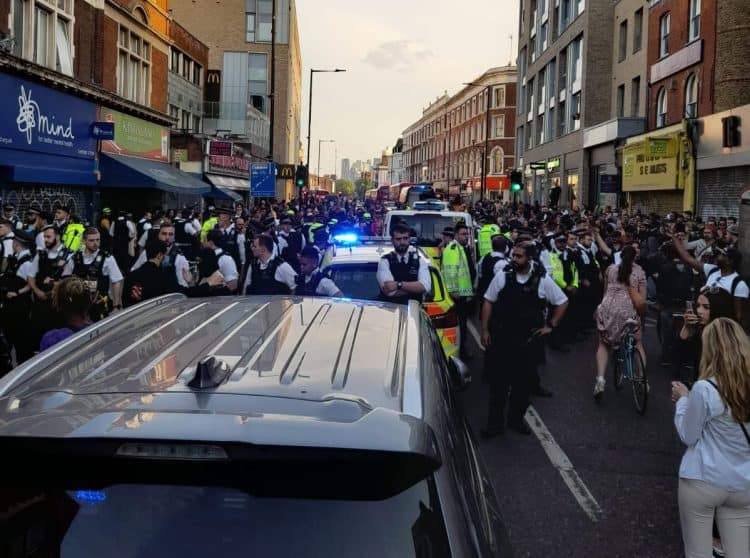 The community of Dalston in Hackney rallied together on Saturday, as scores of protesters prevented the authorities from carrying out the arrest of suspects wanted for immigration-related offences. However, some demonstrators say they fell victim to ‘police brutality’.

Shocking footage has emerged from the scene, where several delivery drivers had been targeted in the alleged raid. Hackney Police claim they were suspects wanted for ‘e-scooter and moped-related crimes’ – but a leading courier union disputes this completely.

IWGB Couriers state that this was a planned immigration raid, that targeted delivery drivers specifically. They then called for members of the public to show their resistance to the operation, and sure enough, dozens of demonstrators turned up.

It’s understood that two ‘suspects’ were able to escape from the police, while a third detainee was eventually let go ‘as a result of the public protest’. Sadly, this process didn’t happen peacefully, and there were plenty of heavy-handed scuffles caught on film.

In a statement issued on Saturday evening, Hackney Police said that viral videos ‘rarely provide a full and accurate picture’, revealing that several officers were injured in the clashes – police vehicles also got damaged during the fracas.

“On Saturday, our officers were carrying out an operation that targeted e-scooter and moped crimes in Dalston. This led to the police detaining a man who showed up on the system as someone who had committed an immigration offence.

“As we went to arrest this man, a crowd gathered and they tried to stop the process. There were efforts on social media to summon more people, suggesting this was an immigration raid. Several more arrests were made for violent disorder.”

“We are aware of a number of videos that are circulating on social media as a result of this disorder. We urge people to remember that such videos rarely provide a full and accurate picture of what’s taking place.”