"It’s official- we are laughing stock around the world," said one embarrassed Twitter user. 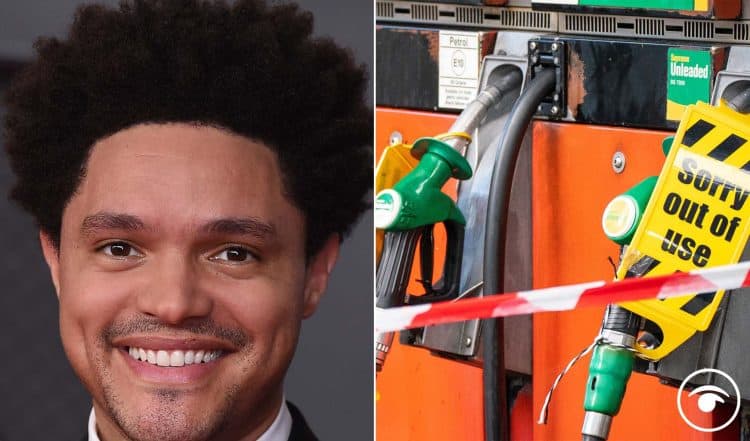 Trevor Noah has trolled the UK on Brexit causing fuel shortages across the country in a close to the bone but very funny clip on The Daily Show.

It comes as army tanker drivers are taking to the roads for the first time to deliver supplies to beleaguered petrol stations hit by the fuel crisis.

In the 59-second clip, Noah begins says: “So basically what happened, is the UK passed Brexit because they were all sick of the ‘dirty foreigners’ coming in and taking their jobs and now there’s a fuel crisis – partly because ‘dirty foreigners’ are the ones driving all the dirty gasoline trucks.

“Which really shows you how everyone hates the idea of immigrants way more than the actual immigrants or what the immigrants do.”

The host then put on his best cockney accent to mimic a Brexiteer.

[UK accent] ‘THE IMMIGRANTS ARE TAKING OUR JOBS.’

‘Okay, all the immigrants are gone… do you want the jobs now?’”

British Noah replies: “‘Well, I mean not me personally no, but I’m sure Nigel will love that, wouldn’t you? No? Well not Nigel either. But I mean I’m sure they’ll be somebody that wants the job. What about Oliver? What do you mean he’s in America? Doing what? A TV show? They understand him? About News? Why would anyone do that? So he doesn’t want the job either?’”

Related: Tory MP says it could be ‘great opportunity’ if supermarket supply chains were to break