Watch: Claims that only William and Kate stayed to meet public have been called out

The duke and duchess held hands as they looked at the tributes, with Harry at one point affectionately putting his hand on Meghan’s back. 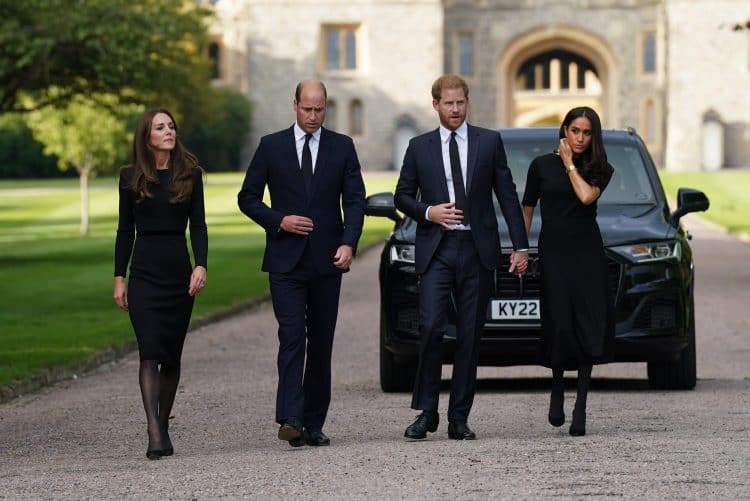 The Prince and Princess of Wales have been joined by the Duke and Duchess of Sussex on a walkabout at Windsor Castle as their first engagement under their new titles.

Harry and Meghan joined William and Kate in public together for the first time since Commonwealth Day on March 9 2020, as they inspected flowers and balloons before a walkabout at the venue on Saturday.

A royal source said the new Prince of Wales asked his brother and his wife to join them in viewing the tributes.

The source said: “The Prince of Wales invited the Duke and Duchess to join him and the Princes of Wales earlier.”

The last time William was joined in public by his brother at Windsor Castle was at the funeral of the Duke of Edinburgh in April last year.

The couples were dressed all in black as they walked along the gates of the castle.

The duke and duchess held hands as they looked at the tributes, with Harry at one point affectionately putting his hand on Meghan’s back.

However, a since-deleted tweet, from the Mail’s Royal Editor claimed that ‘only William and Kate stayed to meet the public.’

Perhaps she saw it differently and didn’t see Harry and Meghan, we cant be sure.

This young person talked about the hug she got from Meghan.

Related: Queen’s death: The Mail have attacked Meghan and nobody is surprised