Watch: Boris Johnson pays tribute to ‘Elizabeth the Great’ – not everyone is gushing about it though

In a Commons chamber filled with MPs clothed in black, Mr Johnson described the Queen as ‘the keystone in the vast arch of the British state’. 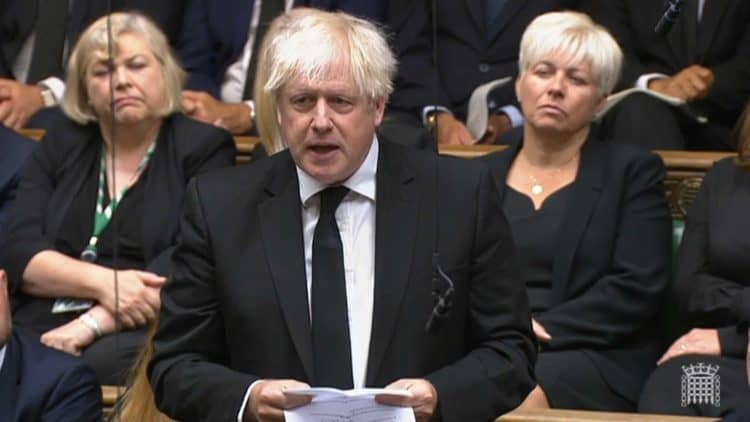 Boris Johnson has said the Queen was “as radiant and as knowledgeable and as fascinated by politics as ever” in their last meeting before his resignation as prime minister.

Praising the late monarch as “Elizabeth the Great”, Mr Johnson also revealed that he recently “choked up” when he was asked to make a pre-recorded tribute to the Queen by the BBC.

He revealed that the BBC had visited him “a few months ago” to speak about the Queen, and it was “requested that I should talk about her in the past tense”.

Mr Johnson said: “I am afraid I simply choked up and I couldn’t go on. I am really not easily moved to tears, but I was so overcome with sadness that I had to ask them to go away.

“She said then: ‘We know, every one of us, that in the end all will be well’. She was right, and she was right again, in the darkest days of the Covid pandemic, when she came on our screens to tell us that we would meet again. And we did.”

Here are some of the clips:

A lot of people thought his speech was great, Jon Sopel for one:

But others remembered what he said in a different way: