The Mustang name conjures images of Steve McQueen and a howling V8. How does the Ford Mustang Mach E carve its own path for the famous name? 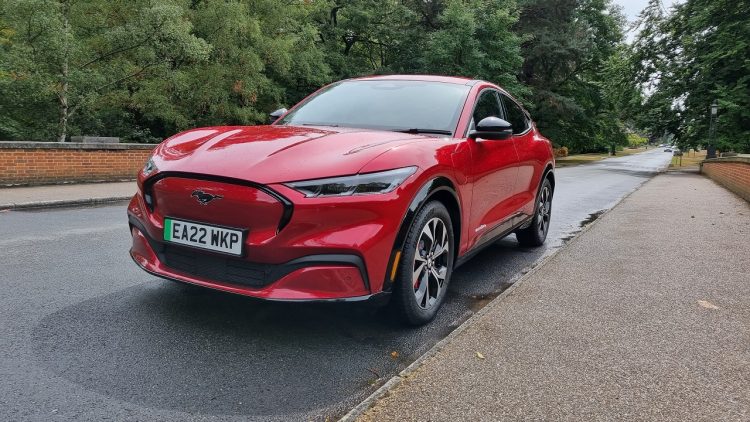 We’re realising a sea change in the automotive market. Batteries are here to stay and manufacturers are reimagining themselves and, in some cases, their old branding. We recently reviewed the BMW i4 M50, M Sport’s first EV. Before them, however, Ford had called upon the most illustrious name in its storied history and presented us with the Ford Mustang Mach E. The times they are indeed a-changing. Can the Mustang nomenclature work on an EV? To add further grist to the mill of the naysayers, it’s also an SUV. Is nothing sacred anymore?!

You would think, however, that if anything was up to the task of being blindingly fast and theatrical in a straight line, whilst being mildly terrifying in a bend, the Mustang was it. The great models of yesteryear provided that in spades. And for those who hold sacred the Mustang brand, it’s worth remembering that Ford produced one or two listless versions of their classic through the 90s and early 00s. The sands of time stand still for no car; commercial imperatives ahoy, this is the 2020s reimagining.

First things first – and this is hugely significant – Ford has nailed the aesthetics of the Mustang Mach E. It would have been a non-starter had this been another bland crossover/SUV type affair. The Mustang Mach E fits its time and space perfectly, something it does share with its predecessors. Aside from electrification, the car market has leaned significantly towards SUVs. Give the people what they want, it worked in the 60s as well as it works now.

Would it be prudent, however, to judge a book by its cover? Let’s find out…

First impressions are good with the Ford Mustang Mach E. Once you get past the exterior looks and head into the cabin, you find a well appointed and well put together interior. The seats are comfortable, there’s loads of space and it’s a relaxing environment.

The centre screen dominates. Similarly to Tesla, everything is operated through here, so it pays to get used to its functionality. At first it comes across as a bit overbearing, but like anything, spend a bit of time with it and it becomes second nature.

Storage is plentiful, too. Being built upon a bespoke EV platform, there are loads of nooks and crannies up front, complimented by a 502ltr boot with more storage in the front. You’re unlikely to want for more capacity.

The Ford Mustang Mach E is an incredibly easy car to use, too. Jump in, select D from the rotary drive selector and away you go. One point to note is the tech pack. It wasn’t fitted to the model tested here, but brings in a plethora of creature comforts: 360-degree parking camera, B&O stereo, full panoramic roof, advanced park assist and hands free tailgate. Imagine living in 2022 and having to open and close a boot yourself? That should be a standard feature on a £60k+ car, but the other options the tech pack bring besides make it an option worth ticking.

On the sound system, the standard offering is also very good. The Ford Mustang Mach E cleverly uses the strip across the dashboard as a speaker, which works really well.

What’s the Ford Mustang Mach E like to drive?

If you’re expecting a 1960s knees-up, you’re going to be disappointed. The two-ton weigh and sheer size of the Ford Mustang Mach E render that an impossibility. So, Ford has approached things from a different angle.

The AWD standard range model tested here produces 296hp and 580Nm of torque. This propels the Ford Mustang Mach E from standstill to 60mph in a thoroughly respectable 6.3secs. The AWD model is fitted with 19” wheels (18” and 20” are available at the other spec levels) and it does a good job of ironing out the kinks in our UK roads.

At higher speeds, it’s a very refined ride indeed. At lower speeds, it can be a bit fussy over speedbumps and potholes, with the car wallowing over humps and crashing through lumps.

Out on the open road you have three drive modes: whisper, active and untamed. One complaint is that you have to dive into the big screen to change between them. The difference in throttle response is marked. In untamed, the Ford Mustang Mach E surges forward with real intent, whereas in whisper it’s far more polite. For a quick overtake, having instant access to these options would be useful. The throttle response is too sharp for use around town in untamed, for example, but you want it’s hit on an open road.

On an open road, the Ford Mustang Mach E is a surprising beast. Whilst it’s AWD, the rear end is actually quite playful, always willing to slip round. The steering, too, is sharp and accurate and creates an enjoyable experience.

The range is also excellent. I achieved 3.7miles/kWh from 250-miles of driving, equating to a 259-mile range from the 70kWh battery. That included the spells of ‘untamed’ driving, too.

The automotive market is changing and the reimagining of old classics is inevitable. The Ford Mustang Mach E does a great job of bringing the Mustang brand into this new world, even if, perhaps, it didn’t need to. If you’re looking for a Mustang with the original spirit of a wild V8, the Mustang Mach One is still available. Whilst that represents the past, the Mach E very much represents the future, whether you like it or not.

The Ford Mustang Mach E is a car that grows on you the more time you spend with it. It’s well appointed, looks great and you get used to navigating to the functionality via the central touchscreen.

One sticking point, however, is the price. The model tested, resplendent in the fabulous Rapid Red paintwork at £1,150, comes in at £61,230. There’s no getting away from it, that’s a lot of money. You’ll need to find more for a hands-free boot, too.

The way we obtain cars, however, has also changed. Virtually no one walks into the dealership, plonks £60k on the table and drives off. It’s all on monthly payments these days. So, if you really want a Ford Mustang Mach E, paying a bit extra each month isn’t going to be a stumbling block.

If you really want a Ford Mustang Mach E, too, it won’t disappoint. Great looks combined with a surprisingly good driving experience and accurate real-world range provide plenty of appeal in an increasingly congested market place.

Whilst it doesn’t quite live up to the Mustang name of yesteryear, in fairness, there’s little sense that it’s trying to. The world is changing, and with it so must even the Mustang. The Mustang’s new path looks set to be a promising one.