"The transport Secretary’s defence of Boris Johnson this morning was utterly shameless." 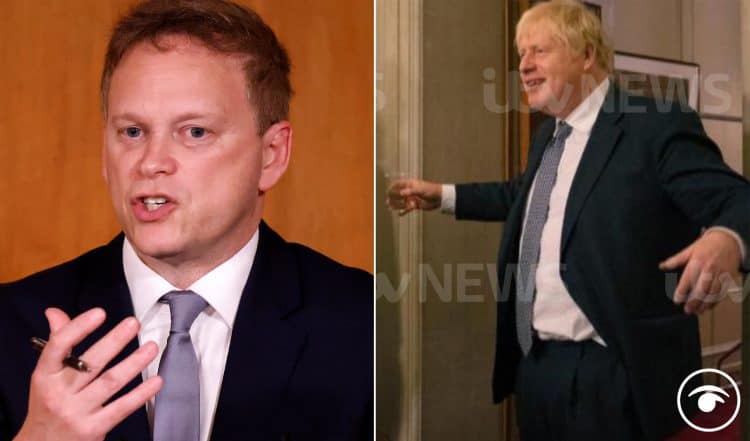 Boris Johnson does not believe he was at a lockdown-breaking party in the images showing him raising a glass and surrounded by colleagues and wine bottles, a Grant Shapps has said.

But a new viral video by Peter Stefanovic has dismantled the PM’s claims and Shapps’ defence of Johnson’s attendance at illegal gatherings.

Grant Shapps said on Tuesday he was “angry” to see the photographs but suggested the Prime Minister may not have been fined over the event because he left the leaving do “pretty quick”.

The Transport Secretary argued that Mr Johnson had only “popped down” to toast departing communications chief Lee Cain on November 13 2020.

Mr Shapps pointed to Mr Johnson’s red ministerial box being present in the images as he claimed to Sky News the Prime Minister was “clearly not” partying.

“It looks to me like he goes down on his way out of the office and thanks the staff and raises a glass, and doesn’t in his mind recognise it as a party,” Mr Shapps said.

Peter Stefanovic has comprehensively discredited the PM and the lines from the Grant Shapps to defend his behaviour.

He tweeted the video and wrote: “The transport Secretary’s defence of Boris Johnson this morning was utterly shameless.The evidence that the Prime Minister lied to Parliament is now overwhelming The Ministerial code is clear – HE MUST RESIGN”

Related: Reaction as Shapps says ‘not partying’ PM ‘lost his mum’ but she died year later