"I've missed shopping so much during lockdown, so I was always going to try and make a day of it once the stores were allowed to reopen." 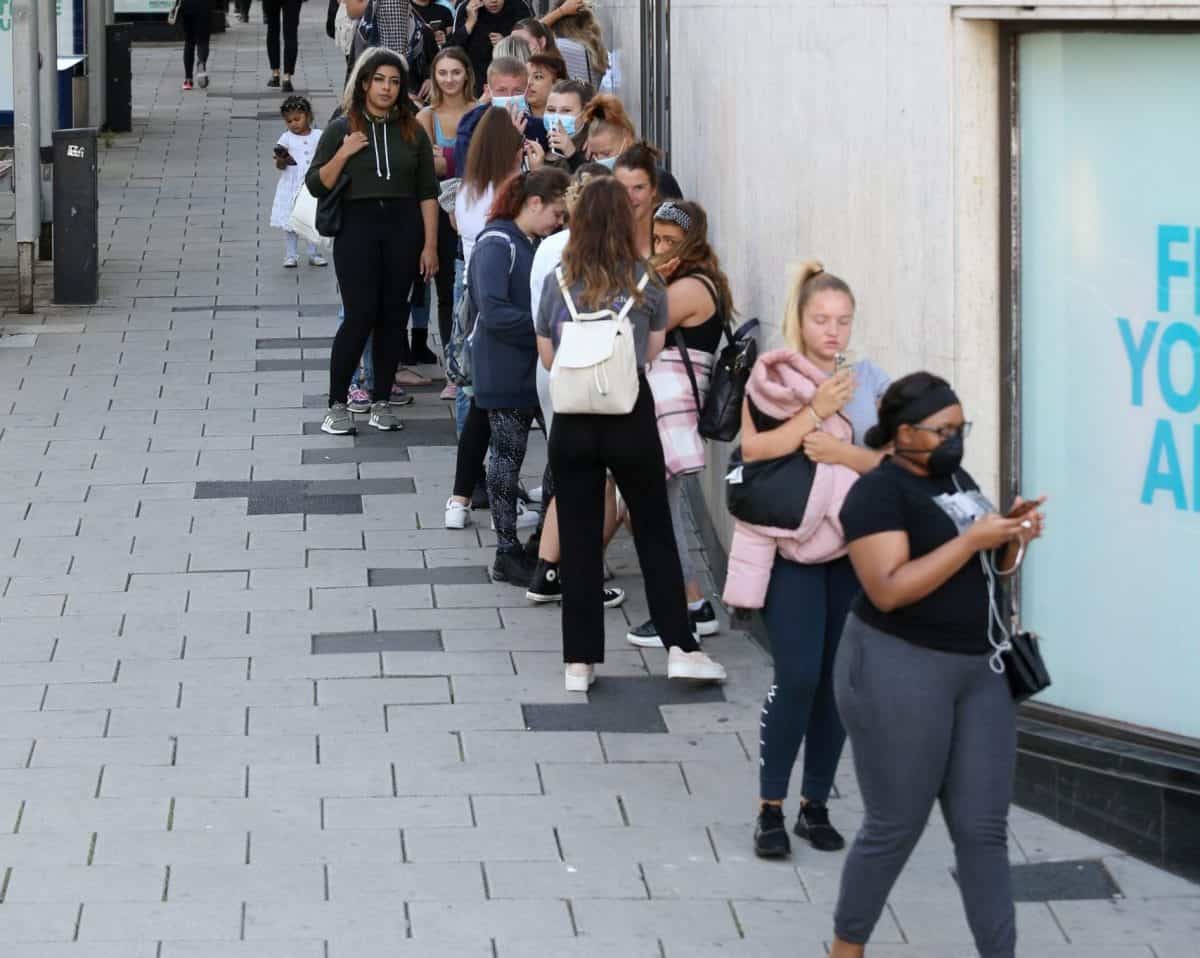 Shoppers queue outside Primark in Bristol on the first day that non essential shops are allowed to opening following coronavirus restrictions, June 15 2020. Credit;SWNS

Eager shoppers queued outside the world’s biggest Primark in Birmingham OVERNIGHT as it reopened its doors following lockdown.

The budget fashion retail giant was even forced to open early to cope with demand after massive queues of people formed outside the store from the early hours.

Some excited shoppers said they had been there since 4am this morning (Mon) to be first in line to snap up a bargain following three months of coronavirus lockdown.

At least 20 people were gathered outside by 6am – with the flagship 161,000 sq ft store opening at 7.25am to accommodate the thousands expected to flock there today.

Sachin Sadh, 33, from Small Heath, Birmingham, was near the front of queue having got there at 5.30am – two-and-a-half hours before the store was due to open.

He said: “There were already quite a few people here, I couldn’t believe it. I thought I’d be right at the front of the queue for sure.

“But the scenes have been pretty calm in comparison to the chaos I expected. Everybody has been sensible so far and are maintaining their distance.

“I’ve set myself a budget of £300. I need to buy the wife something for her birthday, so I’m going to have a look around a few places as you can’t beat Brum for shopping.

“It’s really odd seeing lots of shoppers and staff in face masks and PPE, you can tell we’re not back to normal yet but we’re getting there.”

Kerry Jenkins, 27, had travelled 40 miles from Worcester, to get in line from 7am. She said: “I was up at 4am and got here as early as I could.

“I’ve missed shopping so much during lockdown, so I was always going to try and make a day of it once the stores were allowed to reopen.

“I’m just after a few summer clothes, nothing too fancy. It’s not like we’ll have much of a holiday this year, but shopping is the next best thing for me.

“They are saying to expect lots of discounts as there’s so much stock that needs shifting so I’m hopeful of finding a few bargains today.”

Mum-of-one Terri Hughes, 31, from Tamworth, Staffs., said: “I’ve just come into Birmingham as its the best place around here for shopping and their Primark is great.

“It was all very British and orderly in there. You can see a bit of a scramble for clothes usually in Primark, but that wasn’t the case today.

“It’s still a bit eerie in a way, seeing everyone in face masks – but at least you can tell we’re over the worst of it. We just need the pubs to reopen now.”

Primark is once again welcoming customers at 153 stores after the government gave the go-ahead for non-essential businesses to re-open.

Extra safety measures have been put in place by the discount retailer – including additional security, restricted numbers of people allowed in store and staff having to wear PPE behind screens.

Only every other till will be open and there will be hand sanitiser stations dotted around the store for shoppers to use.

There were similar scenes at other Primark stores across the Midlands, with large queues snaking through the streets of Wolverhampton, Hereford and Nottingham.

Primark’s CEO, Paul Marchant, said: “We have really missed our customers and we are delighted to be back on 15 June and able to provide them with the quality, affordable products they love from Primark.

“While it might take a little longer to get into store, once inside, customers will find all their favourite Primark products and plenty of choice as usual.

“We have worked hard to make sure that clear signage and extra help will be there to guide them through the changes we have made to allow for social distancing.

“We are also asking customers to respect the measures we have put in place to help ensure shopping at Primark is an enjoyable, safe experience for everyone.”