"It seems a very brutal thing to do to the badgers, with some of them likely already pregnant." 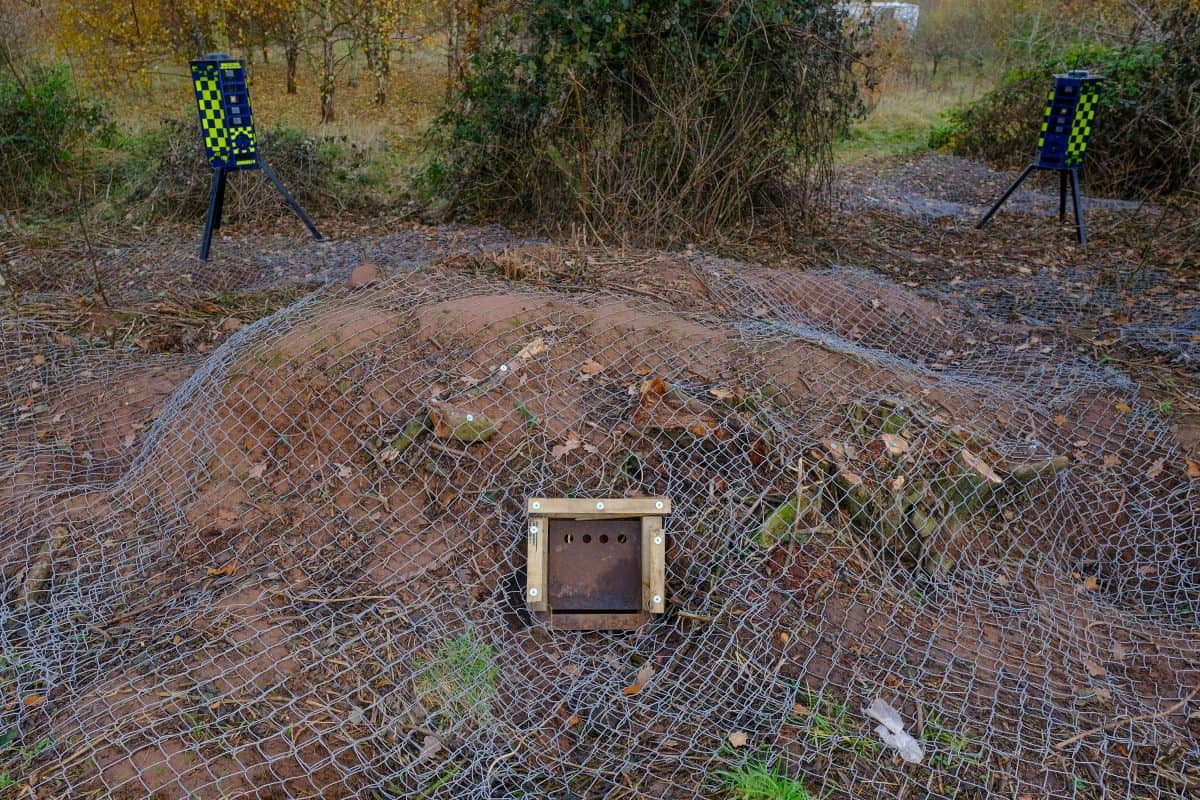 This shocking video shows a century-old badger sett covered in netting and guarded by ‘Darlek-like’ machines to deter the animals returning so their land can be built on.

The woodland area marked out as part of the controversial £90bn high-speed railway linking London, the Midlands and the North has been home to badgers for at least a century.

However the animals are being forced out, with no alternative sett to move to.

With breeding season fast approaching for the badgers, and some already pregnant, the animals are facing being forced to trudge for miles, and potentially cross dangerous roads, to find uninhabited land to make a new home.

And as if the forced eviction isn’t distressing enough for the creatures, HS2 have set up startling machines around the netting which emit a bright light and a loud warning when people or other animals go near the net.

Under Natural England licencing regulations, an application can be made to exclude or evict badgers from setts, or destroy setts, provided an alternative, artificial sett is created nearby.

But Stop HS2 campaigners at the Crackley Woods camp near Kenilworth, Warks., claim they have seen no evidence of a new sett being created for the badgers.

And one campaigner has suggested that the HS2 workers have broken Natural England regulations above ground in order to lay the netting over the badger sett.

Indra Donfrancesco, 51, who has been based at the Crackley Woods camp for the last eight months, said: “They are licenced to cover a badger sett up, but they are not supposed to do any work above ground.

“Under Natural England licencing, you’re not supposed to do work within 30-50 metres of a live badger sett.

“Natural England have given special dispensation to HS2 to work within ten metres of setts along their 123-mile route.

“But I have caught them working just five metres away from this sett.

“They get around it by positioning their tree grabber ten metres away – but then extending the arm nearer, so they can fell tree branches just five metres from the sett.

“You can also see parts of the net that have been hammered in to tree stumps – which suggests they have broken the rules by felling trees on top of the sett.”

Environmental campaigner Indra added: “It is so upsetting. We’ve set up wildlife cameras near the sett to monitor the badgers, and this is a major sett.

“There’s little pathways everywhere that show where they’ve been coming and going.

“Badgers do roam, they can go traipsing for miles at night. It’s just totally wrong that they could come back to their home and not be able to get back in.”

And speaking about the “bizarre” machines – which the campaigners call ‘Daleks’ after the Doctor Who monsters – Indra said: “They’ve put them up right next to the sett – as if the net isn’t distressing enough.

“Even my dog sets them off. They let off this bright light and a really loud voice with a strong Northern Irish accent.

“It says, ‘Warning, your presence has been detected, the owners and operators have been alerted’.

“We’ve had to tell them to turn off the machines – but they keep turning them back on.”

He said: “Even if they are acting within the terms of their licence, it seems morally wrong to do this kind of thing at this time of year.

“It seems a very brutal thing to do to the badgers, with some of them likely already pregnant.

“Their deadline to lay the netting is November 30, after which badgers will be breeding and giving birth to their young, so they will not be allowed to.

“But they have had all summer to do it. I don’t know why they’re rushing it now.”

Kevin added: “Badgers are strongly territorial. They can’t just go to any old wood or field if there is another badger sett there.

“They now have to go and find uninhabited land to make a new sett. A lot of animals here have been turfed out of their ancestral home for winter.”

And he said: “Natural England are not all comfortable with this.

“HS2 have their own Act of Parliament, which gives them a whole lot of power over what they can do to wildlife.