The pop up was commissioned after new research found the average Brit sees red three times a week. 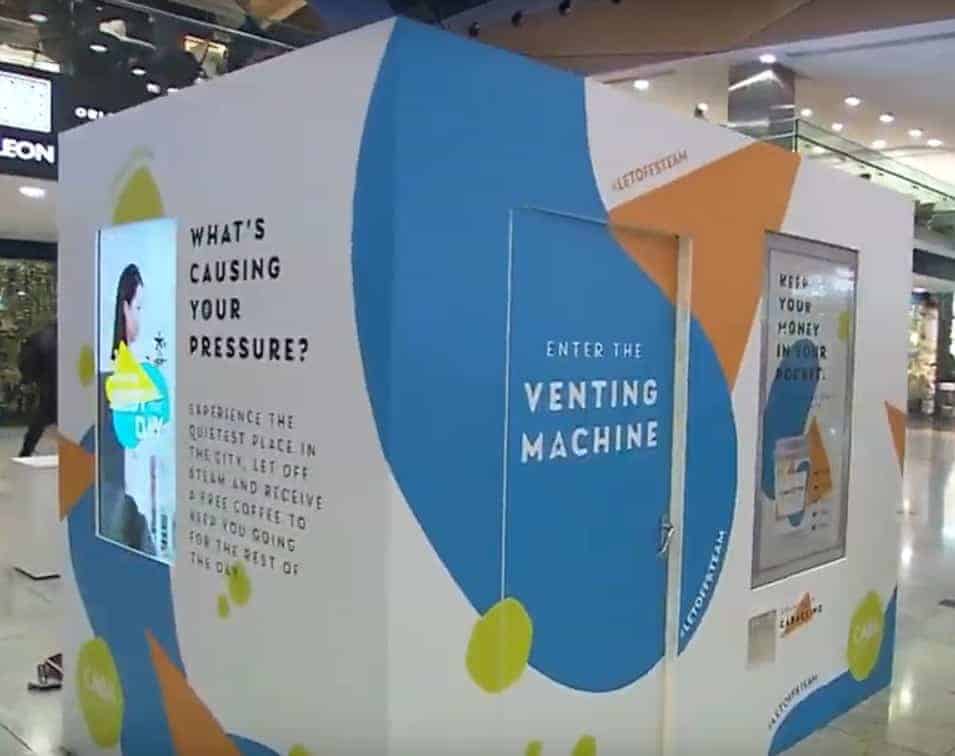 It emerged that jobs or workload were deemed the biggest cause of a build-up of pressure in modern life, followed by finances and being too self-critical.

The stats were revealed as part of CABA’s ‘Drop the pressure’ campaign, which aims to highlight and tackle levels of stress, primarily among millennial accountants.

Passers-by can pop down, have a vent and to learn how to reduce their pressure.

A video has captured stressed-out Brits voicing their frustrations and having a good old whinge and moan in the venting booth.

The study also found it’s not just the bigger problems causing Brits worry, as when the pressure gets too much, many can be tipped over the edge by tiny inconveniences.

A further one in five have ‘burst’ after a delay on public transport, and 36 per cent have snapped at someone being rude to them.

Other things that bring adults to boiling point include technology not working properly (26 per cent), having to keep repeating yourself to someone (25 per cent) and not getting enough sleep (37 per cent).

But rather than shouldering it themselves, 45 per cent reported their partner normally takes the brunt of their frustrations, with 14 per cent taking their stress out on friends.

And one in 10 will even be unkind to strangers or front-line customer service staff as a result of the worries they bear.

Despite the negative associations with stress and pressure, nearly one in three Brits reckon they work more productively when they have lots on and are working to demanding deadlines.

It also emerged that half of those polled, via OnePoll, felt like they deal with stress in a ‘healthy’ way through things like counting to 10, going for a walk or forcing a smile.

Nearly three in 10 think venting to someone helps keep levels of pressure tolerable, and 28 per cent believe it should be more accepted in society for people to let off steam and vent their feelings in public.

Richard Jenkins added: “Almost half of those surveyed felt like the reason they couldn’t cope was due to having so much on their mind.

“This is an issue facing all of society as we all have to juggle more demands on our time.

“However, It’s important to remember that success is not dependent on how busy you are.

“Individuals need to recognise building pressure and high-levels of stress and know how to recognise their personal limit and when to take action.

“The first step is to talk to someone before it gets too much, be it to a colleague, friend or family member or a trusted professional.”

1. Going for a walk
2. Laughing with someone
3. Listening to music
4. Having a cup of tea or coffee
5. Taking some time alone
6. Venting to someone
7. Taking a bath
8. Doing some exercise such as going for a run or playing sport
9. Reading a book
10. Playing with/spending time with a pet
11. Spending time with your partner / family
12. Seeing friends
13. Having a ‘treat’ such as a biscuit, cake or ice-cream
14. Watching a film
15. Singing to music
16. Drinking alcohol
17. Cleaning the house
18. Going out for dinner
19. Buying something new or going shopping
20. Screaming and shouting

Related: Stroking a cat or dog for just 10 minutes can significantly reduce stress