The Ministry of Defence said Russian casualties are ‘likely to be heavy and greater than anticipated’. 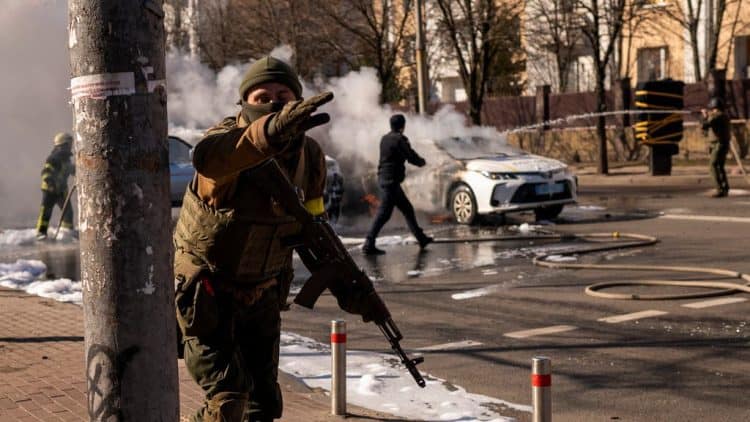 A Ukrainian living in Kyiv has said he is “less and less” scared as the country’s armed forces fight with Russian soldiers on the outskirts of the capital.

While seeking shelter in a basement, 35-year-old Mykhailo, who declined to share his surname, told the PA news agency he had previously fled Sevastopol, Crimea, in 2014 after Russia annexed the region.

The UK Ministry of Defence said on Saturday that the Ukrainian military had “put up (a) staunch resistance”, adding that Russian casualties are “likely to be heavy and greater than anticipated”.

Describing the prospect of further military action in coming days, Mykhailo, a software developer, said: “It’s going to intensify, no doubt about it. Nevertheless, I’m scared less and less.

“I do have clear instructions on what and how to do in case. Kyiv’s territorial defence forces, national guard, regular army, police, special forces are doing (a) great job. To sum up: we are prepared and ready.”

Mykhailo also raised concern that misinformation is being shared in social media groups in Ukraine, but added: “We know who to listen to.”

Natalya Gayda, a 44-year-old animation director who works in Kyiv but fled to the city of Ternopil, 70 miles east of Lviv, told PA she is “hopeful… Russia saw we are not going to fail silently”.

She also spoke of calls to exclude Russia from the Swift system for international banking transfers, saying: “I would like (the) people of Germany and Hungary (to tell) their government… to change their minds about disabling Russia from Swift.

“It’s not a time to think about wealth. We want peace, but if Russia succeeds, it would be horrible to the whole world.”

In a video released on Saturday, Ukrainian President Volodymyr Zelensky also called for Moscow to be kicked out of the Swift system, noting that Germany and Hungary should show “courage” and agree to the move.