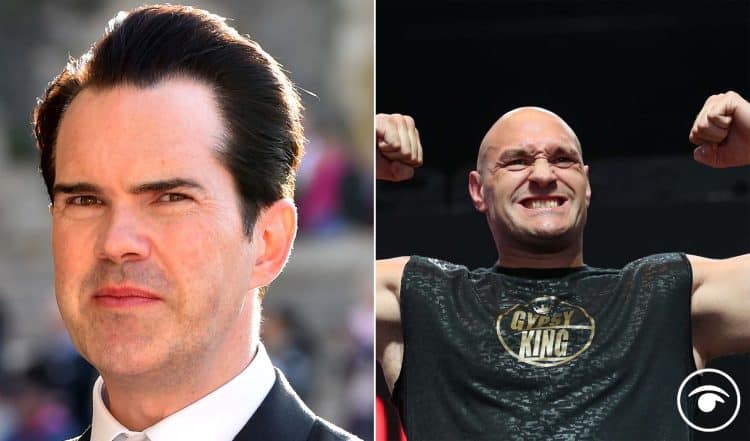 Jimmy Carr has ‘agreed to leave out jokes’ – including a widely-condemned Holocaust gag – when he performs his comedy show this week.

It comes world heavyweight champion boxer Tyson Fury said he would chin the comedian over his joke about gypsies dying in the holocaust.

The comedian is said to have promised that no material from the controversial Netflix show ‘His Dark Material’ will feature at his sold-out gig in Cambridge on Wednesday.

Carr, 49, is embroiled in a cancel culture row amid backlash to a joke about Nazis killing ‘gypsies’ during the Holocaust.

The gag was made in an hour-long show named ‘His Dark Material’, which is being streamed on Netflix, and has fuelled a debate over racism and free speech.

Now, Carr has apparently agreed not to use any material from that show when he performs at Cambridge Corn Exchange.

City councillors say they have been “assured” by Carr’s management team that jokes used in ‘His Dark Material’ will not feature.

Cllr Anna Smith said: “I share the outrage felt by so many in Cambridge and beyond, regarding these unacceptable remarks. Genocide is not a subject for mockery.

“As a council, we are committed to working with and supporting marginalized communities, including our Gypsy, Roma and Traveller communities.”

Cambridge City Council said that it will light up the outside of the venue in the colours of the Romani flag – red, green and blue – ahead of Carr’s show.

It also announced plans to hand out leaflets to punters about historic and current racism to Gypsy, Roma and Traveller people.

Anti-racism activists say they will protest outside the Cambridge venue on Wednesday evening.

Cambridge Stand Up To Racism wrote on Facebook: “We need to inform him [Carr] that his vile racist jokes are not welcome in Cambridge.

“Our GRT communities are being battered by our government and we can’t allow this further outrage to go by unmarked.”

The self-proclaimed Gypsy King boxer said if Carr was man enough to make offensive jokes, then he is “man enough to get punished for it” when asked his opinion on the current furore.

While Fury admitted that Carr needed to “pay the consequences”, he said it would be silly for him to be “kicked off TV” as a result.

“I don’t get involved with jumping on board a ship that is sinking. I’m not that type of man,” the heavyweight champion added.

“Carr probably has enough s**t going on in his life at the moment so he doesn’t need me, the Gypsy King, to jump aboard that boat.

“I believe in free speech in this country. Say what you want, but pay the consequences.