The rock legend had some beef (excuse the pun) with Prince Andrew (of Teddy bears bed and Epstein fame). 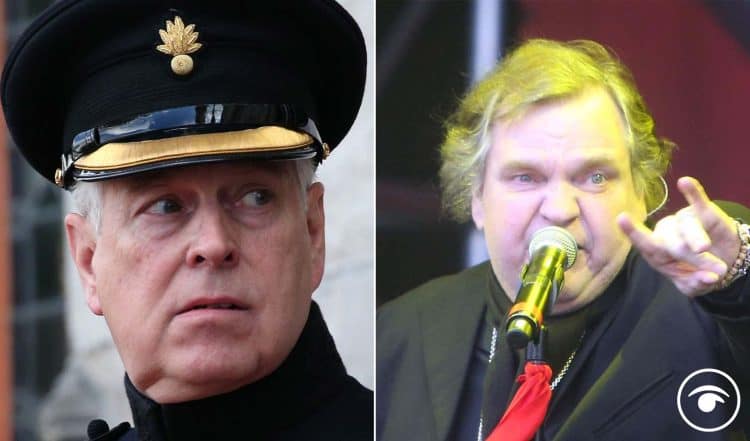 Singer Bonnie Tyler has led tributes to Meat Loaf, saying she is “shocked and saddened” following his death aged 74.

But it was an interaction with Prince Andrew that might make you warm to the loveable singer even more, more of that later.

The American singer, best known for his hit Bat Out Of Hell album trilogy, died with his wife Deborah by his side, a post on his official Facebook page announced.

Meat Loaf, real name Michael Lee Aday, had a career spanning more than six decades and during that time sold over 100 million albums worldwide and starred in some 65 movies.

Welsh singer Tyler, who released a compilation album with Meat Loaf in 1989 titled Heaven & Hell, wrote on Twitter: “I am shocked & saddened by the sudden death of Meat Loaf.

“He was, as you might imagine, a larger than life character with a voice & stage presence to match & is one of those rare people who truly was a one-off talent and personality. Rest In Peace.”

Queen’s Brian May said he is “completely gutted” that the singer “has left us”.

Alongside a picture of himself and Meat Loaf on Instagram, May wrote: “Remembering great times. Completely gutted that Meat Loaf has left us. Always full of madness, with the innocent sense of naughtiness of a 5-year old, Meat was forever young.

“I called him Mr Loaf, and he called me when he wanted some wacky guitar playing. We had so much fun so many times, and, just three months younger than me, he felt like a brother. Dear Meat, the world is mourning and will miss your fine and powerful presence for a very long time. RIP. Bri.”

Singer Boy George shared his own memories of Meat Loaf on Twitter, posting: “R.I.P Meatloaf. Love and prayers to all his family and close friends.

“He once turned me upside down in a Chinese Restaurant in St Johns Wood.”

Irish singer-songwriter Imelda May shared a black and white photo of herself with Meat Loaf.

She captioned the Twitter post: “Meatloaf has passed. I’m so lucky I got to know, sing and laugh with such a wildly talented, charismatic, big hearted, supportive, high spirited and wonderful man.

“My love to Deborah, his daughters and right hand man @PaulCrookMusic.”

Singer Adam Lambert, who found fame on American Idol and has since performed with rock band Queen, tweeted: “A gentle hearted powerhouse rockstar forever and ever.

“You were so kind. Your music will always be iconic. I’m sure you’re singing concerts in the great beyond. Rest In Peace sir. #MeatLoafRIP.”

Actor Stephen Fry shared a video of a comedy sketch the pair had done on Saturday Live in the 1980s and noted what a “fun time” he had performing with the singer.

He added: “I hope paradise is as you remember it from the dashboard light, Meat Loaf.”

BBC Radio 2 DJ Jo Whiley described his voice as “extraordinary” and said Bat Out Of Hell was the soundtrack to her youth.

He tweeted: “Proper sad to hear this. I got to hang out with him for a while in Australia.

GMB presenter Ben Shephard also recalled the “extraordinary experience” of playing a game of golf with the singer and described him as “so full of life in every sense”.

Bat Out of Hell: The Musical will pay tribute to the musician during Friday night’s show at the New Wimbledon Theatre.

Ok so the rock legend had some beef (excuse the pun) with Prince Andrew (of Teddy bears and Epstein fame).

The singer threaten to chuck Andrew into a moar while filming It’s A Royal Knockout TV show together in 1987. As an aside, the show was hosted by Stuart Hall, later convicted of multiple sex offences against children.

Meatloaf claimed he told the Duke of York “I don’t give a shit who you are” after Andrew allegedly tried to push him into the water while they filmed the show.

In an interview with the Guardian Meat Loaf said: “It was great fun. I had a great time.

“Fergie wasn’t exactly flirting with me, but she was paying attention to me, and I think Andrew got a little – I could be wrong, I’m just reading into this – I think he got a little jealous.

The un-starstruck star then said: “So I turned around and I grabbed him and he goes, ‘You can’t touch me. I’m royal’.

Yes the show really did happen, watch the full version here…it will make you cringe into next week and beyond.

A short clip slagging it off can be found here.

Related: Andrew sweats over £10m offer to Giuffre but she wants her day in court