Former Conservative co-chair Baroness Warsi said Tories failed to deal with ‘vile evidence of racism in the party at every level from MPs to activists.' 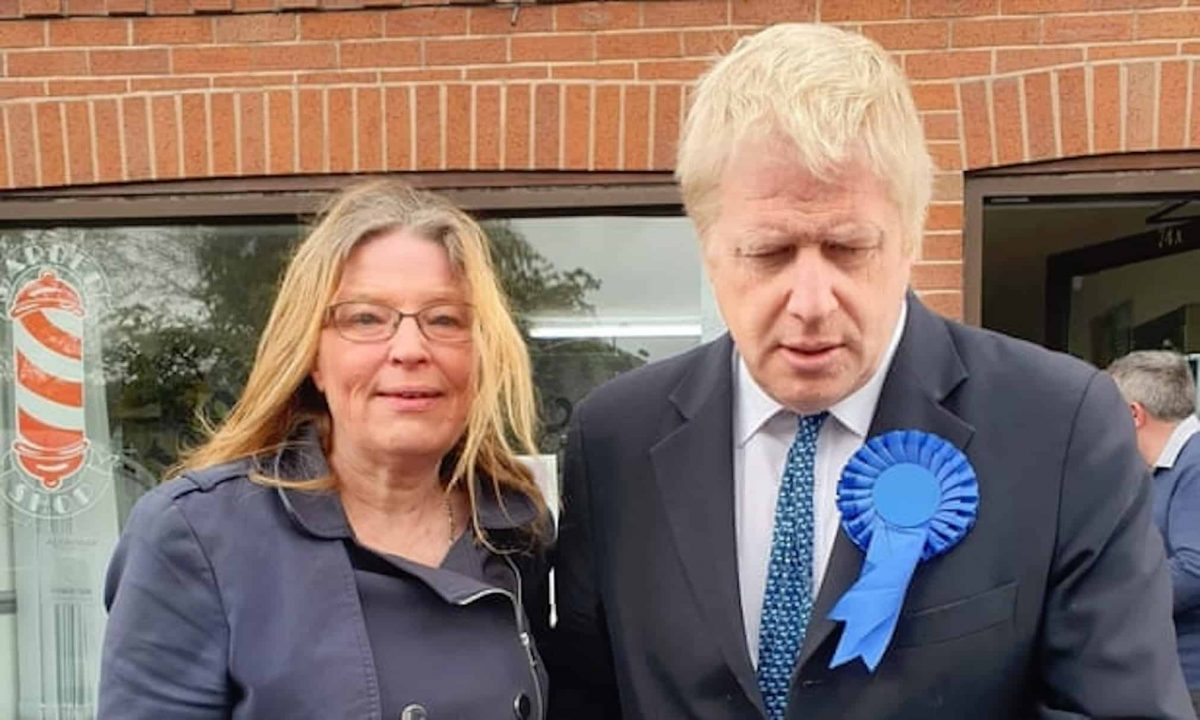 Twenty-five sitting and former Conservative councillors have been revealed to have posted, shared and liked racist and Islamophobic material on social media.

The dossier that we have seen has been passed to the Conservative Party and resulted in all 25 being suspended.

The vile posts include one councillor (pictured above with Boris Johnson) agreeing that all aid to starving people in should stop, allowing “mother nature take her course”.

Walsall councillor Vera Waters replied: “It’s nature’s way of depopulation.” Other comments by 15 current and 10 former Tory councillors include calls for banning all mosques and refering to followers of Islam as “barbarians” and the “enemy within.”

Paul Marks, Conservative councillor in Kettering attacks London’s Mayor Sadiq Khan over his faith, suggesting the London Mayor “will always lobby against anybody or anything which finds itself in direct conflict with Islam”.

‘Vile evidence of racism in the party at every level from MPs down to activists.’

Former Conservative Party co-chair Baroness Saida Warsi who has repeatedly called for an independent inquiry into Islamophobia in her party said she was appalled by the Tories breaking a promise to hold one.

She said that time and again the Tory party had not taken seriously “the most vile evidence of racism in the party at every level from members of parliament down to activists.” The peer said: “people are only suspended for a week and when media attention moves on, it transpires that they are let back into the party.”

The new dossier was compiled by @matesjacob, an anonymous Twitter user who campaigns against racism. After being presented with the posts by the Guardian the Conservative party suspended all those who are still members pending an investigation.

The Twitter user reminded us of an article The London Economic ran about a Twitter post by Jacob Rees-Mogg in which he had tweeted a critique by his journalist father and editor of the Time Baron Rees-Mogg of Enoch Powell’s infamous ”rivers of blood” speech. Jacob Rees-Mogg had appalled many of his more racist follower with his tweet.

Sadly, the Leader of the House of Commons has since deleted the tweet about standing up to racism.

“It was anti-Enoch Powell, but then he deleted the tweet around the time that he started cosying up to Boris. I can’t imagine an innocent explanation for why he would delete an anti-racist tweet” said @matesjacob.

The Conservative Party has a “serious and deep problem with Islamophobia”, Baroness Warsi warned. The Tory peer said the party is failing to deal with the problem “institutionally” and accused it of being “dismissive” of the issue four years after problems were first brought to light.

The party’s former co-chairwoman told BBC Radio 4’s Today programme: “I’m starting to question just how much needs to come to light before the party finally acknowledge that we have a serious and deep problem with Islamophobia and that institutionally we’re failing to deal with it.”

She said the party has an “institutional problem”, adding there had been “dossier after dossier, dozens and dozens of cases presented with the most vile evidence of racism within the party at every level from MPs all the way down to our ordinary activists”.

“I welcome any form of an inquiry – I think I’ve got to the point where beggars can’t be choosers any more – but I am disappointed that the party, having now realised that it is a real problem in relation to a specific form of racism, is still trying to absolve its responsibility by trying to dilute what it is that it’s going to look at.

“The fact that we’re still prevaricating about even having an inquiry and the kind of inquiry we’re going to have shows just how dismissive the party have been on the issue of Islamophobia.”

Chancellor of the Duchy of Lancaster Michael Gove earlier insisted “we have tackled Islamophobia firmly and clearly” and again accused the Labour Party of not tackling antisemitism, despite the open inquiry the party has held and upping staff dealing with any party members accused.

Michael Gove told BBC Radio 4’s Today Programme: “In terms I said we will have our own investigation, of course, into Islamophobia and prejudice.”

Yet he went back on a previous promise that the programme producers found where he had said there would be an independent inquiry into Tory Islamophobia by the end of the year.

“The Tories are cynically using antisemitism as a core part of their campaign and despite Michael Gove’s embarrassing and desperate interview they are letting racists off lightly with one month suspensions,” reacted Faiza Shaheen the Labour candidate standing against Iain Duncan Smith in Chingford and Woodford Green after Gove’s car crash interview in which he reiterated accusations against the Labour Party, while denying he had promised an independent inquiry into Islamophobia by the end of the year.

Boris Johnson was last year reported to the Equalities Commission after comparing Muslim women who wear burqas to “letter boxes” and bank robbers. An increase in hate crimes against Muslims, particularly Muslim women was reported after his remarks.

The comments were part of a long legacy of racist, sexist and homophobic remarks by Johnson.

In the wake of the London bombings, Johnson infamously questioned the loyalty of British Muslims and insisted that the country must accept that “Islam is the problem.”

Writing in the Telegraph in 2002, Johnson referred to a visit to Africa by the then prime minister Tony Blair.

“What a relief it must be for Blair to get out of England. It is said that the Queen has come to love the Commonwealth, partly because it supplies her with regular cheering crowds of flag-waving piccaninnies,” he wrote, referring to African people as having “watermelon smiles.”

Shadow equalities minister Naz Shah said: “The Conservative Party is rife with Islamophobia, racism and bigotry from top to bottom, but we have no faith that Boris Johnson will do anything about it.

“Johnson’s comments about Muslim women looking like ‘bank robbers’ and ‘letter boxes’ were linked to a 375% rise in anti-Muslim hate crime, and polls show a majority of Conservative Party members hold Islamophobic views.

“Boris Johnson must commit to a full independent inquiry into Islamophobia and stop pretending it doesn’t exist in his party.”

A Conservative party spokesperson said: “All those found to be party members have been suspended immediately, pending investigation. The swift action we take on not just anti-Muslim discrimination, but discrimination of any kind is testament to the seriousness with which we take such issues.

“The Conservative party will never stand by when it comes to prejudice and discrimination of any kind. That’s why we are already establishing the terms of an investigation to make sure that such instances are isolated and robust processes are in place to stamp them out as and when they occur.”

Who is afraid of the real Jeremy Corbyn?