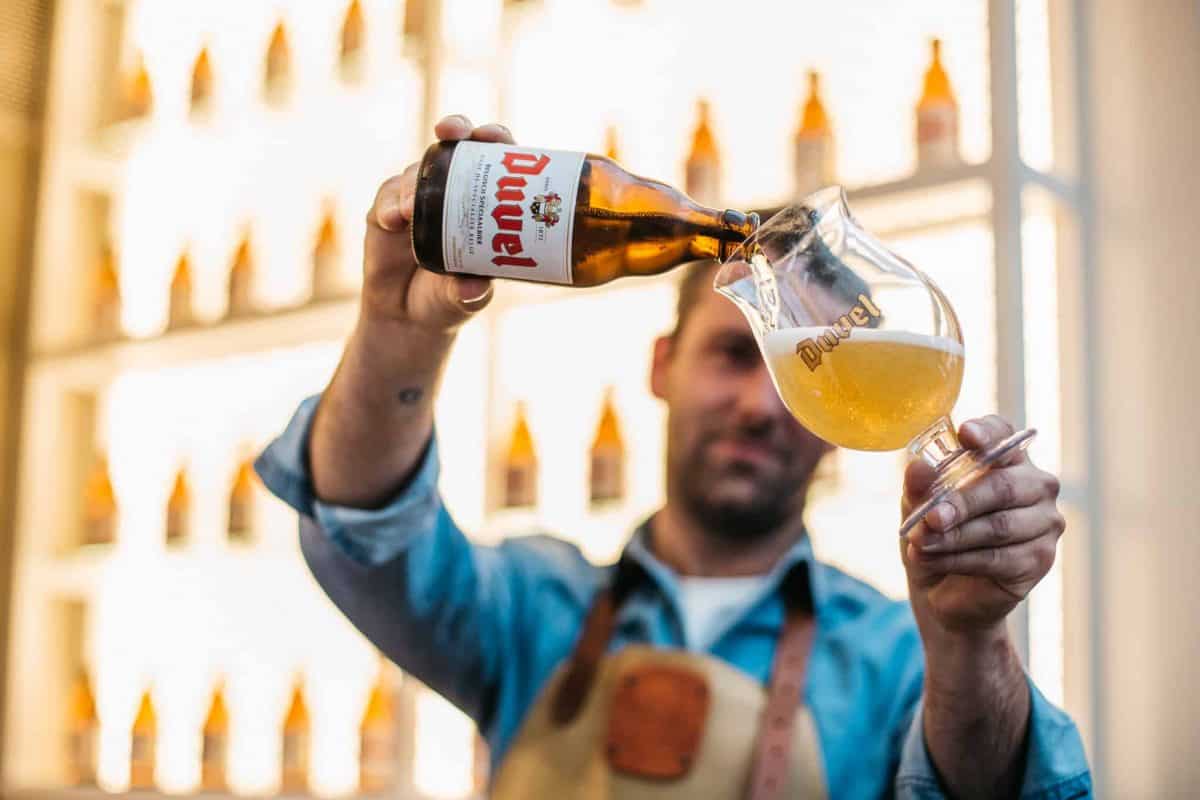 Established by Jan-Léonard Moortgat, the Moortgat brewery farm was founded in 1871. Operating from a site in Belgium, the family began to produce Duvel (pronounced “DOO-vul”), a strong golden pale ale produced using a unique, 90-day brewing process. By 1900, business was booming and Jan-Léonard Moortgat’s two sons, Albert and Victor, joined the company. During the 1960s, the third generation of Moortgats came up with the idea of creating a specific glass to best showcase the beer’s flavours and aromas, with Duvel becoming the first beer brand to develop its own tulip glass; while the family’s fourth generation joined the business during the ‘90s and pushed to make the company truly international.

Generally considered the definitive example of Belgian strong pale ale, Duvel is brewed with Pilsner malt and hopped with Saaz hops and Styrian Goldings. The beer is also live bottle-conditioned, with the first fermentation taking place in tanks using the brewer’s own culture and the original yeast strain (originating from Scotland) selected by Albert Moortgat during the 1920s.After maturing in conditioning tanks, the beer is ready for bottling. Thanks to the addition of extra sugars and yeast, Duvel ferments again in the bottle in warm cellars (a process with takes a further two weeks). The beer is then moved to cold cellars, where it continues to mature and stabilise for a further six weeks.

Moreover, Duvel is also committed to the environment, limiting its ecological footprint wherever possible. All electricity for the brewery is 100 per cent green, from renewable sources, and Duvel has been purifying the waste water in the production process for almost a quarter of a century, before adding a brand-new water purification station, which has been operational since the summer of 2017.

Bottled at 8.5 per cent ABV, Duvel’s flagship beer is sweet and notably effervescent. On pour, the pale golden liquid is capped with a foamy white head, vaunting grassy hop aromas alongside some pronounced yeastiness, slight black pepper and apple. On the palate, the beer’s flavour profile is intense – dry, moderately bitter, and carried by a sweetness with savours of honey and fruits such as apple, lemon, pineapple and feint banana before some spicy yeast notes prevail and linger on the long, grassy finish with further nuances of black pepper in the background. A beer that’s also remarkable in regards to food pairing, delicious with lightly spiced dishes.

Further information on Duvel can be found here.