"If they can’t stand each other, who else would stand them?" wrote Labour's Angela Rayner in response to the Tory row. 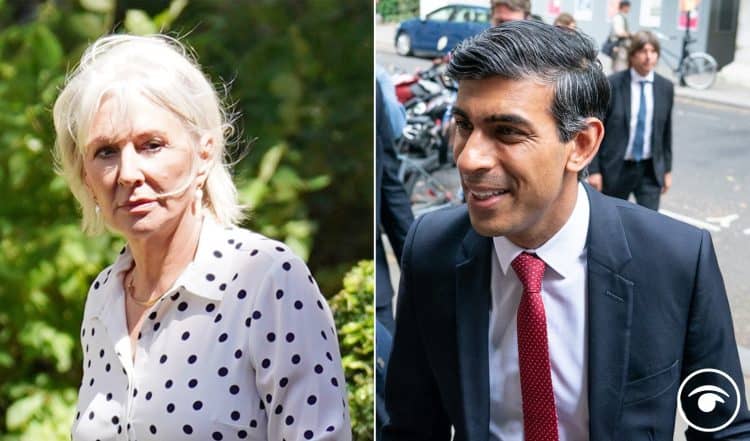 How do you think Nadine Dorries has taken Boris Johnson being ousted from office?

She seems to think it was a coup and not the removal of an awful politician from the highest post in the country.

Dorries also seems to be holding a grudge against the former Chancellor.

It comes as the two Tory leadership hopefuls have been engaged in bitter clashes over immigration, China and tax cuts ahead of a crunch TV debate on Monday evening.

Mr Sunak also came under pressure from his rival over his strategy to combat illegal migration, as he seeks to win over the Tory grassroots voters who will decide the next Conservative leader.

Calling the current system “broken”, he offered a 10-point plan on Sunday that included a commitment to a narrower definition of who qualifies for asylum compared to that from the ECHR, with enhanced powers to detain, tag and monitor illegal migrants.

Mr Sunak, who was on the campaign trail on Sunday, also promised to give Parliament control over who comes to the UK by creating an annual cap on the number of refugees accepted each year, albeit one that can be changed in the case of sudden emergencies.

But those proposals were picked apart by Truss allies, who raised questions about Mr Sunak’s proposals, arguing that it was unclear how the refugee quota would work and suggesting that some of his plans amounted to a “rebrand”.

Allies of Ms Truss also queried a suggestion from Mr Sunak that illegal migrants could be housed on cruise ships, something the Truss camp suggested would amount to arbitrary detention and a breach of both domestic and international law.

So possibly with this debate in mind, she tweeted an article about Sunak wearing expensive clothing.

She wrote: “.⁦@trussliz⁩ will be travelling the country wearing her earrings which cost circa £4.50 from Claire Accessories.

“Meanwhile… Rishi visits Teeside in Prada shoes worth £450 and sported £3,500 bespoke suit as he prepared for crunch leadership vote.”

So what did other party members make of this?

One person who is definitely not impressed is Angela Richardson, the Conservative MP for Guildford. She replied to Nadine’s tweet and wrote: “FFS Nadine! Muted.”

It was just more fuel to the Labour fire. Anglea Rayner also commented on the tweet and said: “If they can’t stand each other, who else would stand them?”