A Ukrainian journalist who fled over border said: “Nato is not willing to defend because Nato is afraid of World War Three, but it’s already started and it’s Ukrainian children who are there taking the hit.” 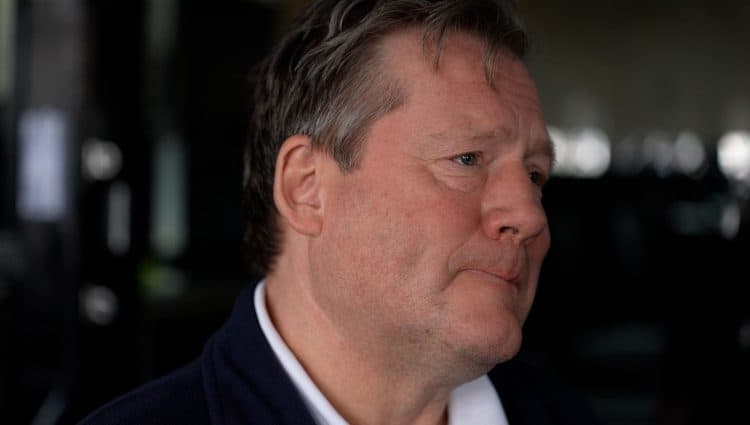 A Tory MP has been criticised by Downing Street for travelling to Ukraine against his own Government’s advice.

It comes as Boris Johnson admitted that Nato will not create a no-fly zone above Ukraine.

Adam Holloway, a former soldier and MP for Gravesham, Kent, has appeared in television interviews after crossing into the war-struck country from south east Poland.

Speaking to GB News, he described “extraordinary scenes” of refugees queueing at the border to flee Ukraine.

The 56-year-old, who serves on the Foreign Affairs Select Committee, appears to have gone against the Government’s own guidance with the Foreign Office advising against all travel to Ukraine.

The Prime Minister’s official spokesman said he was not aware of Mr Holloway’s trip to Ukraine but “our advice applies to everyone”.

Asked if Mr Holloway should come home, the spokesman said: “He should certainly not travel to Ukraine.”

Mr Holloway told the TV channel that he started his day by going to McDonald’s near the border which was “packed with women and children and a few elderly people”.

He continued: “We then went up the road a couple of miles and I crossed over into Ukraine and then really quite extraordinary scenes of thousands of women and children queuing at the border, men separated, foreign men separated, some of them have been living in these corralled areas in the border posts for four days and nights in the cold.

He described volunteers in a children’s nursery packing up donated medical supplies into medical kits for soldiers, before he headed to a military conscription site.

Mr Holloway, who has previously worked as an investigative reporter for ITN and ITV, said: “We went round the corner and there was a place where people volunteer to sign up for the military, and we ran into Ukraine’s top concert pianist Igor Grubin.

“It was fascinating talking to him, because so many people are volunteering for the military that they’re only taking people with actual military experience, there just aren’t enough guns.

“I’ve only been on the ground for just over 12 hours but it seems to me that these people here are absolutely determined to fight.

“If you look at the moral component of warfare, and as you know I used to be a soldier, that is the decisive thing.

“We can’t know what’s going to happen over the next few days and months but one thing I can absolutely tell you is that these people here, certainly where I am right now and I think right across Ukraine, it does feel to me as if they’re going to fight.”

Boris Johnson has insisted no Nato allies are contemplating heeding Ukraine’s pleas to enforce a no-fly zone over the nation to prevent bombings from Vladimir Putin’s planes.

With the invasion of Ukraine in its sixth day, Mr Johnson visited Nato members Poland and Estonia to shore up support for the defence alliance.

But he ruled out British forces fighting in Ukraine, as he faced impassioned calls for a no-fly zone to be imposed to protect civilians as a major assault on Kyiv was feared to be nearing.

Mr Johnson clarified that the UK is not actively supporting British nationals volunteering to help the defence of Ukraine, contradicting an earlier remark from Foreign Secretary Liz Truss.

“I think for any Nato member to get involved actively in conflict with Russia is a huge step which is not being contemplated by any member,” Mr Johnson stressed during a press conference against the backdrop of armoured vehicles, at the Tapa military base in Estonia.

“This is a time when miscalculation and misunderstanding is all too possible and it’s therefore crucial that we get that message over.

“When it comes to a no-fly zone in the skies above Ukraine we have to accept the reality that that involves shooting down Russian planes … that’s a very, very big step, it’s simply not on the agenda of any Nato country.

“We will not fight Russian forces in Ukraine,” he added. “Our reinforcements like these reinforcements here in Tapa are firmly within the borders of Nato members.”

In an earlier visit to Warsaw, Poland, a Ukrainian journalist who fled over the border made an impassioned plea for Mr Johnson to assist with a no-fly zone.

Daria Kaleniuk, the executive director of the Anti-Corruption Action Centre civil society organisation, said: “Nato is not willing to defend because Nato is afraid of World War Three, but it’s already started and it’s Ukrainian children who are there taking the hit.”