"Neil Oliver: I don't know what's happening in Ukraine. I don't understand it either. But here are my opinions anyway," joked one person in response. 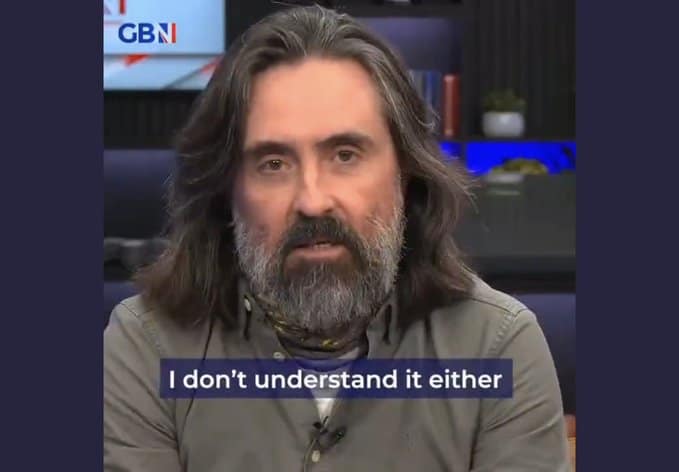 A GB News host has been panned for admitting he didn’t know what was going on in Ukraine – before immediately pontificating about Ukraine.

In a clip which quickly did the rounds on Twitter on Monday, presenter Neil Oliver began a piece to camera by admitting: “I’ll be honest. I don’t know what’s happening in Ukraine. I don’t understand it either.”

Undeterred, he went on to claim that he ignores most of “the mainstream media” because he doesn’t trust it, and suggested there are “as many different assessments and explanations of the situation in Ukraine as there are people with keyboards and phones.”

Whatever Vladimir Putin “is up to” in Ukraine, he continued, “the West must accept responsibility for a share of the blame for what is now being suffered and endured by ordinary people there.”

He added: “Whatever Putin has done, whatever Nato and the governments of the EU have done – and I say again I don’t feel anywhere close to knowing what’s been going on, and what is going on – men, women and children are sheltering underground on European soil in 2022. Soldiers on both sides are dying.

“I do know that I don’t trust Putin, or our government, or Europe’s governments, or the governments of North America either. I certainly don’t trust any of them to tell the truth.”

Unsurprisingly, Oliver’s take was quickly derided as “nonsense”. Columnist Mark Wallace replied: “Really, WTF is this relativist nonsense – if your starting position is ‘I don’t know what’s happening’, the next step is to find out, not use ignorance as the foundation for some rambling declaration of wibble.”

Former Tory adviser Nick Timothy added: “There are some brilliant people at GB News who must be wondering how and why this s*** has been aired.”

And Robert Shrimsley, a journalist with the FT, added: “Neil Oliver: I don’t know what’s happening in Ukraine. I don’t understand it either. But here are my opinions anyway.”