Lizzie Dearden of The Independent has applied for a stalking protection order against the EDL founder. 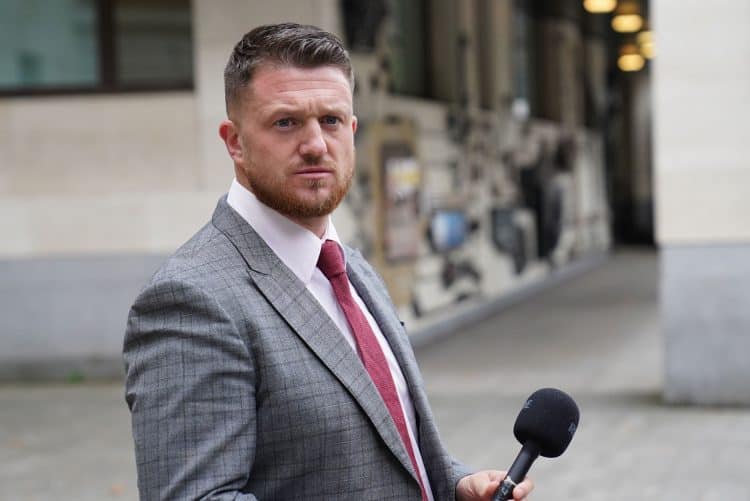 A journalist was “too frightened” to go to the door when English Defence League founder Tommy Robinson turned up at her home “very angry and agitated”, a court has heard.

Robinson, whose real name is Stephen Yaxley-Lennon, was in court regarding an application for a stalking protection order after he went to the home of Independent home affairs correspondent Lizzie Dearden and her boyfriend, Samuel Partridge.

Robinson, 38, attended the hearing at Westminster Magistrates’ Court on Friday despite the expectation that he would join proceedings remotely due to Covid-19 isolation.

Both Dearden and Partridge gave evidence but the case was not concluded and it was adjourned to 26 August.

‘I will be back every day’

The court heard that Robinson went to Dearden’s home on 17 January – days after a request for comment through his solicitors about a story alleging that he misused money donated by his supporters.

Ryan Dowding, representing the Metropolitan Police, said Robinson did not respond to the email, but instead went to Dearden’s home.

Dowding said there was “shouting about Mr Partridge, claiming he was a paedophile”, adding: “There were then threats to come back every day if he needed to.”

He said these threats appear on a video which Robinson filmed, where he can he heard saying: “Lizzie, I will be back every day if I have to.”

Dowding said Robinson was with someone in a Range Rover who was sounding the horn loudly throughout.

The court previously heard that Robinson, who was arrested over the incident, later posted two pictures of Partridge online before sending an email to Dearden purporting to comment on her story about him, in which he falsely claimed to have a source who said Partridge had groomed a child.

Dearden gave evidence remotely on Friday and was asked why she did not wish to go to speak to Robinson when he attended her home.

She told the court: “Because I didn’t know what he was going to do, and, from what I could hear on the intercom and through the street, he sounded very angry and agitated.

“Basically, I was too frightened to go down.”

She said she “called 999 so quickly” and could hear Robinson asking for her partner by name and then her by name.

It was put to Partridge, who also gave evidence remotely, that he had overstated in his statement the extent to which Robinson was loud and agitated.

Partridge said he disagreed, and, when it was put to him that Robinson was “relatively polite” over the intercom, Partridge said: “He was polite to begin with. That changed very quickly.”

Ikram agreed to impose an interim order in March ahead of the full application for a stalking protection order.

At the time he said he was satisfied that the temporary order was “necessary and proportionate” because the acts were “capable of being associated with stalking” and there was an “ongoing risk”.

“What the police say in this case is he has embarked on all of this to persuade her not to publish the story, and he sought to do so by the threat of publishing his own allegations about her partner, which it’s said are simply not true,” Ikram said at the hearing in March.