Hundreds of schools and nurseries are shut as low paid women in Glasgow stirk over equal pay. Around 8,000 members from UNISON and GMB trade unions – including learning support workers, home carers, cleaners – are taking part in the industrial action. It will be the largest industrial action of its type since the Equal […] 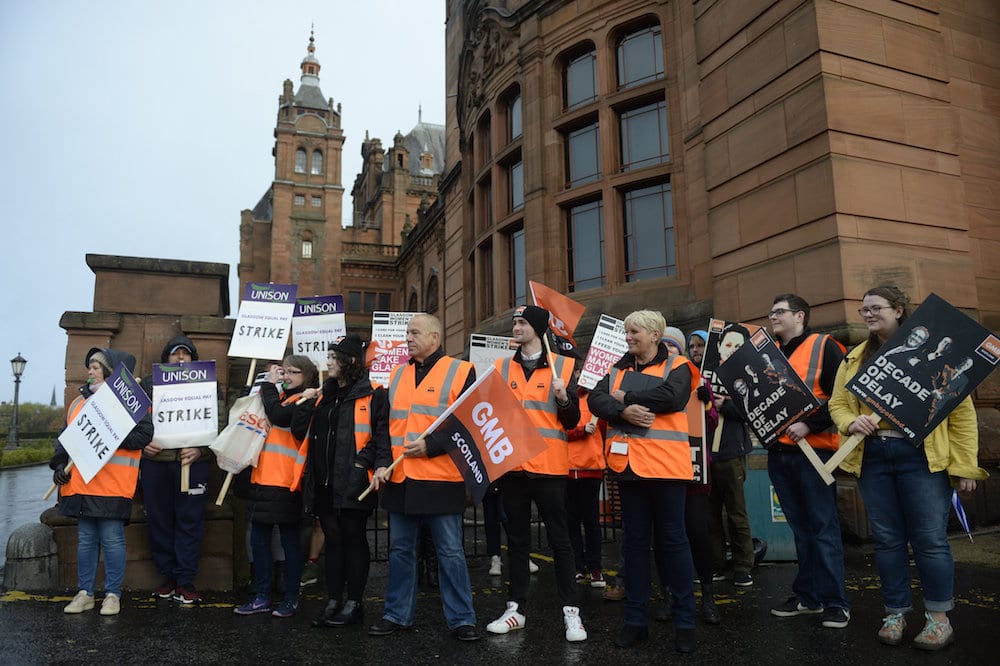 Hundreds of schools and nurseries are shut as low paid women in Glasgow stirk over equal pay.

Around 8,000 members from UNISON and GMB trade unions – including learning support workers, home carers, cleaners – are taking part in the industrial action.

It will be the largest industrial action of its type since the Equal Pay Act was passed in the wake of the Ford sewing machinists strike in 1968.

Widespread disruption is expected today and tomorrow as the strike affect schools, nurseries, home care, cleaning and catering services across the city.

Glasgow’s female workers will march across the city from Glasgow Green to George Square demanding council bosses continue negotiations to put an end to unequal pay.

There will be hundreds of picket lines across the city, including outside Kelvingrove Art Gallery and Museum, Hillhead Primary School and Glasgow Botanic Gardens.

Glasgow City Council announced plans in January to reach a negotiated settlement regarding thousands of equal pay claims resulting from a pay and conditions scheme set up more than a decade ago.

Campaigners have complained that the scheme led to workers in female-dominated roles such as catering or cleaning receiving up to £3 an hour less than those in male-dominated areas such as refuse collection.

Unions claim the negotiations have made no progress despite 21 meetings being held in the past 10 months.

But the council has deemed the action “unnecessary and dangerous”.

A spokesman for GMB, said: “Obviously there’s a backstop to this and quite simply we’re in dispute because of the court judgement last year where it found the council’s job evaluation scheme wasn’t fit for purpose.

“That legal judgement opened the way for a solution process which started in November with council officials, but no progress has been made.

“Us, Unison and Action 4 Equality have been fighting this and what’s happened is the council chief executive said there will be no further negotiations unless we call off the strike.

“But we’re at this stage because of the council’s refusals to move on with this dispute.

“It’s important to bury party politics, this is about council roadblocks with yet another administration where the council leader is saying one thing and the chief executive is saying another.

“There’s a contradiction at the heart of Glasgow City Council between the heads and the elected representatives.

“The reality is that these women have waited a decade for equal pay justice and have been ignored by council officials, and we’re prepared to meet and negotiate with them anytime, anywhere.”

A Glasgow City Council spokesman said: “This strike is unnecessary and dangerous.

“Unnecessary because the council is absolutely committed to delivering equal pay and reaching a negotiated settlement – and dangerous because its impact will be felt most keenly by the most vulnerable people in the city.

“We understand why many of our workforce are angry about equal pay, but there is nothing that this strike can achieve that we are not already doing.”

She said: “Forty years on from the equal pay act being introduced we find ourselves standing alongside thousands of women who are being discriminated against by one of the UK’s largest councils.

“These women are the lifeblood of Glasgow, they carry out vital roles across the city – cleaning, caring, educating and looking after some of the most vulnerable people in our society.

“They are the cogs that keep our city turning yet their roles remain chronically undervalued.

“Strike action isn’t a decision these women have taken lightly but after months of empty promises they have been left with no choice.

“Glasgow City Council has to get back around the negotiating table and finally put an end to this long-standing injustice.”

UNISON Glasgow chair Mary Dawson added: “We have given the council 10 months to make progress on addressing the historical discrimination suffered by these workers.

“However, the council has agreed nothing, offered nothing and all we have had are meetings about meetings and talks about talks. It’s time for some action.”

The strike began at 7:00am on Tuesday, with protesters planning to gather at Glasgow Green before marching to George Square at noon to protest outside the City Chambers.