"Three sets of dirty super-king - albeit Frette - sheets in the back of the car is no one’s idea of “glamorous”". 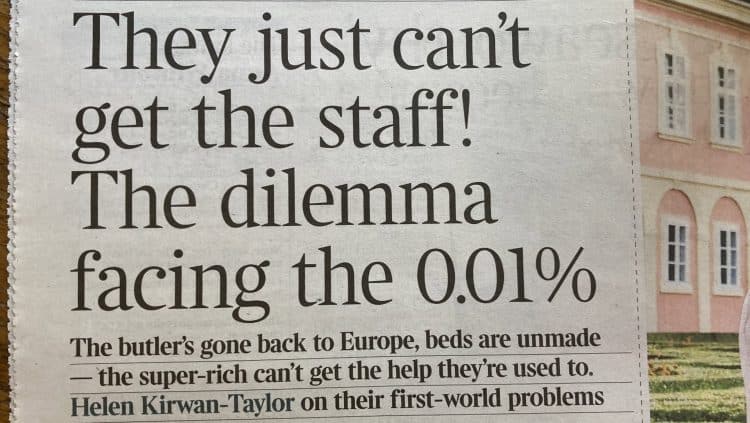 The ultra-rich are suffering severe staff shortages on the back of Brexit and the Covid-19 pandemic, resulting in beds remaining unmade and soirees being cancelled.

According to reports in The Times, the 0.01 percenters are having a rough time of it of late.

The demand for staff has increased by 400 per cent, but there has been 50 per cent fewer applications by candidates for each of the jobs due to staff shortages, according to Lucy Challenger, the CEO and founder of Polo & Tweed.

As a result, many of her country clients are “stranded’’, she says.

The pandemic has increased the popularity of country living significantly, with the rich and powerful picking up a renewed fondness for rural life.

But without the staff to cater to their every need, many have no option other than to close down their country houses altogether.

Philip Hooper, managing director of the interior designer Sibyl Colefax & John Fowler, recently had to play florist to one of his clients because the butler had quit (and returned to Europe).

He says many staff simply refuse to work outside of London. In his words: “Much better to be in a mansion in Mayfair on a wet December night given the choice.”

“People are buying large houses with no idea how they work”

One of the problems is that many people who have purchased country retreats don’t know how to manage them.

It has resulted in, asNuria Cantera, managing director of Manto Household Management says, people buying large houses “with no idea how they work”.

“I see husbands giving servants a set of instructions so sophisticated you want to cry. Houses now have rooms and rooms to run the garage and power the TVs, modems and security. Every house has underfloor heating and special wall-high towel rails to keep the towels and bathrobes warm.

“It takes at least two people to change a Savoir bed,” she says.

The crisis is taking its toll on existing staff too, with many reconsidering their position.

“Two years of Brexit/Covid nightmare has pushed us over the edge,” one tells The Times. “The fact the clients treat us like servants doesn’t help either. One calls lunch meetings. Her chef brings her an elaborate meal on a tray, but my team is not so much as offered a coffee.

“I feel like a European lorry driver: just give me somewhere to shower and have breakfast and I’ll be OK, but they can’t even do that,” they add.

As a result, the super-rich are asking for a different kind of house.

“Clients say they don’t want marble and brass that needs to be polished any more,” Hooper says, “they want tiles that can easily be washed.” They also want four bedrooms rather than ten.

“But who can blame them? In-betweening with three sets of dirty super-king — albeit Frette — sheets in the back of the car is no one’s idea of “glamorous”.”