Professor Chomsky has granted The London Economic an exclusive interview about some of the most urgent issues facing humanity. 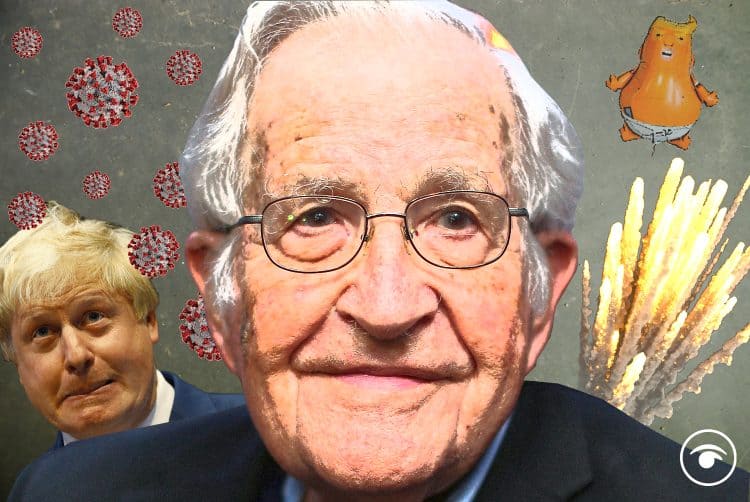 Things are certainly falling apart at the moment, both in the UK and across the world. As British PM Boris Johnson faces possible criminal proceedings for his alleged breaches of lockdown rules, US President Joe Biden says he’s containing Russia’s moves against Ukraine in what could trigger, quite by accident, nuclear war.

Against this backdrop is Omicron, the fastest-spreading variant of the COVID pandemic to date, as well as the climate crisis: the refusal of governments and corporations to act swiftly and comprehensively enough to stop runaway CO2 and other emissions, and to transition to a truly net-zero infrastructure and economy.

I discussed these important issues with Professor Noam Chomsky for The London Economic. Chomsky is Professor Emeritus at the Massachusetts Institute of Technology and Laureate Professor of Linguistics at the University of Arizona, where he also enjoys the warmer weather.

“England is stuck- or has stuck itself – with a rightwing buffoon,” he replied when I asked him how the Johnson regime looks to outsiders; Americans, in his case.

The emphasis is placed on “England” because Northern Ireland, not surprisingly, had mixed feelings about the very Brexit which risks reigniting the Troubles by erecting de facto hard borders between the UK and the Republic of Ireland. This would violate the hard-won Belfast/Good Friday Agreement, which until Brexit had maintained a relative peace in the war-torn region.

At the moment, the Tories’ favourite choice to replace the “rightwing buffoon” is hedge fund Rishi–the billionaire Chancellor, Sunak. But it is possible that former Trade Secretary and Brexiteer Liz Truss, who was recently praised by Nigel Farage on Steve Bannon’s WarRoom as a contender, is second-favourite.

Truss has been described as the “Tufton Street candidate” in reference to her alleged links with the climate denier-think tanks up the eponymous London lane. Glasgow recently hosted COP26: the 26th UN Climate Change Conference of the Parties.

“So far words far exceed actions,” said Chomsky, referring to failed global efforts to take steps against the emergency. “Time is short. Serious efforts must be undertaken right now, well beyond anything that we are seeing.”

In the UK, had the public supported Jeremy Corbyn at the last general election, we could have enjoyed a green infrastructure project. (Chomsky previously told TLE that a Corbyn-led Britain would have pursued “a more sane course.”)

In the US, the most powerful nation (despite a rising China), the Republican Party, or “denalist party,” as Chomsky describes it, remains in the grip of climate-destroying Trumpism.

At the moment, the Democrats have a majority, but “if the denialist party takes Congress in the US November [midterm] elections, we will all be   in deep trouble.” A return to Trump-era energy policies will likely see major caps lifted on polluting industries.

Johnson has opened up the country to score political points and divert from his apparent criminality, even though cases, hospitalisations, and deaths remain significant across the UK.

In the US, many have criticised President Joe Biden’s COVID response, as deaths are climbing, as they did under Trump.

Chomsky has implied that judicial obstacles and vaccine hesitancy are possible reasons for the continuing case and fatalities numbers. When I asked how Biden’s pandemic response compares to Trump’s, Chomsky said it was “much better, but that’s a low bar.”

Referring to overturning federal and employer vaccine mandates, Chomsky noted that “the Courts are in the process of killing Biden’s efforts [to halt the pandemic], and there are plenty of other barriers to dealing sensibly with the crisis.” These include America’s for-profit health system, which the Tories want to bring to the UK.

Much of the blame for America’s COVID crisis can be laid at the feet of Republicans, particularly the MAGA (pro-Trump “make America great again”) faction who backed Trump’s plan to let states decide on their lockdown policies and stuff the judiciary with ultra-right judges who overturn public health mandates.

Chomsky has said that nuclear apocalypse is more likely to be caused by escalation due to strategic mistake and miscalculation than deliberate strike. He has called human survival to date a “near miracle.”

There have been literally dozens of occasions since the awful weapons were invented in the 1940s that the US and USSR alone, never mind other nuclear powers, nearly launched accidental strikes.

Chomsky says that North Atlantic Treaty Organization (NATO) members, pushed by the US, have violated post-Cold War agreements not to advance towards Russia.

“There are straightforward solutions, known on all sides,” says Chomsky. These include honouring prior agreements not to expand NATO and implementing the Minsk II agreement, adopted by France, Germany, Russia, and Ukraine in 2015 and backed by the United Nations Security Council.

Minsk II would reach a compromise. It would disarm Ukraine’s pro-Russian separatists in exchange for ending Ukraine’s plan to join the anti-Russian NATO. But power is more important to some at the top than survival.

“If the existing diplomatic options are ignored in favour or provocative actions and gestures,” Chomsky concludes, “the outcome could be grim.” Terminal, in fact.