Team Johnson benefitted politically from the hard work of scientists, frontline workers, the Armed Forces and, of course, the NHS. 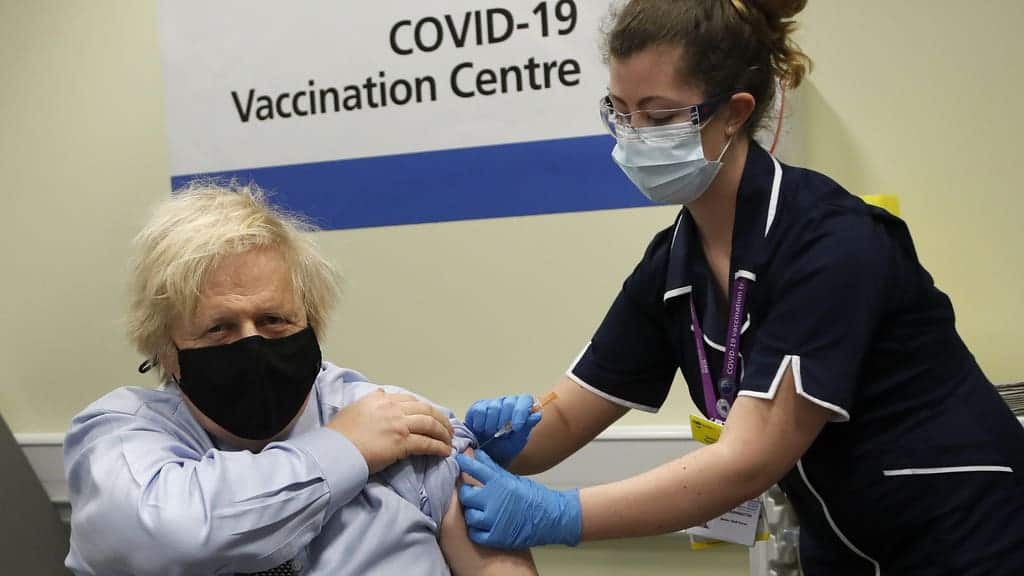 Notice how the Tories use the words “we” and “us” a lot when describing the UK’s vaccination programme.

Vaccines Minister Nadhim Zahawi told Sky News: “We continue to vaccinate to scale … Over 13,000 are alive today because of the vaccination programme.” Likewise, Culture Secretary Oliver Dowden boasted over how “we’ve rolled out the vaccine.” PM Johnson himself listed to NBC News his professed priorities: “Number 1 is continuing the vaccine rollout.”

But these phrases exclude the real vaccine heroes.

Phase one: Thank the public

In the real world, the hard-working British taxpayer is the first person to thank for the Oxford/AstraZeneca vaccine. According to the Financial Times, “AstraZeneca does not own the ChAdOx1 platform behind the vaccine, which belongs to Oxford spinout Vaccitech.”

According to an in-depth study by Samuel Cross of Imperial College London and the team, almost 100 percent of the £228m funding for the ChAdOx vaccine research and development from 2002 to October 2020 came from the public: nearly a quarter from charitable trusts like Wellcome and another quarter from the British taxpayer. We should also thank the Europeans, because, contrary to the Brexit rhetoric, one-third of the funding came from the European Commission.

UK Research and Innovation (UKRI) was set up by PM Theresa May in 2018 as “a non-departmental public body sponsored by the Department for Business, Energy and Industrial Strategy (BEIS).” Another is the National Institute for Health Research (NIHR), part-funded by

Public Health England: an agency that the Tories wanted to dismantle during the pandemic.

The government, through UKRI and the NIHR, awarded up to £2.3 million (together with the World Health Organization, to which the taxpayer also contributes), to Vaccitech. These and other sources boosted Vaccitech’s value to over £420 million, reportedly making co-founder and shareholder Professor Sarah Gilbert £20 million when the company was listed on the NY Stock Exchange.

Boris Johnson told the 1922 Committee: “The reason we have the vaccine success is because of capitalism, because of greed my friends”: the greed of using public money to profit individuals and corporations, for sure.

But this “greed is good” mantra was cobbled together at the last minute due to the pandemic. Prior to that, government had cut relative funding for vaccine projects. Sir Richard Sykes wrote the Foreword to the December 2020 report by BEIS’s Vaccine Taskforce. Sykes credits Oxford University’s Jenner Institute as laying the basis for vaccine research in the UK. Indeed Vaccitech was a spinout from the Institute. Sykes writes that the charity GlaxoWellcome funded the Institute pre-pandemic because “it struggled to obtain Government support.”

But public funding doesn’t end there. The Public Accounts Committee notes that although “minor,” “[a]lmost a fifth of the 200 individuals on the [Vaccine] Taskforce have recorded at least one conflict of interest.” The BEIS was responsible for procuring vaccines from manufacturers in a process that “could have been more transparent.” It turns out that the vaccine production centres– CGTC (Braintree), Valneva (Livingston), and VMIC (Harwell)–are either not-for-profit or government-owned.

After being part of the machinery that for decades had chipped away at the NHS in order to marketise it, the Tories realised that they had to rely on what was left of the public service in order to avert more deaths and hospitalisations. Team Johnson used the NHS for the UK COVID-19 Vaccines Delivery Plan.

“The Department of Health & Social Care (DHSC) is responsible for planning how to deploy the vaccine to the public in England,” says the National Audit Office. “NHS England and NHS Improvement (NHSE&I) and Public Health England are leading on the operational delivery of the vaccination programme including designing and implementing delivery models and making storage and distribution arrangements respectively.”

In addition to the tens of thousands of NHS nurses who administered the jabs, thousands more volunteered to inject the vaccine under the guidance of NHS Professionals, NHS Volunteer Responders, and St. John’s Ambulance. Nurses were rewarded with a Thursday clap, not a pay rise, sufficient PPE in the early stages of the pandemic, or even the vaccines themselves.

Another taxpayer-funded public service pushed out of the way by the Tory PR machine is the Ministry of Defence. From the early days of the rollout, MoD personnel worked with the Vaccine Taskforce on a Vaccine Deployment Programme, which included logistics. Twenty Vaccine Quick Reaction Force mobile teams, each containing six military healthcare experts, were also deployed. Royal Navy medics administered vaccines at Ashton Gate Stadium, Bristol.

In their reports, which the media don’t mention and the public don’t read, the Tories acknowledge to their own departments and to the civil service, the real vaccine champions. But, as noted, to the media and thus the wider public they are quick to take the credit.

In their Foreword to their Department of Health and Social Care report, Health Secretary Hancock and Vaccine Minister Zahawi admit that the success is due to “the culmination of months of preparation and hard work by the Vaccine Taskforce, the NHS, Public Health England (PHE), our research institutions and Armed Forces, and local and regional government at every level.”

In an era in which public opinion is held captive by a lying, privately-owned, right-wing mass media that twists the truth on a daily basis to paint the government in a favourable light, independent investigations are essential for enlightening the reader as to the reality of government policy vs. PR.