The decision comes one week after a Texas law took effect prohibiting abortions once medical professionals can detect cardiac activity in the foetus. 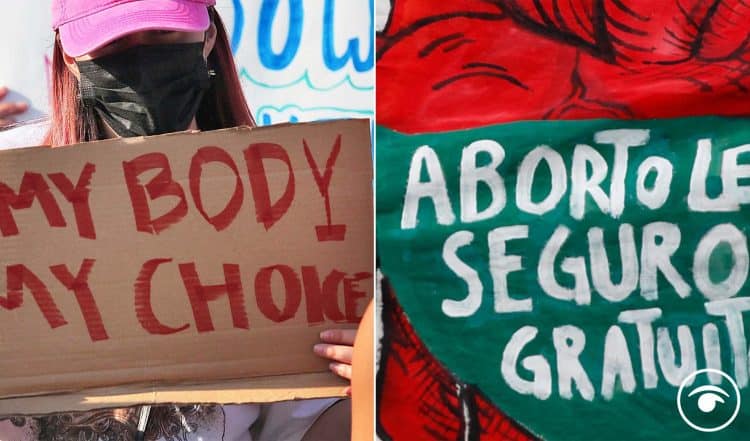 Greg Abbott has defended new abortion laws in Texas by saying victims of rape and incest will have “at least six weeks” to terminate their pregnancy. It comes as over the border in Mexico abortion has become decriminalised.

The Texas Governor was asked why he was forcing a rape or incest victim to carry their child to term on Tuesday.

“It doesn’t require that at all, because obviously it provides at least six weeks for a person to be able to get an abortion,” he replied.

Reporter: Why force a rape or incest victim to carry a pregnancy to term?

Gov. Greg Abbott (R-TX): "It doesn't require that at all, because obviously it provides at least 6 weeks for a person to be able to get an abortion." pic.twitter.com/Mbx5JVHG1D

A divided Supreme Court is allowing a Texas law that bans most abortions to remain in force, stripping most women of the right to the procedure.

The court voted 5-4 to deny an emergency appeal from abortion providers and others that sought to block enforcement of the law that went into effect recently.

The Texas law, signed by Republican Governor Greg Abbott in May, prohibits abortions once medical professionals can detect cardiac activity, usually around six weeks and before most women know they are pregnant.

It is the strictest law against abortion rights in the United States since the high court’s landmark Roe v Wade decision in 1973 and part of a broader push by Republicans across the country to impose new restrictions on abortion.

He’s says that in bad faith. Legislators knew exactly what they were doing. pic.twitter.com/aledfLBDa9

Many women don’t even know they’re pregnant by the 6-week mark when abortion is outlawed in this bill.

Rape and incest victims would be forced to carry a pregnancy to term at that point—or face civil lawsuits for getting an abortion. https://t.co/wyHmk1wcLU

THAT'S NOT HOW PREGNANCY CALCULATION OR ABORTION CARE WORK, YOU SCUM OF A LEADER @GregAbbott_TX

REMINDER: 6 WEEKS IS BEFORE MOST PEOPLE EVEN KNOW THEY ARE PREGNANT https://t.co/MQVy3stG9Y

Mexico’s Supreme Court has ruled that it is unconstitutional to punish abortion, unanimously annulling several provisions of a law from Coahuila — a state on the Texas border — that had made abortion a criminal act.

The decision will immediately affect only the northern border state, but it establishes a historic precedent and “obligatory criteria for all of the country’s judges,” compelling them to act the same way in similar cases, said court President Arturo Zaldívar.

“From now on, you will not be able to, without violating the court’s criteria and the constitution, charge any woman who aborts under the circumstances this court has ruled as valid.”

The decision comes one week after a Texas law took effect prohibiting abortions once medical professionals can detect cardiac activity in the foetus.

It allows any private citizen to sue Texas abortion providers who violate the law, as well as anyone who “aids or abets” a woman getting the procedure.

Only four Mexican states — Mexico City, Oaxaca, Veracruz and Hidalgo — now allow abortion in most circumstances. The other 28 states penalise abortion with some exceptions.

Mexico is a heavily Roman Catholic country. The church was a powerful institution through colonial times and after Mexico’s independence, but a reform movement in the mid-19th century sharply limited the church’s role in daily life.

Anticlerical efforts at times led to bloodshed, especially during the Cristero Rebellion from 1926 to 1929.

In a previous decision, the Supreme Court ruled in favour of women who had been imprisoned or had their rights violated for abortions. But Rebecca Ramos, director of the nongovernmental reproductive rights group GIRE, said the latest case was the first time the justices debated the fundamental question of whether abortion should be considered a crime or not.

The decision could potentially open another option for Texas women seeking legal abortions.

For years, some women in south Texas have crossed the border to go to Mexican pharmacies to buy misoprostol, a pill that makes up half of the two-drug combination prescribed for medical abortions.