Andrew has not yet responded to lawsuit filed in US by Jeffrey Epstein's former sex slave Virginia Giuffre. 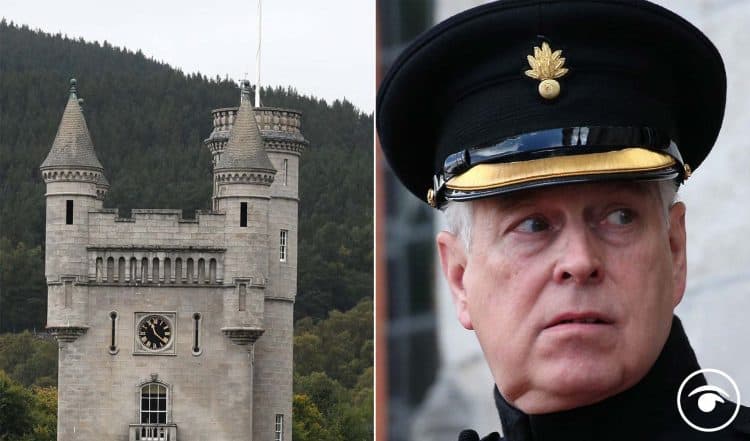 It has been reported that Prince Andrew made a dash to his mum’s estate to avoid being served legal papers at his Windsor mansion. It comes as his brother Charles has come under fire over his role in a cash for honours scandal.

The Sun claimed that he was snapped leaving the Royal Lodge.

Andrew has rejected several attempts over the past fortnight by US lawyers to serve legal papers on his doorstep as security guards turned them away.

To avoid this he went on a 500-mile ride to the Queen’s 50,000 acre estate in Scotland, with his ex-wife Sarah Ferguson. The Queen is thought to be staying at her Scottish pad currently.

It comes as he has failed to respond to Jeffrey Epstein’s former sex slave Virginia Giuffre lawsuit in New York a month ago accusing him of “rape in the first degree”.

The civil suit is due to be heard via a telephone conference in New York on September 13. Ms Giuffre, now 38, claims she was forced to have sex with Andrew three times on the orders of paedophile financier Epstein.

She claims that the first time she was forced to have sex with Andrew was at the London townhouse of Ghislaine Maxwell, Epstein’s alleged madam. The second is claimed to have been at Epstein’s mansion in New York.

The third incident was on Epstein’s private island in the Caribbean.

The Prince of Wales has “no knowledge” of the alleged cash-for-honours scandal, Clarence House has said after Charles and his most trusted aide were reported to the police over the claims.

The pressure group Republic has contacted Scotland Yard and reported both future king Charles and his former royal valet Michael Fawcett on suspicion of breaching the Honours (Prevention of Abuses) Act 1925.

Mr Fawcett, who has temporarily stepped down as chief executive of Charles’s charity The Prince’s Foundation, is accused of promising to help secure a knighthood and British citizenship for a Saudi billionaire donor.

The Mail on Sunday published a letter from 2017 in which Mr Fawcett reportedly wrote that he was willing to make an application to change businessman Mahfouz Marei Mubarak bin Mahfouz’s honorary CBE to a KBE, and support his application for citizenship.

The letter, written on headed notepaper in Mr Fawcett’s then capacity as chief executive of the Dumfries House Trust, said the applications would be made in response to “the most recent and anticipated support” of the trust.

A Clarence House spokesman said: “The Prince of Wales has no knowledge of the alleged offer of honours or British citizenship on the basis of donation to his charities and fully supports the investigation now under way by The Prince’s Foundation.”

Graham Smith, chief executive of Republic, which campaigns for an elected head of state, said: “Failure to properly investigate these matters will damage public trust in the police, the royals and the honours system.”

He added: “Time and again the royals blame their staff or associates for their own mistakes.

“It is difficult to believe Charles wasn’t aware of these arrangements or promises. It’s time the royals were personally challenged over their conduct.”

Mr Baker, the author of a book about royal family finances titled And What Do You Do? said: “There appears to be prima facie evidence that an offence has been committed under the 1925 Honours (Prevention of Abuses) Act and it needs to be investigated.”

He added: “The prince should own up and accept responsibility for this.

“The history of him and Michael Fawcett is that when things go pear-shaped, Charles disappears into the background and pretends he doesn’t know the bloke and Michael falls on his sword, and then when a decent period of time has elapsed he gets brought back in when no-one is looking.”

A spokesman for Scotland Yard said: “We are aware of the media reports and await further contact in relation to this matter.”