This shocking photo shows TEN ambulances queuing outside an overstretched A&E department with patients being treated inside the vehicles and in corridors. The line of vehicles waiting outside the Royal Cornwall Hospital highlights the deepening crisis within hospitals with patients being warned to stay away if possible. The lack of beds has been blamed on […] 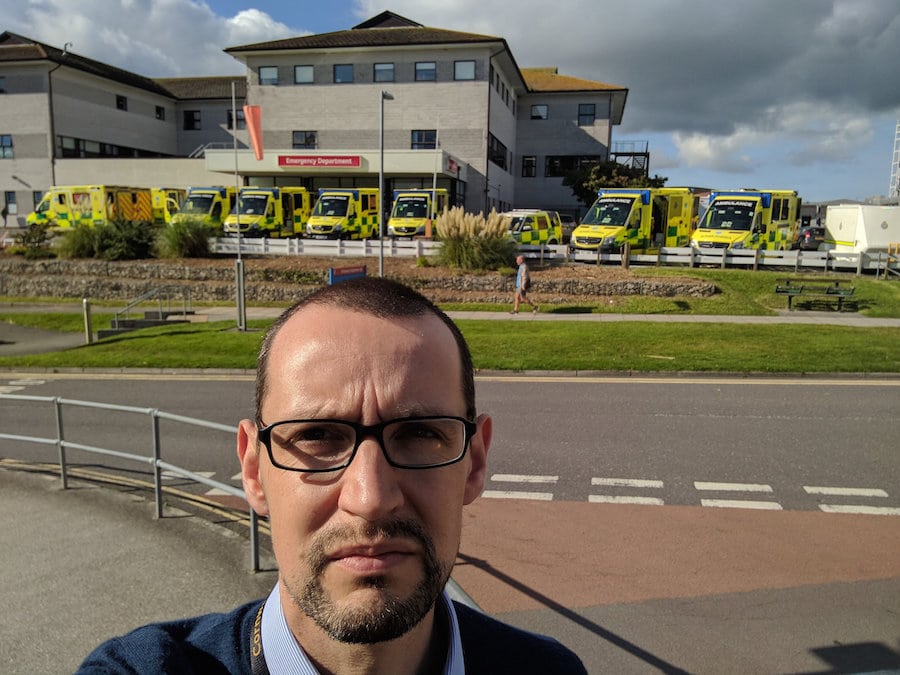 This shocking photo shows TEN ambulances queuing outside an overstretched A&E department with patients being treated inside the vehicles and in corridors.

The line of vehicles waiting outside the Royal Cornwall Hospital highlights the deepening crisis within hospitals with patients being warned to stay away if possible.

The lack of beds has been blamed on a combination of governments cuts in social care leading to ‘bed-blocking’ and the closure of local treatment centres.

Lib Dem councillor Colin Martin posted a selfie outside the Truro NHS hospital to raise awareness of what he described as a “dire” situation.

He also wrote a scathing appraisal on Facebook of the situation.

“Paramedics treating patients in corridors and even in an ambulance because A&E is full.

“More patients on trolleys in corridors waiting to leave A&E but wards are full.”

Patients were even warned to avoid the A&E department of the hospital as waiting times reached several hours.

And while some patients waited for treatment, others waited to be discharged – a problem Cllr Martin said was worsened by the hospital’s inability to provide homecare.

He added: “Patients in wards ready for discharge, but can’t leave because there’s no ‘package of care’ for them at home.

“Cornwall Council is responsible for home care, but have had central funding cut by 70 per cent in four years.

“Tory cuts to council funding are putting lives at risk and threatening to destroy the NHS.”

After visiting the hospital and speaking to staff there he added: “People going to A&E for the wrong things is definitely a problem, but the people I saw being treated in the corridors by paramedics weren’t there for small cuts and flu.

“Every doctor, nurse and manager I spoke to told me that delayed discharges due to lack of funding for social care was the number one problem.”

His post has sparked concerns, with visitors to the hospital sharing their own stories.

Jean Nicholls said she was in one of the ten ambulances photographed with her husband.

She wrote on Facebook: “Today I was there in one of those 10 ambulances with my husband, after he had a fall in the shower and he had to lie on the base of it for 3 hours waiting for an ambulance.

“We had a paramedic with us for two and a half hours, the whole team from start to finish were absolutely amazing.

“The government is where all the problems lie with severe shortage of funding.

“I believe something needs to change fast and I believe the government should pay a lot more for social care.”

Gill Vincent wrote on Facebook that she has seen a similar problem at the hospital.

She said: “It was the same two weeks ago when I took my daughter to A&E.

“No beds either when needing a day case procedure. But the (commissioning group) decided it was a good idea to close Bodmin Treatment Centre where 13,000 patients were seen and treated with excellent care and attention.

“Senseless! Where are all these patients going now? Adding pressure to the over stretched bigger hospitals.”

The Royal Cornwall Hospital NHS Trust has been asked for a statement.