He had collected a significant amount of far-right material. It included bomb-making instructions, ingredients for napalm, how to make Molotov cocktails, build an AK47 assault rifle, and engage in knife combat. 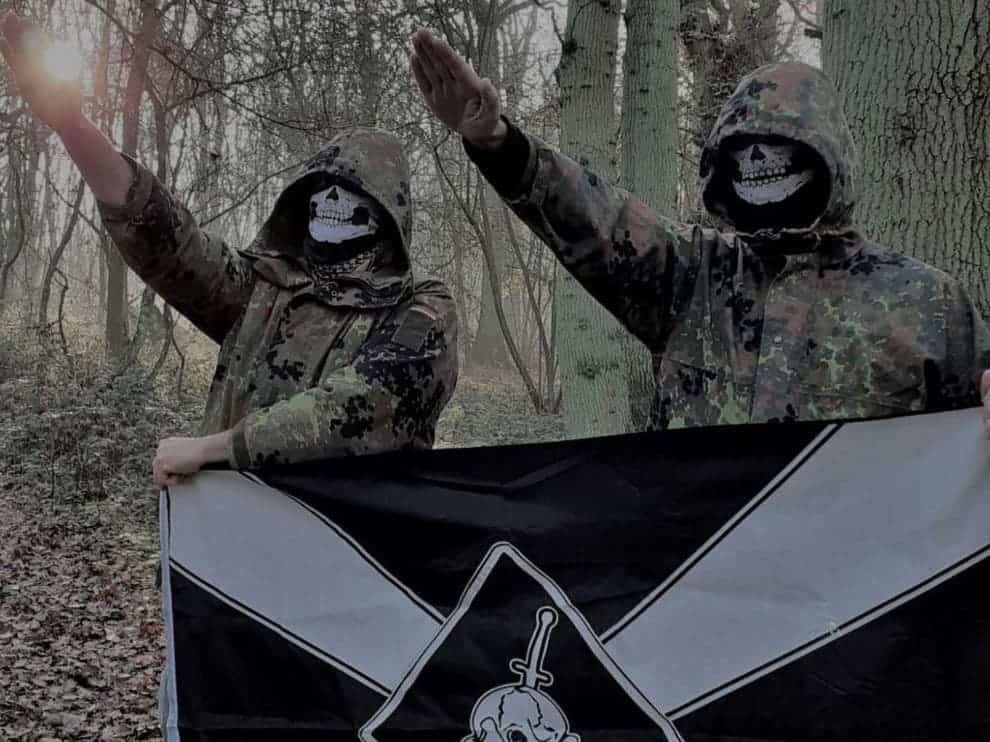 Two members of Feuerkrieg Division, not including the defendant, posing in a photo posted in an online chat(Eugene Antifa)

Britain’s youngest convicted terrorist, who led a neo-Nazi cell from his grandmother’s house, has avoided custody.

The boy was aged just 13 when he got his hands on instructions for explosives.

At the age of 14, the youth, from south-east Cornwall, amassed a stash of terror material and shared far-right extremist ideology in online chatrooms.

The defendant, who cannot be identified for legal reasons, was handed a 24-month youth rehabilitation order by Judge Mark Dennis QC at the Old Bailey on Monday.

The judge told the boy he had “entered an online world of wicked prejudice” and any reoffending would lead to a “spiral of ever-lengthening terms of incarceration” to protect the public.

He said: “You entered an online world of wicked prejudice and violent bigotry which has no place in a civilised society.

“You are now 16, coming on 17, years of age and any naivety or immaturity that may have played its part can no longer be put forward as an excuse.

“Any resurfacing of such prejudice or bigotry or engagement in such extremist activity will inevitably lead you in one direction, and that is in a spiral of ever-lengthening terms of incarceration in order to protect the public from such conduct. You now have the opportunity to put this behind you and to re-direct your future.”

The judge added: “The wider picture revealed in this case – the actions, words and violent extremist mindset of many young teenagers – is deeply concerning.

“It may be for some it is just words, bombast or exaggeration just to shock and thereby impress their peers and it is something from which they will move as they get older.

“For others it would no doubt lead to entrenchment of their mindset, escalation of conduct and in turn to acts of violence.”

The boy’s offences were committed over a prolonged period and involved the use of technology to conceal identity, the court heard.

However, the judge took account of his guilty plea, expression of remorse and that he was “susceptible to the influence others”.

Judge Dennis ruled out custody, saying it would undo the work that is already under way to rehabilitate the youth.

The defendant was described as “vulnerable” with an “abnormal childhood”.

At the time of the offences, he was living a “restricted and isolated” existence with his grandmother in Cornwall.

He was sentenced by video-link from Bodmin Magistrates’ Court and was supported by his grandmother, who held his hand.

The court had heard that, between October 2018 and July 2019, the boy had collected a significant amount of far-right material.

It included bomb-making instructions, ingredients for napalm, how to make Molotov cocktails, build an AK47 assault rifle, and engage in knife combat.

At the same time, he was active on online platforms – expressing racist, homophobic and anti-Semitic views.

In the summer of 2019, he became the British cell leader of the FKD – Feuerkrieg Division – a neo-Nazi group that idolises the likes of mass murderer Anders Breivik.

The defendant liaised with FKD’s 13-year-old “commander” in Estonia and was responsible for vetting and recruiting members and propaganda, it was claimed.

One of his five recruits was teenager Paul Dunleavy, who was convicted of terrorism offences relating to his activities as a member of FKD in 2019 and with whom he discussed the acquisition of firearms, the court was told.

The court heard that another of the recruits was in fact an undercover officer.

The defendant also commissioned a “Nuke London” poster which bore an image of an atom bomb cloud explosion over the Houses of Parliament with the slogan “Sterilise the cesspit that you call London”.

Police raided the defendant’s home on July 23 2019 as a result of information which suggested he had been trying to construct a weapon.

No weapons were found, but his mobile phone and computer were seized.

During the search, officers found a Nazi flag and a copy of a neo-Nazi text depicting post-apocalyptic sadistic violence.

In a police interview, the defendant, now 16, denied having had any racist, homophobic or anti-Semitic views, and said his comments and posts were just “to look cool”.

He claimed he had been considering leaving FKD for about a month, which was rejected by the prosecution.

Prosecutor Naomi Parsons had said the defendant’s young age was “alarming” and his conduct “betrays a maturity beyond his chronological age”.

In mitigation, Deni Matthews said the youth was “damaged” and had “sought approval by expressing views he certainly does not ascribe to now and was unlikely to have ascribed to genuinely at the time”.

In November last year, Dunleavy, 17, from Rugby, Warwickshire, was locked up for five-and-a-half years for preparing for acts of neo-Nazi terrorism.

Jenny Hopkins, from the Crown Prosecution Service, said: “People will rightly be disturbed that a 13-year-old should hold the most appalling neo-Nazi beliefs and start collecting manuals on bomb-making and firearms.

“He claimed not to have racist views and just wanted to appear ‘cool’, but the body of evidence led to him pleading guilty to possession and dissemination of terrorist material.”