Not sure what she's apologising for... 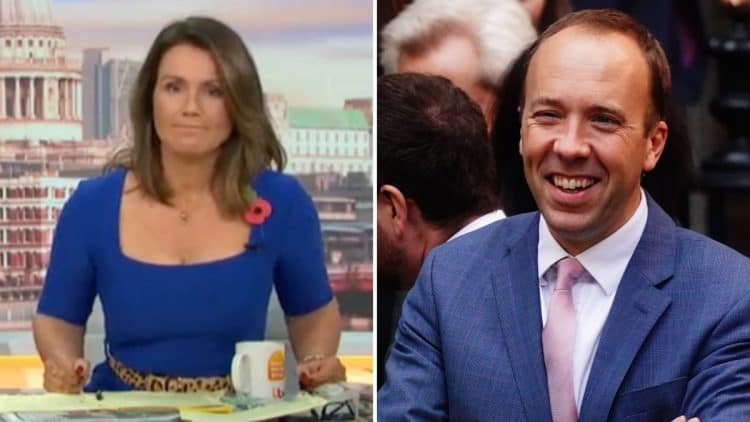 Susanna Reid was forced to issue an apology on live TV after a Good Morning Britain guest called Matt Hancock a “d***head”.

On this morning’s episode hosts Reid and Ed Balls discussed the news that the former health secretary will be heading to the jungle to appear on I’m A Celebrity… Get Me Out Of Here!

During Wednesday morning’s episode of the ITV show,  right-wing journalist Andrew Pierce, who works for The Daily Mail, made the comment about Hancock to Reid’s shock.

Reid jumped in: “No! Apologies, everyone.”

However, many viewers watching the moment seemed to find the outburst hilarious.

On Twitter, one commenter wrote: “Amazing moment on @GMB when @toryboypierce calls Matt Hancock a ‘d***head’.”

“Andrew Pierce had gone up in my estimation for calling Matt Hancock a d***head live on TV,” another tweeted.

One social media user wrote: “The use of the word d***head on daytime tv is totally acceptable when referring to Matt Hancock.”

Elsewhere in the interview, Pierce said that Hancock was a “laughing stock”.

Indicating at himself and fellow guest, Daily Mirror associate editor Kevin Maguire, he added: “We’ve known Matt Hancock for a long time. When they see him, warts and all, it will not be nice.”

This comes after a petition was started calling for Hancock to be removed from the upcoming series has racked up thousands of signatures in just a matter of hours.

On Tuesday (1 November), it was reported that the former health secretary will be jetting off to Australia and joining the ITV reality TV series as a “bombshell” contestant alongside comedian Seann Walsh.

Hancock was swiftly suspended by his party following the news that he would be a late arrival in the jungle this year.

The former health secretary has had the party whip removed “with immediate effect.”

Chief Whip Simon Hart MP said: “Following a conversation with Matt Hancock, I have considered the situation and believe this is a matter serious enough to warrant suspension of the whip with immediate effect.”

Many Tory MPs have predicted that Hancock’s stint on the show will mark the end of his political career.

A further 10 contestants have already been confirmed to be taking part by ITV, including Boy George, Mike Tindall and Jill Scott.

I’m A Celebrity… Get Me Out Of Here! returns Sunday 6 November at 9pm on ITV.