The panel overturned by a 5-4 majority a Louisiana state law imposing limitations on doctors. 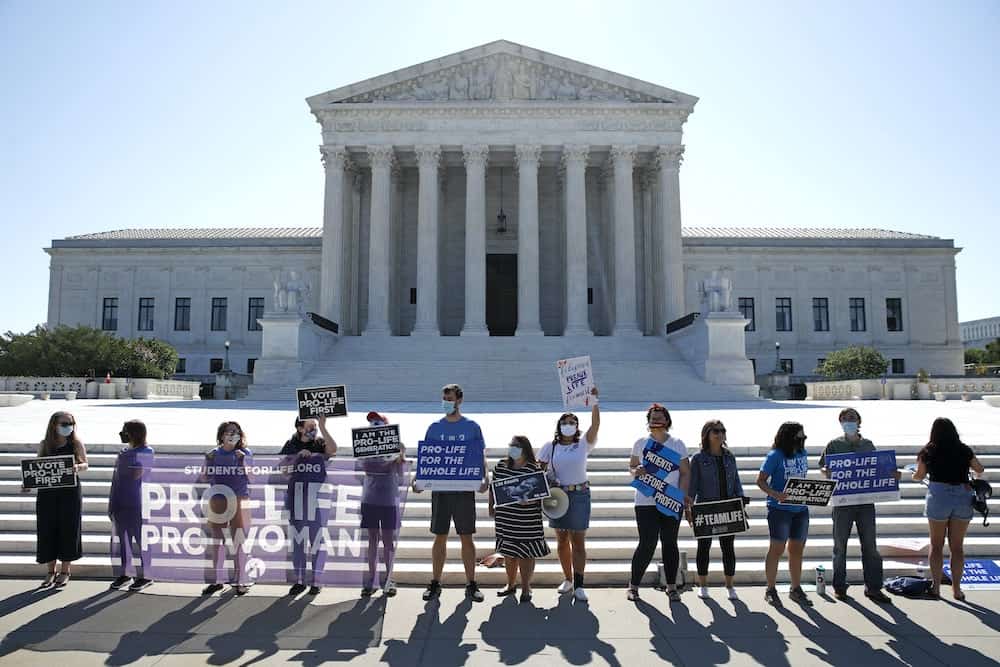 The Supreme Court, in a 5-4 decision, struck down a Louisiana law seeking to require doctors who perform abortions to have admitting privileges at nearby hospitals.

For both sides in the abortion debate, it was viewed as a momentous test of the court’s stance following Mr Trump’s appointments of two conservative justices, Neil Gorsuch and Brett Kavanaugh.

Both justices joined the conservative bloc’s dissent that supported the Louisiana law.

But they were outvoted because Chief Justice John Roberts concurred with the court’s four more liberal justices.

The ruling was yet another major decision in which the conservative-leaning court failed to deliver an easy victory to the right in culture war issues during an election year; one ruling protects gay, lesbian and transgender people from discrimination in employment, and the other rejected Mr Trump’s effort to end protections for young immigrants.

Now, anti-abortion leaders say there is an urgent need to reelect Mr Trump so he can appoint more justices like Mr Gorsuch and Mr Kavanaugh.

Abortion rights activists, with equal fervour, say it is crucial to defeat Mr Trump and end Republican control of the Senate, where the Republican majority has confirmed scores of conservative judges during Trump’s term.

Mr Trump’s Democratic Party opponent in the race for the White House, former vice president Joe Biden, has indicated his support for the pro-choice movement.

The Louisiana law “was an obvious challenge to our reproductive freedom, and it points to the urgent need to vote for pro-choice candidates from the top of the ballot all the way down”, said Heidi Sieck of #VoteProChoice, an online advocacy group.

James Bopp Jr, general counsel for National Right to Life, made a similar appeal, from an opposite vantage point.

“This decision demonstrates how difficult it is to drain the DC swamp and how important it is that President Trump gets reelected so that he may be able to appoint more pro-life justices,” Mr Bopp said.

Father Frank Pavone, national director of Priests for Life and a member of the Trump campaign’s Catholic voter outreach project, noted that two of the liberal justices, Ruth Bader Ginsberg and Stephen Breyer, are the oldest members of the court.

“Nobody can predict the future, but who’s going to name their replacements when the time comes? That is a question that motivates a lot of voters,” Fr Pavone said.

Anti-abortion activists swiftly made clear that Monday’s ruling would not dissuade them from continuing to push tough abortion restrictions through state legislatures.

In recent years, several states have enacted near-total bans on abortion only to have them blocked by the courts.

However, Texas Right to Life urged politicians there to press ahead with a proposed three-pronged measure that would start with a ban on late-term abortions and proceed to a total ban.

Monday’s ruling “highlights the need for pro-life states to pass laws that directly protect pre-born children in new and dynamic ways rather than get distracted on regulating the corrupt abortion industry”, a Texas Right to Life statement said.

Mike Gonidakis, the president of Ohio Right to Life, questioned the wisdom of pushing now for sweeping bans.

He noted that an Ohio bill sharply restricting late-term abortions had taken effect, while the courts blocked a measure passed last year that would ban most abortions as early as six weeks into pregnancy.

“We have to be methodical, strategic, and take an incremental approach,” he said.

The president of a national anti-abortion group, Marjorie Dannenfelser of the Susan B. Anthony List, said she and her allies would encourage states to continue pressing forward with proposed restrictions that stopped short of near-total bans.

“These measures are extremely popular in some battleground states,” she said.

“Prioritising them is part of our electoral strategy.”

Pro-choice advocate Nancy Northup, the chief executive of the Centre for Reproductive Rights, acknowledged that Monday’s ruling “will not stop those hell-bent on banning abortion”.

“We will continue to fight state by state, law by law to protect our constitutional right to abortion,” she said.

“But we shouldn’t have to keep playing whack-a-mole.”

She urged Congress to pass a bill called The Women’s Health Protection Act, which seeks to bolster women’s ability to access abortion even in states that pass laws seeking to restrict that access.

The measure was introduced in May 2019 and has strong Democratic support but no chance of passage for now due to Republican opposition.

From the other side of the debate, there also are dreams of a congressional solution.

Michael New, an abortion opponent who teaches social research at Catholic University of America, said some legal experts in the anti-abortion community believe Congress could find ways to restrict or ban abortion while circumventing the courts, for example by establishing constitutional legal protections for unborn children.

But any such measures are nonstarters for now, given that Democrats in Congress would overwhelmingly oppose them.

Whatever the strategy, New said, it would be important for the anti-abortion movement to be unified.

He recalled that internal debates decades ago over how to draft a human life amendment to the Constitution did a great deal of damage to the anti-abortion cause.

Johnnie Moore, an evangelical adviser to the Trump administration, said Monday’s court ruling would intensify interest in the election among religious conservatives who are a key part of Mr Trump’s base.

“Conservatives know they are on the one-yard-line,” Mr Moore tweeted.

“Enthusiasm is already unprecedented, evangelical turnout will be too.”