“It isn’t for any unaccountable, unelected Lord or Thatcher-wannabe Tory leadership contender to say when or if that referendum should happen.” 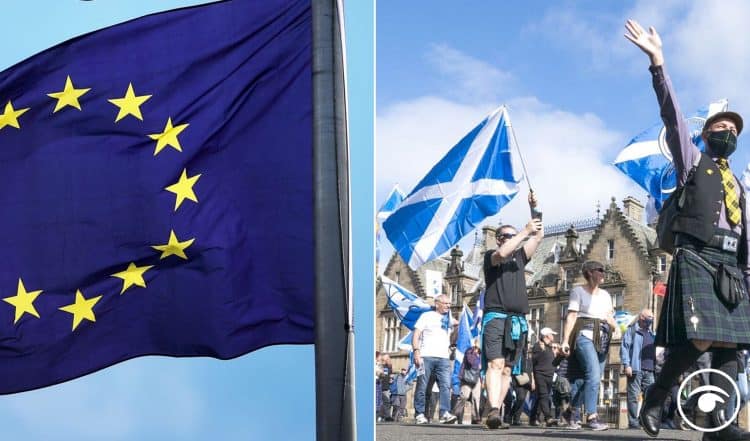 Support for rejoining the EU is soaring among Scottish voters, The Times has reported.

A new Panelbase survey for the newspaper has found that Scotland is even more opposed to Brexit than in 2016, when 62 per cent voted against.

Now 72 per cent say they would vote Remain, while 69 per cent, would vote to rejoin the EU — up from 61 per cent in January.

They also found that those opposed to Brexit are more inclined to back independence.

Discussing the possibility of IndyRef2, Brexit negotiator Lord Frost has made some pretty surprising comments.

Writing in the Daily Telegraph, he said three-quarters of MSPs should support independence before a new referendum is allowed.

Lord Frost also said those in favour of the union “need to start fighting back” against the SNP.

Among his suggestions is the setting of legal parameters for another referendum to be held.

“There needs to be clarity on the terms of a referendum – clarity which reflects the reality that it is wholly exceptional for states to allow their own dissolution,” he wrote.

“Lord Frost’s comments are a disgrace and fly completely in the face of the longstanding position unionists have supposedly held that Scotland is an ‘equal partner’ within the UK – a promise continually made before the 2014 referendum by the anti-independence campaign,” she said.

“His comments not only fly in the face of a decades long held position but, like Brexit, disrespect the vote in 2014.

“Frost’s comments expose the ugly reality beneath Tory rhetoric around Scotland being a valued partner and show that under Truss there will be a concerted plot to dismantle the devolution settlement the Scottish people voted for overwhelmingly 25 years ago.

“That move will be resisted at every turn by the SNP and increasingly by civic Scotland and the people of this nation.

“The people of Scotland voted for an independence referendum when they elected another SNP Government, and pro-independence majority Parliament, in 2021.

“It isn’t for any unaccountable, unelected Lord or Thatcher-wannabe Tory leadership contender to say when or if that referendum should happen.”