Thousands of petrol stations have run out of fuel with motorists facing long queues and panic buying. 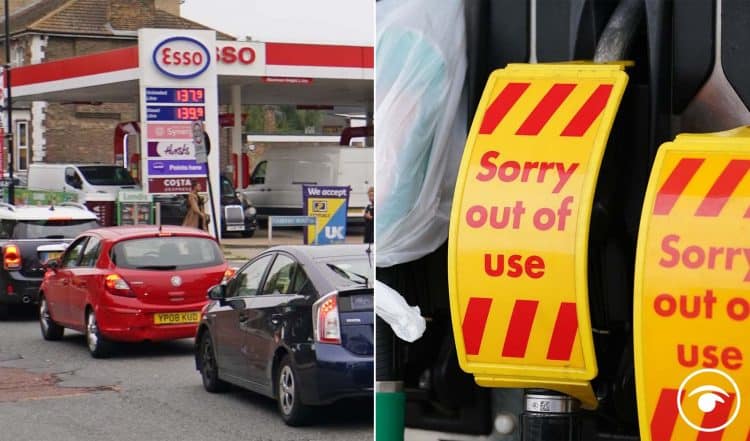 A supermarket petrol station is now only allowing emergency service workers to get fuel.

A Sainsbury’s in Kent has banned drivers from purchasing fuel unless they can show an ID that proves they are a key worker.

Thousands of petrol stations have run out of fuel with motorists facing long queues and panic buying.

This petrol station, which has a sign at the entrance to the forecourt saying, ’emergency services fuel only’, sits on the main road between Otford village and Sevenoaks Hospital.

There is an estimated shortage of around 100,000 HGV drivers in the UK, which has been made worse by the Covid-19 pandemic and Brexit.

It began on Thursday night as BP announced it was “experiencing fuel supply issues at some of our retail sites in the UK” and had to temporarily close a handful of sites.

On Friday, petrol stations were swamped as drivers began panic buying and causing congestion across the county.

This has carried on throughout the weekend leaving motorway services empty and the price of fuel began to soar.

Meanwhile, the government has announced plans to solve problems by offering a three-month temporary visa to off-set the shortage of HGV drivers – the main cause of the issues.

While some residents were angry they could not fill up their cars at the Sainsbury’s on Otford Road, others were happy the road would be clear from queues for ambulances to get to the hospital.

One person on Twitter said: “Well done Sainsburys in Sevenoaks. Big sign saying fuel for emergency services only – great work to have that sense.”

And another said: “A shame… but at least those who need it can hopefully get it.”