Shocking: ‘Energy bills’ included as a prize on This Morning’s Spin to Win

"Honestly I’ve never seen anything so tone deaf in all my life," Scott Bryan said. 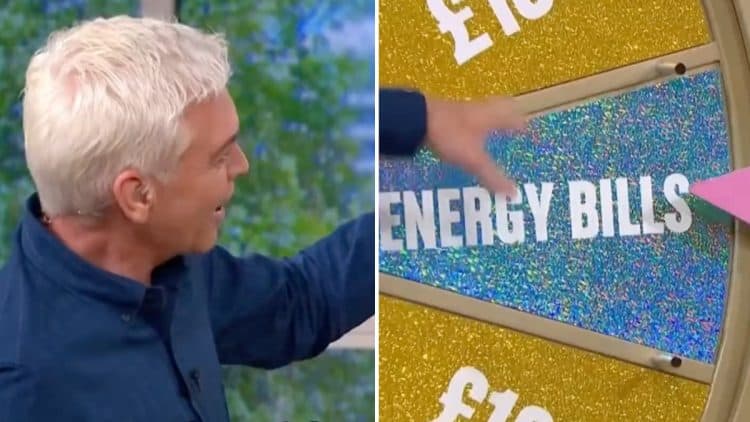 ITV’s This Morning show has become the latest media outlet to give us a dystopian glimpse of what’s to come in Britain.

With energy prices set to spiral out of control, the daytime programme responded by giving viewers a chance to have their bills covered over four months until the end of 2022.

The price cap will increase to £3,549 per year for dual fuel for an average household from 1st October 2022, with that number threatening to double by the start of next year.

At the end of last month, the Daily Mail offered their readers the chance to win their gas and electricity bills for a year in a move that was dubbed “dystopian”.

And now This Morning has followed suit.

Presenter Phillip Schofield explained the new addition to the glitzy wheel: “This week we’ve got our usual cash prizes, but you could also win some extra cash to pay your energy bills until the end of the year. That’s four months of energy bills taken care of.”

One of the callers was Alex from Enfield who answered the phone just after returning home from visiting his 93-year-old great aunt and went for the wheel.

When asked if he was worried about the cost of living crisis, Alex replied: “Massively. I’ve got one of these prepayment meters and it’s absolutely murder.”

“Well let’s hope it lands on one of those then,’ Schofield said as he spun the wheel which just managed to stay on the energy bill section.

Alex was delighted at his bills being taken care of as he said: “Oh my God! Thank you! Fantastic, what a relief, thank you very much!”

Viewers quickly took to Twitter to share their dismay, with people noting how it is a bleak reflection on the current state of the country.

Responding to the clip, Scott Bryan said he has “never seen anything so tone deaf” in all his life.