Have you ever seen a competition as ghoulish as this? Nothing sums up 'Broken Britain' quite like the Daily Mail's latest front-page offer. 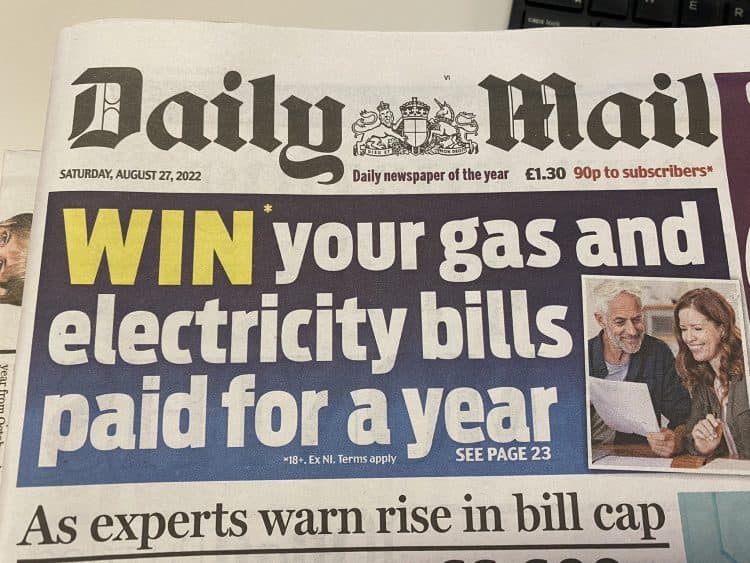 We’ve gone from ‘sunlit uplands’ to the chance of winning a very basic commodity within six years. It’s almost as impressive as it is ghastly. The Daily Mail is now, almost inexplicably, offering its readers an opportunity to win the cost of their energy bills ‘over the next year’.

It’s jaw-dropping that we have ended up here. Alas, this is the reality the UK is currently facing. The chancers at OFGEM confirmed that the energy price cap will rise by upwards of 80% in October – and then climb further in the new year.

It’s a move that will force millions upon millions of Brits into more than just fuel poverty. Many will be faced with a desperate choice between ‘heating or eating’ during the winter months ahead. Help from the government hasn’t been forthcoming either.

Too busy posturing in the Tory leadership race, neither Liz Truss nor Rishi Sunak have committed to a competent plan that will prevent this looming disaster. Instead, we’ve been treated to six weeks of arguments about pronouns and the French. Talk about priorities, hey?

Needless to say, the Daily Mail’s attempts to help can’t exactly be considered a solution, either…

‘Basic components for living’ are now a competition prize…

Soaring energy bills, if left unchallenged, will cripple businesses across the country. As for private households, the cost will be too much to bear. Movements such as ‘Don’t Pay UK’ and ‘Enough Is Enough’ are now encouraging citizens to resist any increase in payments.

Sadly, for many people, it’s a task that is easier said than done. Rather than being thrown to the wolves, the very least British people should expect is some form of protection from its elected leaders. Alas, the UK will remain rudderless until a new PM is chosen next month.

Colin MacFarlane is the Director of Stonewall for Northern Ireland and Scotland. The respected activist has slammed the Daily Mail and its grotesque competition, claiming that there is ‘now something deeply wrong with the world’. He can say that again…

“There is something deeply wrong with the world, when the bare minimum components needed for living are reduced to a mere competition prize in the Daily Mail.” | Colin MacFarlane