It comes as numbers of migrants arriving in the UK by boat during lockdown are approaching at least 1,000. 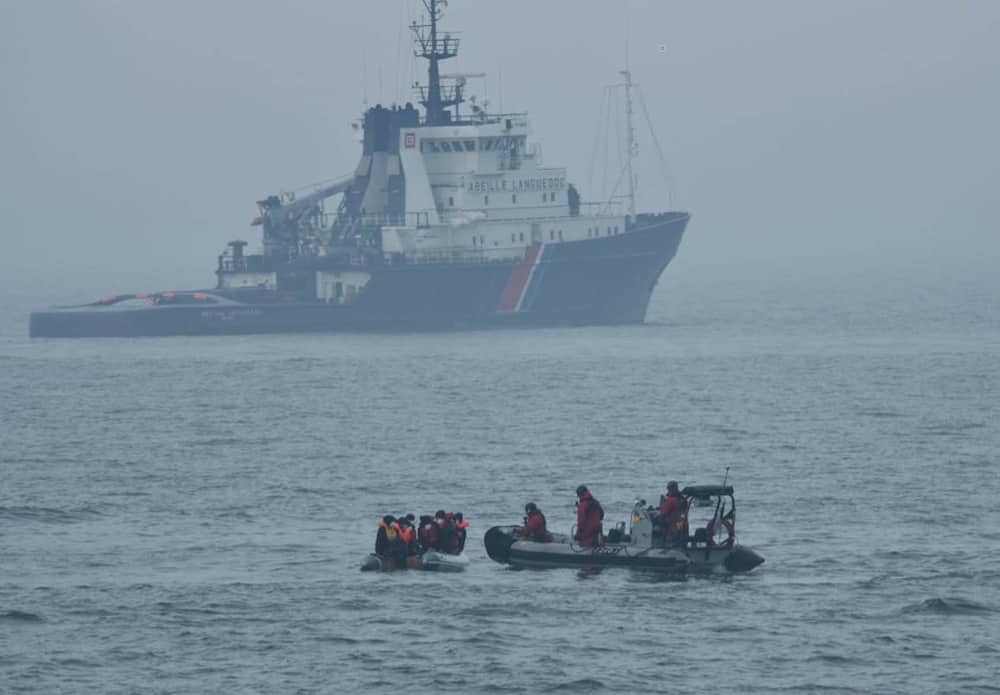 Handout dated 10/05/20 issued by PSP Cormoran / Marine nationale showing 10 migrants who were found on a boat off Boulogne-sur-Mer by French authorities.

Rising numbers of unaccompanied migrant children arriving at Dover by boat, who are then taken into care, are straining council finances already affected by the Covid-19 pandemic.

It comes as the number of migrants arriving in the UK by boat during lockdown is approaching at least 1,000.

Migrant children as young as babies have made the perilous trip across the Channel and been intercepted by Border Force this year.

Those that are “unaccompanied” – generally teenage boys – are taken into the care of the state.

Kent County Council leader Roger Gough has called for a “sense of urgency” from the Government on the crisis.

Speaking on Monday, he said the local authority is already facing an annual shortfall of nearly £1 million for services supporting unaccompanied child asylum seekers, and said this could rise.

So far in 2020, 160 children have been taken into care by Kent County Council.

“We certainly need a real sense of urgency on this.”

Currently there is no working mechanism to transfer children who seek asylum in Kent to other areas of the country, leaving the financial burden to fall on Kent County Council, he said.

And while the council receives support from the Government, Mr Gough said this has “seldom been adequate”.

As of May 11, 469 unaccompanied asylum seeking children are in the care of the council.

Additionally, 932 young adults who were UASCs but are now over 18 are still receiving support as care leavers.

The Coronavirus crisis has led to increased costs in taking care of the young people, which Mr Gough said already totalled about £900,000 for 2020.

Since the Covid-19 lockdown was announced in Britain on March 23, at least 992 migrants have been intercepted by UK authorities and brought ashore, according to data gathered.

More migrants are believed to have been brought ashore on Monday.

Bella Sankey, director of migrant charity Detention Action, said: “The sharp increase in vulnerable children crossing the Channel to seek sanctuary on our shores shows the Government’s strategy is failing.

“There are endless reasons these children may not feel safe in Northern France, yet instead of offering them safe routes to the UK, we’ve abandoned them to dangerous Channel Crossings, and fuelled criminal gangs.

“We need leadership and vision, not more tough talk and broken promises.”

Also on Monday, the National Crime Agency (NCA) announced that a 26-year-old man has been arrested as part of an investigation into the alleged smuggling of migrants into the UK.

The Albanian national was detained on suspicion of facilitating illegal immigration on the A2 near Cobham as he travelled towards London at around 7.30 on Saturday morning.

After being questioned by NCA investigators, he was released under investigation.

Two other men who were in the car with him, also believed to be Albanian nationals, were detained on suspicion of having arrived illegally in the UK within an HGV, the NCA said.