Kees Van der Pijl, who holds the honorary title of professor emeritus at Sussex University, shared the tweet with a link to the widely criticised "WikiSpooks" website. 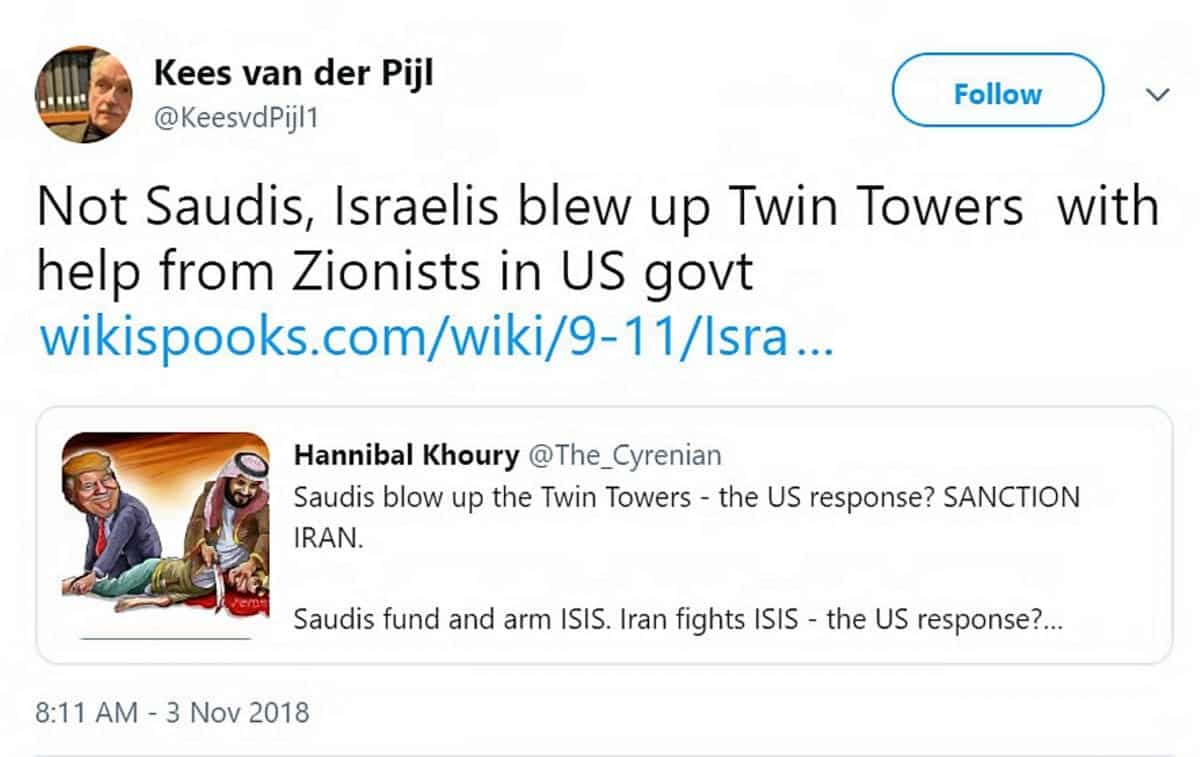 A senior university professor has come under fire for tweeting a debunked conspiracy theory that “Israelis blew up Twin Towers”.

Kees Van der Pijl, who holds the honorary title of professor emeritus at Sussex University, shared the tweet with a link to the widely criticised “WikiSpooks” website.

The link leads to a page titled “9-11/Israel did it” which claims to list “evidence that the Israeli deep state was involved” in the November 11 attack.

He tweeted: “Not Saudis, Israelis blew up Twin Towers with help from Zionists in US gov”.

Van der Pijl, who is the Dutch former head of the Department for International Relations at the university, has lived in Amsterdam for the last six years and no longer teaches there, a spokesman said.

But he was granted the honorary title, reserved for select professors, when he departed in 2012.

The spokesman was unable to say whether the university would reconsider the emeritus title over the professor’s views.

He said: “He’s a former member of staff he hasn’t worked at the uni since 2012 so this title, Emeritus professor, is given to academics sometimes when they retire.”

Van der Pijl is not on the univerity payroll but uses his Twitter biography to tell his 1,413 followers about his honourary role.

He also describes himself as an “Author, peace and democracy activist.”

A Twitter user, posting with the name Cor Poli, said: “@SussexUni do you accept crazy tinfoilers based on diversity policies?”

But others backed the professor, while some claimed the September attacks, which killed 2,996 people, were an “inside job”.

Van der Pijl has been approached for a comment.

He was a professor of international relations from 2002 until 2012, when he received several awards for contribution to the university.