An ozone layer just like that surrounding Earth has been detected surrounding a planet outside the solar system for the first time. The ‘sunscreen’ on the distant gas giant known as WASP-121b was identified by british scientists in groundbreaking research. It has a stratosphere – one of the main layers of our own planet’s atmosphere […] 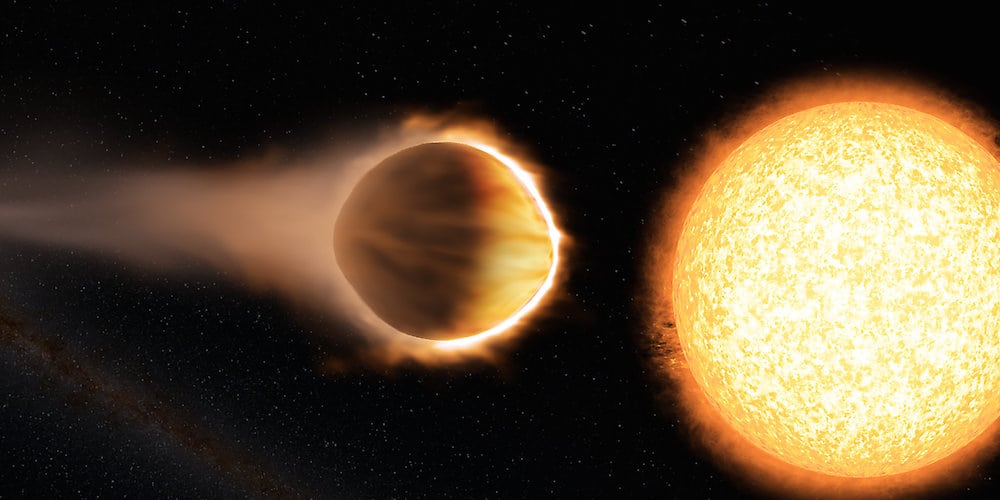 An ozone layer just like that surrounding Earth has been detected surrounding a planet outside the solar system for the first time.

The ‘sunscreen’ on the distant gas giant known as WASP-121b was identified by british scientists in groundbreaking research.

It has a stratosphere – one of the main layers of our own planet’s atmosphere – but is totally ununhabitable with temperatures hot enough to boil iron.

But the discovery reported in Nature could help identify other worlds where life could exist.

Co-author Professor David Sing, of Exeter University, said: “This new research is the smoking gun evidence scientists have been searching for when studying hot exoplanets.

“We have discovered this hot Jupiter has a stratosphere – a common feature seen in most of our solar system planets.”

In particular the atmosphere around the planet seems to be going through an Earth-like process known as temperature inversion. This is where atmospheric temperature increases with altitude.

It provides the sunscreen where radiation from the sun is blocked from getting to the surface.

The lower atmosphere above Earth’s surface is divided into two distinct regions – the troposphere and the stratosphere.

The latter contains the ozone layer which absorbs ultraviolet radiation from the sun – causing the stratosphere to heat up and exhibit a temperature inversion, whereby atmospheric temperature increases with altitude.

By contrast the temperature decreases with altitude in the troposphere.

The stratosphere described in Nature was detected by observing glowing water molecules above the surface with NASA’s Hubble Space Telescope. This suggests the existence of temperature inversion.

The planet lies about 900 light years from Earth and is a ‘hot Jupiter’ although with a greater mass and width than our’s making it much “puffier.”

he exoplanet orbits its host star every 1.3 days and is around the closest distance it could be before the star’s gravity would start ripping it apart.

This close proximity also means the top of the atmosphere is heated to a blazing hot 2,500 degrees Celsius – the temperature at which iron exists in gas rather than solid form. It would be inhospitable to life as we know it.

Many of the planets found around other stars to date are so-called ‘hot Jupiters’.

Astronomers have found hundreds – and they are scorching, with temperatures as great as 3,200°C (5,800°F) in the case of the exoplanet Wasp-33b, which is so close to its star that its year lasts just 29 Earth hours.

Dr Evans, a research fellow a Exeter, said: “Theoretical models have suggested stratospheres may define a special class of ultra-hot exoplanets with important implications for the atmospheric physics and chemistry.

“When we pointed Hubble at WASP-121b we saw glowing water molecules – implying the planet has a strong stratosphere.”

Other solar system bodies have stratospheres, too – methane is responsible for heating in the stratospheres of Jupiter and Saturn’s moon Titan, for example.

In solar system planets, the change in temperature within a stratosphere is typically less than 100 degrees Celsius. But on WASP-121b the temperature in the stratosphere rises by 1000 Celsius.

Co-author Dr Nikolay Nikolov, also at Exeter, said: “We’ve measured a strong rise in the temperature of WASP-121b’s atmosphere at higher altitudes, but we don’t yet know what’s causing this dramatic heating.”

Vanadium oxide and titanium oxide gases are candidate heat sources as they absorb starlight in a similar way to ozone.

They are commonly seen in brown dwarfs – ‘failed stars’ similar to exoplanets.

Previous research spanning the past decade has indicated possible evidence for stratospheres on other exoplanets.

But this is the first time glowing water molecules have been detected – the clearest signal yet.

Prof Sing and Dr Mercedes Lopez-Morales at the Smithsonian Institution have been awarded 800 hours to study and compare 20 different exoplanets – representing one of the largest time allocations for a single program in the entire 27 year history of Hubble.

Prof Sing said: “It’s a truly exciting find as we’re seeing dramatic differences planet-to-planet which is giving valuable clues in figuring out how planets behave under different conditions – and we’re only just scratching the surface of all the new Hubble data.”

NASA’s forthcoming James Webb Space Telescope will be able to follow up on the atmospheres of planets like WASP-121b with higher sensitivity than any telescope currently in space.

Co-author Dr Hannah Wakeford said: “This super-hot exoplanet is going to be a benchmark for our atmospheric models and will be a great observational target moving into the Webb era,”