Former Flight Sergeant Louis Godwin, 95 said: “It has been absolutely marvellous to come into this wonderful building and have this jab.” 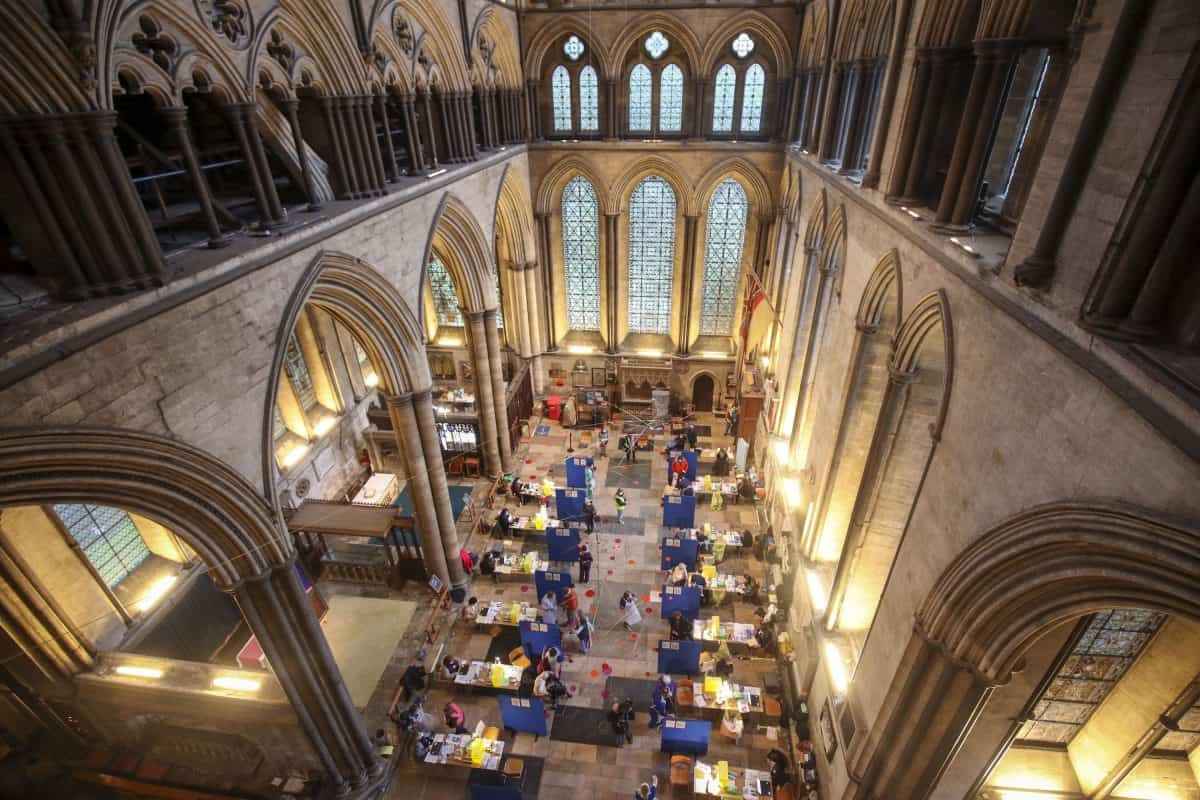 An RAF veteran was among hundreds of people aged over 80 to receive the Covid-19 vaccine at Salisbury Cathedral.

Former Flight Sergeant Louis Godwin, 95, gave a thumbs-up after being vaccinated in the cathedral, which dates back more than 800 years.

He described receiving the Pfizer/BioNTech jab as “absolutely marvellous” and “no trouble at all”.

Salisbury Cathedral opened its doors to patients from five local GP surgeries on Saturday, with the aim of vaccinating 1,000 people aged over 80.

It will serve as a venue for the Sarum South Primary Care Network Covid-19 vaccination service, with other over-80s due to receive their jabs on Wednesday and Saturday next week.

“It has been absolutely marvellous to come into this wonderful building and have this jab,” Mr Godwin said.

“I’ve had many jabs in my time, especially in the RAF. After the war, I was sent to Egypt and I had a couple of jabs which knocked me over for a week.

“This one, the doctor said to me ‘Well that’s done’ and I thought he hadn’t started. So it’s no trouble at all and no pain.”

Mr Godwin, who is a great-grandfather of 12, said the coronavirus pandemic had meant he could not see his family but he had been using FaceTime and Zoom to keep in touch.

He joined the RAF aged 18 in 1943 and was accepted as a trainee pilot but then found out the training would last at least a year.

“I thought ‘well the war is likely to be over by then’ so I opted for wireless operator/air gunner and ended up as an air gunner,” he said.

“I was trained and I was sent to Kinloss in Scotland where I joined a very experienced crew who had lost their air gunner unfortunately. I was able to complete my time flying with that Lancaster until the end of the war.”

Mr Godwin said the Second World War was “totally different” from the coronavirus pandemic, as people could meet, hug and kiss then.

“It was dangerous, especially whilst we were flying, but I lived right through the bombing near Southend-on-Sea in Essex, watched the Battle of Britain overhead, which convinced me I wanted to be up there with them as an 18-year-old,” he said.

“It was entirely different because this has divided people. You see each other virtually but I’ve got a very big family, I’ve got 12 great-grandchildren now from four months to 23 years.

“I don’t see them and they’re all growing up.

“This is a terrible virus and I would suggest that the vaccine is nothing, you don’t feel a thing, you don’t even feel the pinprick, so anybody that needs one and can get one, I would say go ahead and do it quickly.

“It’s the only way we’re going to beat the virus.”

NHS staff, patients and those accompanying them were treated to music from Salisbury Cathedral’s famous Father Willis organ throughout Saturday.

Graham Turner, 88, a chaplain at Salisbury Cathedral, wore his cassock to receive his Covid-19 vaccine.

He described the music as “marvellous” and praised staff as “terrific”.

“It is just a treat in every way,” Mr Turner said. “It’s a wonderful place to visit. I happen to be used to it and I feel I’m among friends.

“It’s such a relief to get the vaccine when you see every single night on television the sheer hell that so many people are going through. I feel very lucky to have it.

They queued for a short time around the cloisters before going into the cathedral.

The Very Rev Nicholas Papadopulos, Dean of Salisbury, said: “This place has stood here for 800 years to give glory to God, and to serve the city and the region.

“What better way could there be of doing that than hosting Salisbury’s stage in the vaccination programme. It is absolutely wonderful.”

He described the vaccines as “a real sign of hope for us at the end of this very, very difficult year”.

“I doubt that anyone is having a jab in surroundings that are more beautiful than this so I hope it will ease people as they come into the building,” he said.

“For me, it’s a wonderful coming together of what we do here because we think of this as the beating heart of this city.”This is a place where we pray every day for the healing of our nation and today some of that has been put into practice and is coming true. So it’s a very proud day for us.”

Dr Dan Henderson, co-clinical director for the Sarum South Primary Care Network, said that around 1,000 patients and staff would receive vaccines on Saturday.

He described the opportunity to vaccinate people in the cathedral as “incredible”.

“We chose it initially because of the vast amount of space here that allows good patient flow through and room for social distancing,” Dr Henderson said.

“It is a bonus to be in such a iconic, wonderful place. It’s great to be getting the vaccine out there and getting them in people’s arms and knowing that this is hopefully the start of some sort of normality again.”