Vladimir Putin said other countries attempts to interfere with the Russian action would result in “consequences they have never seen”. 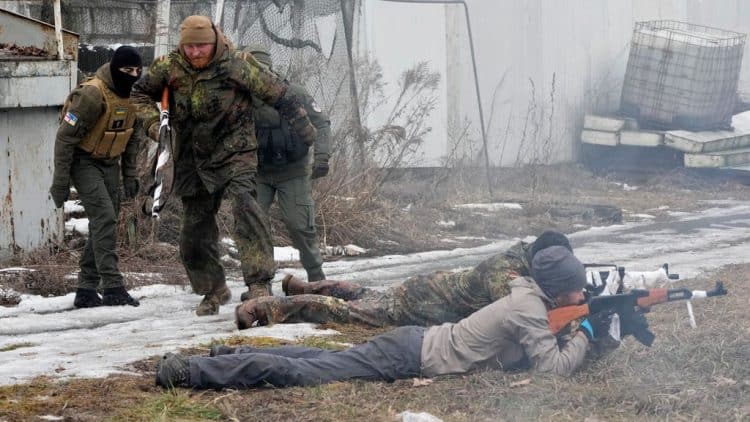 Ukraine’s foreign minister has accused Russia of starting a full-scale war after attacks were carried out on air bases and other military assets in the country.

In a televised press conference this morning, Vladimir Putin announced a “military operation” in the Donbas region, saying the move was a response to threats from Ukraine.

He said Russia does not have a goal to occupy Ukraine, but the responsibility for bloodshed lies with the Ukrainian “regime”.

He also warned other countries that any attempt to interfere with the Russian action would lead to “consequences they have never seen”.

Explosions could be heard in the Ukrainian capital of Kyiv shortly after Mr Putin’s address, while explosions were also reported in the cities of Odesa and Kharkiv.

The agency said that the Russian troops unleashed an artillery barrage as part of an attack backed by Belarus. They said the Ukrainian border guards were firing back, adding that there was no immediate report of casualties.

Defence Secretary Ben Wallace described Russia’s actions as “naked aggression against a democratic country” and said no one had been fooled by the Kremlin’s “false flags and fake narratives”.

“Despite the efforts of the international communities, Russia has chosen conflict. No one has been fooled by the Kremlin’s false flags and fake narratives.

“This is naked aggression against a democratic country which had dared to express a different aspiration than being a supine neighbour to Russia. No one should forget this day. Putin thinks this land grab is about securing his legacy – it will be, but not the one that he wishes.”

Prime Minister Boris Johnson said Russian President Vladimir Putin has “chosen a path of bloodshed and destruction” with his attack on Ukraine and that the UK and its allies would respond “decisively”.

In a statement on Twitter, Mr Johnson said he had spoken with Ukrainian President Volodymyr Zelensky to discuss “next steps”.

“I am appalled by the horrific events in Ukraine and I have spoken to President Zelenskyy to discuss next steps,” he said.

“President Putin has chosen a path of bloodshed and destruction by launching this unprovoked attack on Ukraine.

“The UK and our allies will respond decisively.”