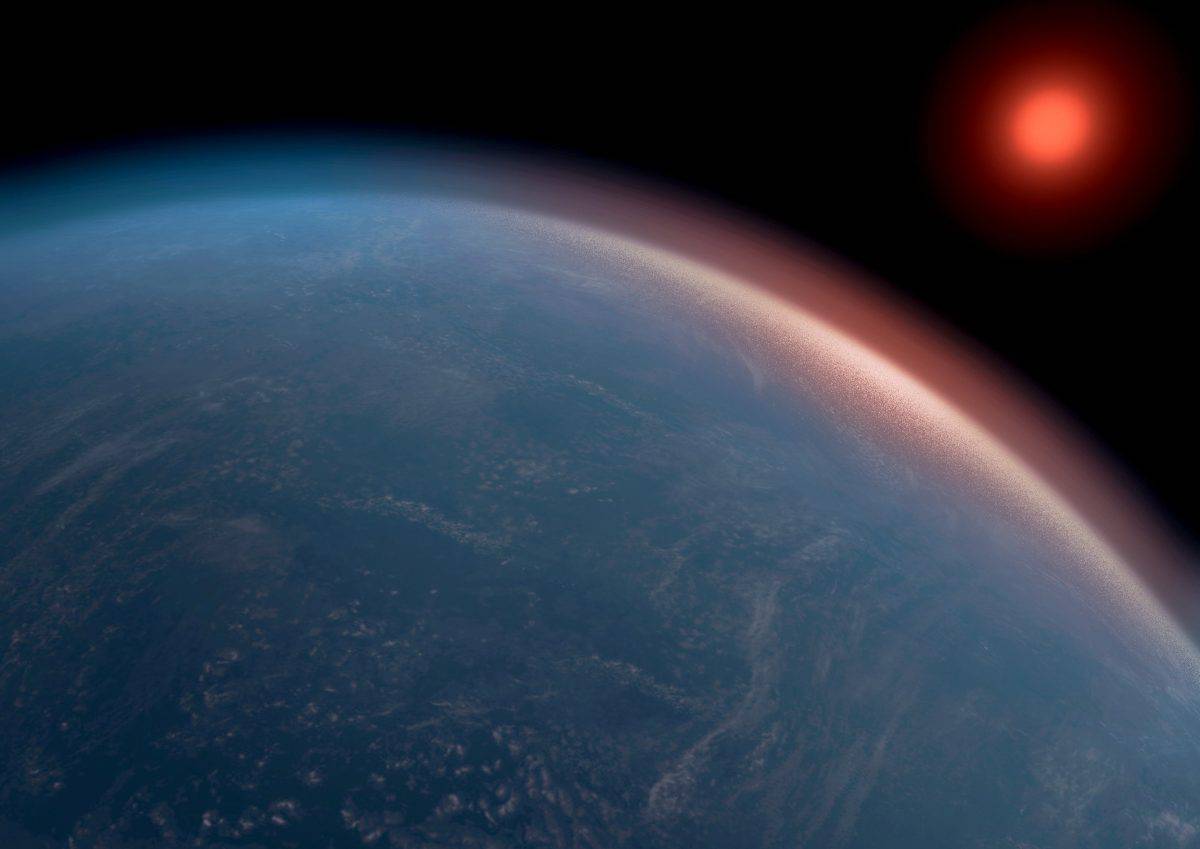 A rocky planet 124 light years away could have the right conditions to sustain life, say scientists.

It’s just over twice the size of Earth and orbits within its star’s habitable zone – meaning it could be a ‘waterworld’ of vast lakes and seas.

The ‘exoplanet’ has been named K2-18b, and is about 727 trillion [trillion = a million million] miles from us – a relative ‘short hop’ in cosmic terms but much too far to send a probe.

State-of-the-art space telescopes could discover if its hydrogen-rich atmosphere contains gases from alien organisms – before the decade is out.

Computer models suggest an ocean world – with liquid water below the atmosphere at pressures and temperatures similar to those found in our seas.

Now a new analysis has shown despite its size the ‘hydrogen envelope’ is not too thick.

It means the water layer could have the right conditions to support life, say the Cambridge University team.

They confirmed the atmosphere is hydrogen-rich with a significant amount of water vapour.

But levels of other chemicals such as methane and ammonia were lower than expected.

The next generation of space telescopes being launched this decade will be able to investigate if this is down to biological processes.

Lead author Dr Nikku Madhusudhan, of the Institute of Astronomy at Cambridge University, said: “Water vapour has been detected in the atmospheres of a number of exoplanets but, even if the planet is in the habitable zone, that doesn’t necessarily mean there are habitable conditions on the surface.

“To establish the prospects for habitability, it’s important to obtain a unified understanding of the interior and atmospheric conditions on the planet – in particular, whether liquid water can exist beneath the atmosphere.”

The researchers determined the composition and structure of both the atmosphere and interior for the first time using existing observations of the atmosphere.

They used detailed numerical and statistical models and took into account its radius and mass. These are 2.6 and 8.6 times greater than Earth’s, respectively.

K2-18b is in a planet category known as a “super Earth” – and has a temperature cool enough to have liquid water, between zero and 40C.

But given its size it’s been suggested it’s more like a small Neptune than a large Earth.

This is likely to have a significant hydrogen ‘envelope’ surrounding a layer of high-pressure water – with an inner core of rock and iron.

If the hydrogen envelope is too thick, the temperature and pressure at the surface of the water layer beneath would be far too great to support life.

But the latest findings, published in The Astrophysical Journal Letters, shows that is not the case.

Co-author Matthew Nixon, a PhD student at the Institute, said: “We wanted to know the thickness of the hydrogen envelope – how deep the hydrogen goes.

“While this is a question with multiple solutions, we’ve shown you don’t need much hydrogen to explain all the observations together.”

The researchers found the maximum extent of the hydrogen envelope allowed by the data is around six per cent of the planet’s mass – though most of the solutions require much less.

The minimum amount of hydrogen is about one-millionth by mass – similar to the mass fraction of the Earth’s atmosphere.

In particular a “number of scenarios allow for an ocean world,” said the researchers.

The study will also enable the search for habitable conditions and signs of life on planets outside the solar system that are much bigger than Earth – beyond Earth-like exoplanets.

Additionally, planets such as K2-18b are more accessible to atmospheric observations with current and future facilities.

The techniques used by the Cambridge experts can be refined further by using future observations from NASA’s James Webb Space Telescope.