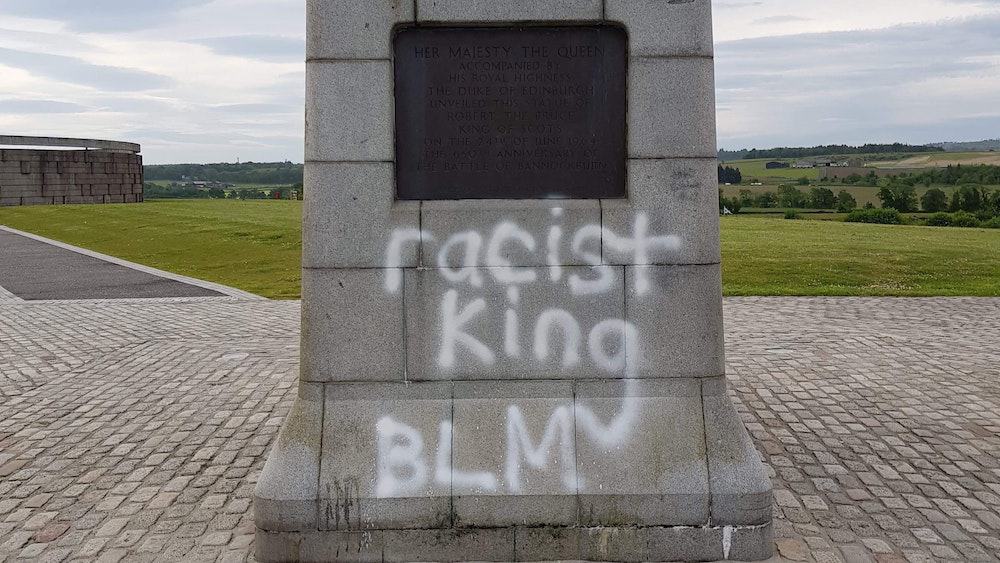 A statue of Robert the Bruce has been vandalised with graffiti labelling him a “racist king”.

The words “racist king BLM” have been sprayed in white paint on the plinth of the statue at the Battle of Bannockburn site in Stirling, along with “Black Lives Matter” on the ground in front.

On the wall of the A-listed rotunda nearby, the words “Robert was a racist” and “bring down the statue” have been scrawled.

The National Trust for Scotland (NTS) condemned the vandalism and said a contractor would clean off the paint.

Stuart Maxwell, general manager for NTS in Edinburgh and the east, said: “We are very disappointed by the vandalism of the iconic Bruce statue at Bannockburn and the A-listed rotunda.

“This comes at a time when our charity is suffering serious financial hardship and this is a cost we could do without.

“We would like to thank the local community for their support in responding so quickly to this incident.

“A contractor will visit the site this afternoon.”

Stirling Council leader Scott Farmer said: “We are disappointed to see the statue of Bruce vandalised in this way and are liaising with the National Trust for Scotland and our local heritage partners.

“To see such gratuitous vandalism against one of Scotland’s landmark statues is a senseless attack on a strong community and its history.

“This statue has no connection to the Black Lives Matter campaign and this attack could very well undermine the legitimate concerns raised by the BLM movement.”

It comes after the trust said the visitor centre at the site may not reopen until the 2022-23 season.

Some of its properties have been deemed unable to comply with social distancing or sustain running costs even after the initial threat of coronavirus.

A Police Scotland spokesman said: “We were made aware on Friday June 12 of vandalism to the Battle of Bannockburn heritage site, near Stirling.

Assistant Chief Constable Kenny MacDonald has previously said: “I am aware that vandalism of a small number of monuments and statues has taken place in recent days.

“Such action is criminal and will be fully investigated.”

Alyn Smith, SNP MP for the area, tweeted: “I’m aware with @RHBruceCrawford of vandalism at the Bannockburn site. @StirlingCouncil is on it and this will be cleared soon.

“I’ve been vocal in my support of #BlackLivesMatter and hope such counterproductive stupidity is an isolated incident.”