Assange is currently being held in HMP Belmarsh, awaiting the outcome of an extradition request by the US, where he faces 18 charges, including conspiring to hack into a Pentagon computer. Sweden dropped an investigation into Assange last year. 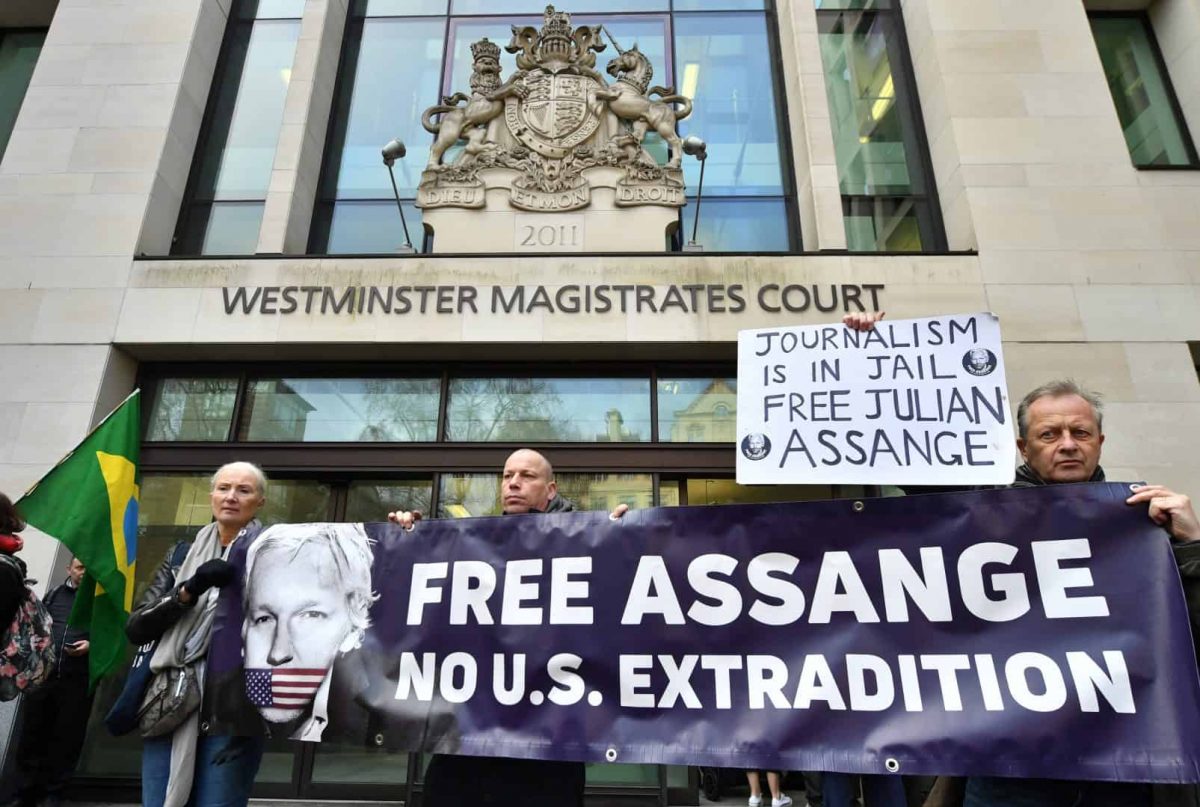 Julian Assange’s lawyers complained they had not been granted sufficient contact time with the WikiLeaks founder, when he appeared before magistrates ahead of an extradition hearing on Monday.

Assange, 48, backed by dozens of supporters including performer MIA, spoke only to confirm his name, his date of birth, and to briefly state he did not understand some of the proceedings, during a 12-minute hearing at Westminster Magistrates’ Court.

Julian Assange, wearing a black jacket, grey jumper, glasses, and with some stubble and his grey hair swept back, saluted his supporters in the public gallery as he was brought into court.

Later, he slowly raised his right fist to the sky as he was led to the holding cells, after District Judge Vanessa Baraitser granted his lawyer Gareth Peirce extra time with her client.

Assange is currently being held in HMP Belmarsh, awaiting the outcome of an extradition request by the US, where he faces 18 charges, including conspiring to hack into a Pentagon computer.

Ms Peirce told the court there had been a lack of contact time to speak with her client at high-security Belmarsh, something which threatened to delay the serving of evidence ahead of the trial, she said.

She said: “We have pushed Belmarsh in every way – it is a breach of a defendant’s rights.”

The district judge agreed to adjourn the hearing until the end of the day, in order to allow Assange and Ms Peirce a chance to sign off papers and go over their case together at court, rather than have Assange sent back to prison.

In November we reported over 60 medics writing to Home Secretary Priti Patel warning the Wikileaks founder “could die” in Belmarsh without “medical care.”

The doctors expressed “serious concerns” about the 48-year-old’s health and fitness to face trial.

In December a friend of Assange, journalist Vaughan Smith, said Assange revealed his health is worsening and said “I’m slowly dying here” in a slurred phone call from prison on Christman Eve.

Amid concerns for his mental state, health, and fitness to stand trial, another of his friends, the actress Pamela Anderson claimed she was threatened by a prison warden at Belmarsh on a visit to Assange. She recently said: “The warden stormed in and made it very clear to me, that if I were going to be a problem – he’d make problems for Julian. It was a direct threat.”

Australian Assange is accused of working with former US army intelligence analyst Chelsea Manning to leak hundreds of thousands of classified documents.

Assange was jailed for 50 weeks in May last year for breaching his bail conditions, after going into hiding in the Ecuadorian embassy in London to avoid extradition to Sweden over sex offence allegations, which he has always denied.

Swedish authorities dropped the rape investigation last year. He had been in custody since he was dramatically removed from the embassy building in April.

About 15 protesters maintained a vigil outside court, chanting Assange’s name and calling for him to be freed.

Such was the clamour for a seat in court that supporters queued for 30 minutes to get into the building, then filed in a line outside the first floor court number one, long before the case opened.

Rapper and singer MIA, real name Mathangi Arulpragasam, was among more than 40 people allowed inside the packed public gallery, all of whom were required to show security they had switched their phones off before entering.

Speaking outside court, the performer said: “I think it was important to follow this case.

“I am off to get a medal at Buckingham Palace tomorrow (an MBE for services to music) and I think today is just as important.

“To give somebody an hour to put their case together is not right.”