A new species of bird that lived in Germany almost 50 million years ago has been discovered – complete with the waxy oils it used to colour its feathers. The fossil was so extraordinarily well-preserved its preen gland – found in the tail of our modern feathered friends – was still intact. Most birds use […] 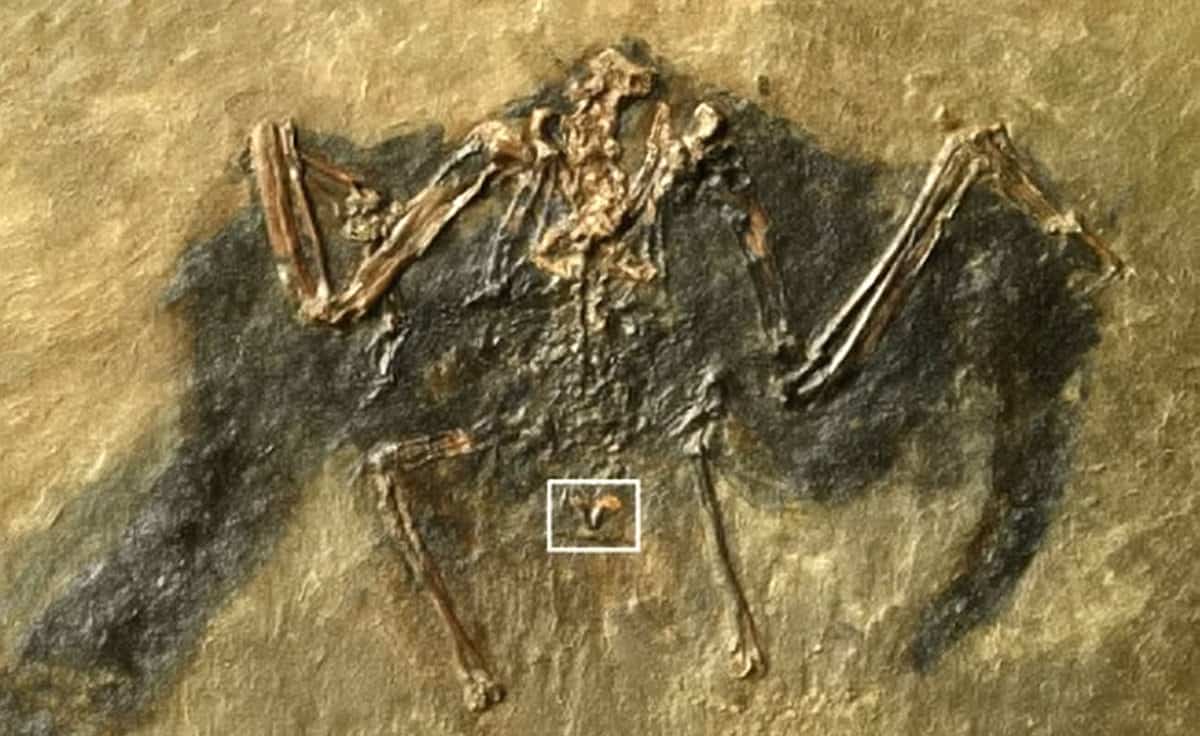 A new species of bird that lived in Germany almost 50 million years ago has been discovered – complete with the waxy oils it used to colour its feathers.

The fossil was so extraordinarily well-preserved its preen gland – found in the tail of our modern feathered friends – was still intact.

Most birds use their heads to rub protective oils from this gland over their feathers, legs and feet.

Flamingos in the wild even use pigments from these fatty tissues as ‘cosmetics’ – to enhance the colour of their iconic plumage and attract mates.

Dr Shane O’Reilly, of Massachusetts Institute of Technology, said: “This gland is situated at the base of the tail and secretes an oil that contains a variety of wax organic compounds that play an important role in preening – that is feather maintenance.”

He said the occurrence of animal soft tissue fossils is very rare but – when found – provide a remarkable window into past animal diversity and evolution.

Dr O’Reilly said: “Our study reports the exceptional molecular-level preservation of a fossil uropygial – or preen gland – from a 48-million-year-old bird.

Dr O’Reilly said the findings published in Proceedings of the Royal Society B could lead to re-analysis of fossils of dinosaurs and other animals.

He said: “Our study calls for more detailed molecular-level investigations of other animal fossils.”

Dr O’Reilly said lipids are particularly stable over time and may be expected to preserve in certain vertebrate tissues.

His team analysed the lipid residues from the preen gland of the early Eocene bird using a scanning technique called pyrolysis gas chromatography.

Dr O’Reilly said: “We found a pattern of molecules in the fossil gland that was distinct from the host oil shale sediment matrix and from feathers of the same fossil.”

By comparing them with chemicals from the preen gland of today’s blackbirds, ringed teals and woodpeckers they found they were produced in the same way.

Dr O’Reilly said the data showcase the resilience of lipids over geologic time and their potential role in exceptional preservation of tissues of large fossils.

The fossilised remains – including the gland and feathers – were dug up in the famous Messel Pit near Darmstadt in and belonged to a tiny bird that has never been described before.

It was a deep lake at the time and would once have been surrounded by lush sub-tropical forests supporting an incredible diversity of life.

Oil shale would have formed over a long period from mud and dead vegetation on the bed with low oxygen levels and little current disturbance making it ideal for preserving fossils.

The World Heritage site has revealed a snapshot of the Eocene Epoch 48million years ago when mammals became firmly established as the rulers of the land – with 45 species uncovered.

They include animals resembling primates, horses, marsupial possums, tapirs, rodents, bats and hedgehogs. There are also 43 species of birds, 31 species of reptiles and more than 10,000 fossil fishes.

Usually only fragments of bones are found but Messel has yielded up full skeletons and the outlines of entire bodies as well as feathers, hair and even stomach contents.

Dr O’Reilly said the bird is similar to the extinct Messelirrisor which lived in the forests of Central Europe during the Middle Eocene some 49 to 37 million years ago.

It’s not being named until the discovery of future specimens – including its skull and legs.

Dr O’Reilly said: “While fossilised lipids are common in the plant fossil record lipids from vertebrate fossils are rare.

“We report the first chemical characterisation of exceptionally preserved bird soft tissues that, based on their shape, size and anatomical position are consistent with being preen glands of birds.

“Despite clear structural rearrangement over time the fossil preen gland can be clearly distinguished at the molecular level.”

Previous research has found greater flamingos in the wetlands of southern Spain rub pigmented secretions from the preen glands near the base of their tails onto their feathers.

They use them to signal to potential mates by deliberately rubbing their cheeks against the preen gland and then immediately onto their neck, breast and back feathers.

Reddish-orange carotenoid pigments in the oils then brightened the signature pink hue of the birds’ feathers.